What do these three Civil War generals have in common?

Monday Morning Trivia. . . Obviously we could make all kinds of tenuous connections between various Civil War generals, but I'm looking for something fairly significant shared by these three Union officers. What's significant, you ask? I'll be the judge of that. 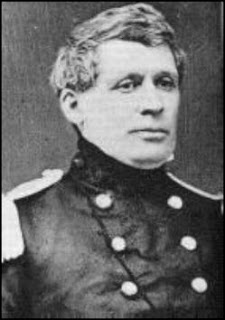 George Wright (left) is the other General Wright, the one who spent the entire war on the West Coast. He was an 1822 graduate of West Point, and decorated veteran of the Seminole and Mexican wars. By 1855 he was colonel of the 9th Infantry in the Far West, where he saw combat in various battles with Native Americans (e.g., the Yakima War). When the Civil War came, Wright commanded districts and departments before settling in as commander of the Department of the Pacific, freeing up E. V. Sumner for a return east. Tragically, Wright and his wife drowned at sea on July 30, 1865, in the wreck of the Brother Jonathan, the steamer transporting him to his new command, the freshly-minted Department of the Columbia. He was 63-years-old.

Albion Parris Howe (left) was an 1841 graduate of West Point, served with distinction in Mexico, and was under Robert E. Lee's command during the John Brown episode in Harpers Ferry. After the Civil War began, he commanded a brigade in the Seven Days Battles. For actions at Malvern Hill he was brevetted major, and in time was promoted to brigadier general. He commanded a division at Frederickburg and Chancellorsville, but saw little or no action at Gettysburg. Soon after the Mine Run Campaign, Howe was removed from command of his division, likely due to poor relations with Sedgwick, his corps commander (Howe testified in an unflattering way about Sedgwick to the Committee on the Conduct of the War). After the war he served with the commission that tried the Lincoln conspirators. He died in 1897 at age 78. 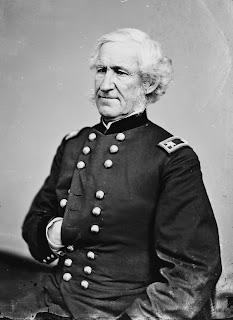 Lorenzo Thomas graduated from West Point in 1823, and served in the 4th artillery during the war with Mexico. For the eight years prior to the Civil War, he was chief of staff to General Winfield Scott. He was promoted to brigadier general during the Civil War, and served as adjutant general of the army throughout the war and beyond, until he retired in 1869. He was brevetted a major general in the regular army in early 1865, and after the war may be best remembered as the person President Johnson tried to replace Stanton with as Secretary of War. Thomas died in 1876 at age 70.

We are running a non-profit site; only for the sake of information sharing.

We would be pleased with your positive response. Looking forward for your reply...

Each had a son who died in service to the U.S. in the Modoc War.