The Southern version of history also prevailed for decades at Civil War battle sites, thanks to the fact that Congress appropriated money for the National Park Service, and Southerners in Congress had their hands on the purse strings. It wasn’t until the 1990s that the Park Service—under pressure from the academic community and a few members of Congress—made it a priority to revamp its exhibits to “interpret [the Civil War] and the causes of the war based on current scholarship,” said Dwight Pitcaithley, a professor of history at New Mexico State University who was chief historian of the Park Service from 1995 to 2005. In December 2008, Pitcaithley gave a talk to public school educators in Mississippi, and used as part of his presentation this quote from the Mississippi Declaration of Secession: “Our cause is thoroughly identified with the institution of slavery, the greatest material interest of the world.” That sentence is now prominently displayed on the wall of the National Park Service visitors’ center in Corinth, Mississippi, near the site of the battle of Shiloh. Pitcaithley took a picture of the display and used it in his presentation. After his talk, he was chatting with a thirty-four-year-old black school principal who had grown up in Mississippi, attended its public schools, and received his university education there. “I asked him if he’d ever seen that [quote] and he said no—he’d never even heard of that.”

Read the full article here:
Posted by dw at 2:04 PM No comments:

Dressing up like a rebel is not enough. You need to do your homework. 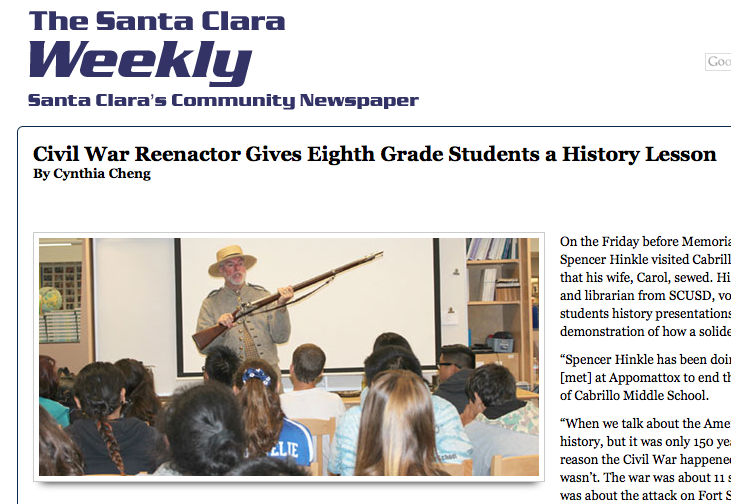 What’s with Confederate reenactors and the matter-of-fact denial of slavery’s central role in bringing about the American Civil War? Not a month goes by, it seems, without a news item quoting a reenactor expounding along those lines. Incredibly, they don’t settle for simply diminishing the role of slavery, as some apologists are wont to do. No, frequently they’ll proclaim that the war had nothing to do with slavery whatsoever.

It’s astonishing, and sad, that 150 years after the war, with all of the resources at our disposal, all of the painstakingly researched histories of that era, all of the primary source material that is increasingly being digitized and made accessible, we still have people putting forth this long-discredited, neo-Confederate fantasy.

Like the modern day holocaust denier, one must make a determined and willful effort to ignore or discount a great mountain of evidence to arrive at such a misguided conclusion. Even blinders allow a horse to see what’s in front of it, but the slavery-as-cause denier rejects even that.

It’s one thing to tell a reporter, as this reenactor did in Florida recently, "If people know their history, the Civil War has nothing to do with slavery." Discriminating readers can dismiss this nonsense as effortlessly as we dismiss “birthers.” But taking this alternate history into a classroom should not be so easily dismissed. It is an affront to education, and should be refuted.

Most recently I encountered an article about a Confederate reenactor who gave a brief “lecture” to a class of 8th graders in a Santa Clara, California middle school. I knew instinctively as soon as I saw the photo of the gray-clad rebel in a classroom that the article would put forth the great Lost Cause lie. And sure enough, it did.

Said the reenactor: “Most kids say the reason the Civil War happened was because of slavery, and I tell them it wasn’t. The war was about 11 states that wanted to leave the union, and it was about the attack on Fort Sumter.”

How do we know this? We know this because the secessionists themselves told us that.

Confederates of the day made no bones about this. They were forthright and unabashed about their motivations. Strange then, that people who today dress up like pretend Confederates have come up with an interpretation contrary to that of the secessionists themselves.

I defy any one of them to sit down and read Charles Dew’s, Apostles of Disunion. The first states to secede sent ambassadors to the other slave states to try to convince them to secede. Here we have Southerners speaking to each other in their own words. Their unmistakable message is that the only “state right” under consideration was the right to maintain and perpetuate slavery.

Professor David W. Blight, in his essay, “One Rebel State Never Surrendered: Denial — Confederates’ Own Words Condemn Their Cause,” wrote:


“The best way to understand why secession and war came in 1860-61 is to look at what white Southerners themselves said they were doing. How did the leaders of secession explain the origins of the war?

South Carolina's "Declaration of Causes" justifying secession included the claim that the Republican Party would "take possession of the government the South shall be excluded from the common territory and a war must be waged against slavery until it shall cease throughout the United States."
Texas secessionists proclaimed their greatest fear in the crisis as "the abolition of slavery" and "the recognition of political equality between the white and negro races."

In Mississippi, secessionist delegates unanimously announced that their "position is thoroughly identified with the institution of slavery." The Mississippians declared that they "must either submit to degradation and the loss of property worth four billions of money, or we must secede from the Union."

Georgians agreed, accusing "abolitionists and their allies in the Northern states" of "efforts to subvert our institutions, and to incite insurrection and servile war among us."

Blight also quoted John Mosby, the legendary “Gray Ghost,” who said after the war, “"I always understood that we went to war on account of the thing we quarreled with the North about. I never heard of any other cause of quarrel than slavery."

That pretty well sums it up.