For the American Civil War history buff, one of life’s great pleasures is tramping around battlefields and associated sites with the preeminent historians of our time. And for Grant’s Vicksburg Campaign, you can do no better than to accompany Terry Winschel on a three-day excursion. Last weekend Terry led a small group of enthusiasts all over the map, from Chickasaw Bayou, to Grant’s Canal, to Grand Gulf and Port Gibson, to Champion Hill and the Big Black—in to Vicksburg itself, and the siege lines encompassing the Confederate Gibraltar.

This was my fourth visit to Vicksburg (one previous tour with Ed Bearss, author of the ultimate Vicksburg campaign study), and I was struck again and again over the weekend by fresh revelations. The campaign was so long, and so convoluted, it challenges even devoted students. The geography of the area—including the ever-changing river—fairly demands a personal visit for one to begin to appreciate the chess match played out by Union and Confederate forces.

Upon my return to California, it dawned on me that it’s been 25 years since Ted Savas and I brought out volume two, number one of Civil War Regiments, devoted to Vicksburg. Terry wrote a couple of articles for that issue, including “The First Honor at Vicksburg: The First Battalion, 13th U.S. Infantry,” and last weekend we visited the Stockade Redan to recount Uncle Billy's assault there, when the colors of the 13th were advanced to the ditch in front of the formidable Confederate works (of the ten members of the color guard, nine were killed or wounded).

As Ed Bearss writes in the introduction to the Vicksburg issue, the motto of the 13th U.S. Infantry remains today, “First at Vicksburg,” and the unit’s badge honors their service on May 19, 1863: “There is the cross from the Confederate battle flag with the colors changed from blue to red and the shoulder straps of the two future generals associated with the regiment at its organization—William T. Sherman and Philip H. Sheridan, the former as its colonel and the latter a staff officer.”

Also in that issue was Jeffry Burden’s superb article, “Into the Breach: The 22nd Iowa Infantry at the Railroad Redoubt.” Burden relates one of the most celebrated exploits of a storied regiment, when a handful of men under Sergeant Joseph Griffith temporarily breached the Railroad Redoubt and captured a dozen prisoners. Visiting the Railroad Redoubt again last Sunday, to hear Terry’s account of the action there, was a thrill. Vicksburg is one of the campaigns about which I have read a great deal, but all these years later I’m still learning something new, as if only now beginning to tackle the subject in earnest.

This is why I will keep traveling to the historic sites, walking the ground, and seeing it with my own eyes. And this is why the preservation of our historic sites is so important. Once it’s gone, it’s gone for good.

Below are some of my early attempts at map-making, to accompany the Winschel and Burden articles a quarter century ago (click to enlarge). 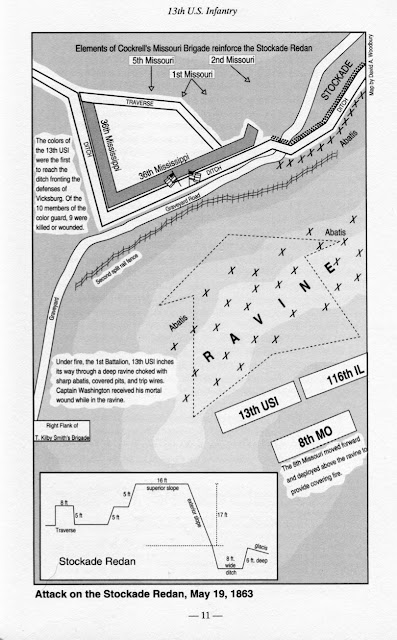 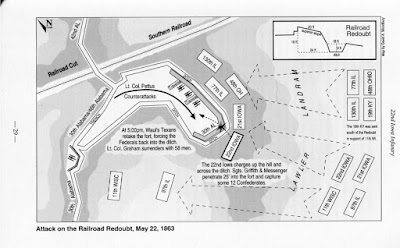