Virtual Hike to the Roulette Farm 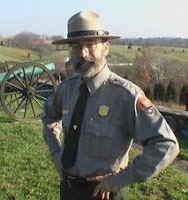 Ranger Mannie at Antietam continues to maintain one of the most interesting blogs around—My Year of Living Rangerously—a perfect marriage of unfettered passion, zero politics, rich & unjaded humor, exceptional skill with a camera, and the sensibility to highlight glimpses of beauty and wonder in the ordinary landscapes of our everyday world. All the better that his everyday world is the battlefield at Antietam.

This post is another keeper.
Posted by dw at 1:48 AM 2 comments:

Odds and Sods — recent items that caught my eye 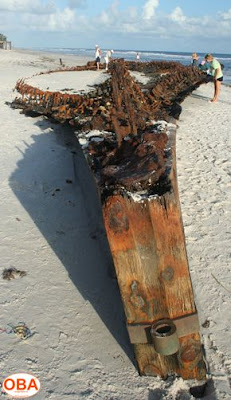 The Fort Morgan Mystery Ship
The last time this mystery ship was visible was after Hurricane Ivan hit the Alabama Gulf Coast on September 16, 2004. At that time a much smaller portion of the ship was visible above the sand. Soon after Ivan revealed this historic treasure, the shifting sand covered the relic again. [many photos]

Lehman Brothers: Cotton Speculators, Confederate Sympathizers
Lehman Brothers, the storied investment firm that filed for bankruptcy protection yesterday, was no stranger to crisis. Early in its 158-year life, the firm was nearly crippled by the Civil War. But back then there was some cotton to cushion the fall. [photo]

Casualties of Valverde?
“We know 27 Confederate soldiers died in the old hospital in 1863 following the Battle of Valverde, and all the evidence as to where they were buried points to the old graveyard where Peralta Drive is now,” he said in 2004. “These human remains and the decayed wood bring us one step closer to identifying who is buried under the street and in the adjacent lot.”

Confessions of a Teenage Civil War Reenactor
I hid my family’s secret hobby from my schoolmates like we were Russian child-bride smugglers.

Kansas Before Massachusetts
About 30 volunteer members of a Kansas regiment were patrolling the land about five miles southwest of Butler, in western Missouri's Bates County that October day in 1863 when they were ambushed by about 130 rebel horsemen near Island Mound, a low hill near the Marais-des-Cynges River. The Kansas soldiers drove off their attackers in a brief skirmish.The significance is that this was the First Kansas COLORED Infantry. This fight was the first time that black soldiers went into combat on behalf of the Union during the Civil War.

Idiot Removes Tag
On September 1, Stover's Auctions reported the theft of a tag that was affixed to an important Civil War lot with multiple items from a captain in the battle of New Bern, N.C. A sword was included, which had an old cloth tag attached to it from the same captain. The tag would add roughly $2,000–$3,000 to the lot. [photo]

The Other Burns? That would be Ric
"The night before 'The Civil War,' we thought it was going to be a failure," confessed Ric Burns, who co-produced and co-wrote the colossal documentary series for his brother, Ken. "Who would watch a program stitched together from old photographs?"

Badges and Courage
Tobruk is loosely based on Stephen Crane’s classic American Civil War novel The Red Badge of Courage, and anyone familiar with Crane’s book will appreciate Marhoul’s homage. If there is a flaw to this film it’s that, unlike with Crane’s central character, Henry, audiences can’t always be certain whose story Marhoul wants us to follow.

The Buffaloes of North Carolina
The Civil War in that part of North Carolina was not the war of waving the Confederate Stars and Bars or the Union Stars and Stripes, of masses of men in butternut or blue charging up slopes toward some “little clump of trees,” or standing toe-to-toe in bloody musket volley fire.

It was more like a backwoods bushwhacking or a shootout in a snake-infested swamp along the Chowan River. It was a nighttime raid on a hog farm to drive off critters meant to supply bacon for the Army of Northern Virginia, or to burn a creekside warehouse where cured bacon was already stored.

Interview with David Williams of Valdosta State University
Q: When they couldn’t feed their families, Southern women started food riots. There was a big one in Richmond. Were there any in Georgia?
A: Every major city in Georgia had food riots. We’ve documented more than 20. In Atlanta, a woman walked into a store on Whitehall Street and drew a revolver and told the rest of the women to take what they wanted. They moved from store to store.

Really cool 35-star flag discovered
At 21-feet-long and 15-feet-wide, the flag surely wasn’t missed when it flew 70 feet above the Civil War monument at Rocky Point in West Boxford. [photo]

From the Diaries of My Father
June 19, 1862: To-day I shot 654 passenger pigeons. That axe I bought from that lousy trapper has a rotten handle. I think the dog has typhoid. I like living in a sod house. Is civil war imminent?
May 11, 1866: D—n! I just found out about the Civil War! That's what you get when you print a news-paper hundreds of miles from civilization, I suppose. To-day I shot 1,297 passenger pigeons.