The Story . . .
While processing the records of the Military Order of the Loyal Legion of the United States, New York Commandery, we came across a poignant relic of the Civil War: a note passed between the lines at the Battle of Antietam, one of the bloodiest battles in the history of the nation.
The note was sent to the Loyal Legion by Union Captain William J. Carlton, who explains in an accompanying letter that while he was posted “in front of the little Dunker church” – the site of some of the sharpest fighting of the battle – a Confederate soldier approached with a flag of truce and handed over a note asking for the body of confederate Lieutenant Paul Newton.  The note, signed by Colonel A.H. Colquitt – a Georgian who after the war was elected to the U.S. Senate — describes Newton as “tall and well proportioned, has … blond hair and mustaches, with 2 stars on the collar of his coat.”
Carlton took the note to Union Generals William B. Franklin and Henry Warner Slocum, who agreed to comply with the request, and the body was sent across the lines.
The story doesn’t end there, though.  In a sad postscript, Carlton notes that the following morning, after the Confederates retreated into Virginia, he saw the body of Paul Newton with a number of other dead Confederate officers left abandoned on the field: “evidently they had not the means of transportation and had to leave their fallen comrades to be found in unknown graves.”
Click here to read the full article
Posted by dw at 7:29 PM No comments: 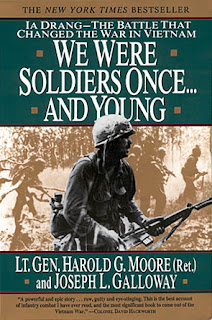 "You see, for Rick Rescorla, this was a natural death. People like Rick, they don’t die old men. They aren’t destined for that and it isn’t right for them to do so. It just isn’t right, by God, for them to become feeble, old, and helpless sons of bitches. There are certain men born in this world, and they’re supposed to die setting an example for the rest of the weak bastards we’re surrounded with."


Quoted from this New Yorker article from 2002, featuring Rescorla: "The Real Heroes are Dead, A Love Story," by James B. Stewart. Rescorla died on September 11, 2001 in the terrorist attack on the World Trade Center towers, while helping others to safety.

He is the soldier pictured in the foreground of the dust jacket photo on the Moore and Gallagher book, We Were Soldiers Once and Young.
In this 8-minute video, Rescorla discusses the Ia Drang battle (Vietnam War), and the future of warfare (terrorists).
Posted by dw at 3:37 PM No comments: