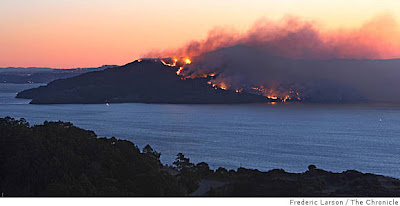 Approximately 2766 miles west of the spot where General John Reynolds was KIA on July 1, 1863, the Civil War installation named Camp Reynolds in his honor nearly burned to the ground 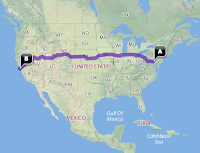 last week. A wildfire on Angel Island in San Francisco Bay came within 100 yards of the Civil War buildings, but firefighters were able to save Camp Reynolds and all 120 historic structures on the island.

Angel Island, inhabited for 1,000s of years, has a recorded history back to the visit of the first Spanish warship, the San Carlos, in August of 1775. It was fortified during the Civil War to guard against Confederate raiders, was a processing point for soldiers in both World Wars, served as the "Ellis Island of the West" for 60 years, and hosted a Nike missile base in the Cold War era.

For the past 46 years it has been a bucolic state park, accessible by ferry from nearby Tiburon. Thanks to the expert work of firefighters, the entire Civil War era installation was preserved intact. From an article in the San Francisco Chronicle,

"The grass will grow back, but the Civil War barracks? They won't grow back," said Todd Lando, spokesman for the Marin County Fire Department, which led the fire response.
"It was just a very good thing that we managed to save them. It's where we focused most of our attention Sunday night." Half of the oaks, pines, manzanita and brush that until Sunday covered most of the island like a green cloak are gone—400 of the area's 740 acres are burned flat, Lando said. Most noticeably, Mount Livermore—the island's highest point at 788 feet—has been stripped of its leafy crown and stands bald and ashy."

The (Frederic Larson) photo at top shows the fire as seen from Marin County. The map, and the (Brant Ward) photo below show the extent of the fire, and how close it came to the Civil War buildings at Camp Reynolds. Close one! 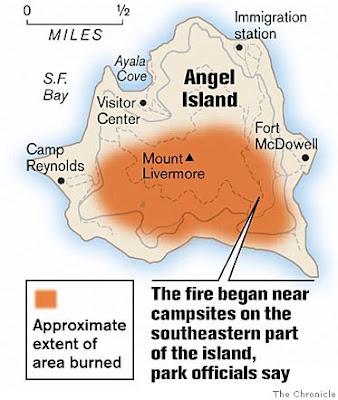 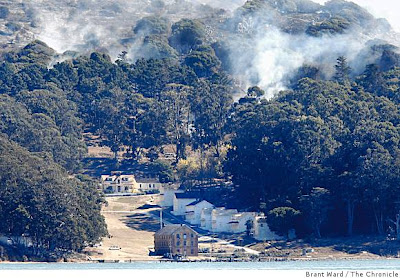 While we're on the subject of islands on San Francisco Bay, I couldn't resist sharing this stunning (Michael Macor) photo from the recent Fleet Week 2008 festivities, showing the Blue Angels against an Alcatraz backdrop (part of Angel Island is visible the background). The Civil War defenses on Alcatraz island, first discussed in this blog entry would not have fared well against today's naval assets. 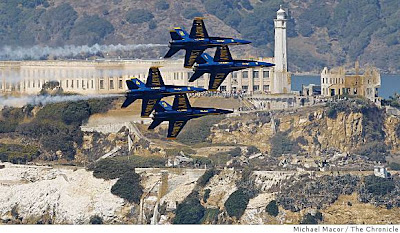 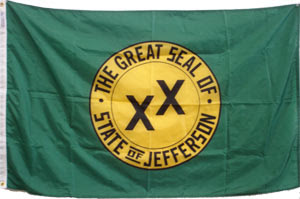 (unless you were with Tom Clemens two weeks ago)

Brian Downey over at Behind AotW has put together one of the most interesting campaign-related blog entries I've ever read.


On the Trail of the Corn Exchange Regiment

146 years to the day after the historical events, a lucky group of us tracked the unlucky 118th Pennsylvania Volunteers to the places and views of the Battle of Shepherdstown Ford (20 September 1862). Under the capable guidance of Dr Tom Clemens and members of the Shepherdstown Battlefield Preservation Association (SBPA), we waded the Potomac, scaled the heights, and walked the field.

Most interesting are descriptions of the river bottom (rocky, not muddy, with stretches of smooth, wagon-friendly slabs of stone). Twelve years ago, the Civil War Forum folks at CompuServe held their inaugural annual gathering at Antietam, with Tom Clemens as our guide. He's as good as they get. If Tom can be imposed upon to reprise this river crossing, I'll be on board for that one. In your visit to Behind AotW, be sure to visit the SBPA site (linked to in the paragraph above).
Posted by dw at 11:37 PM 2 comments: