St. Inigoes, MD - It’s been 152 years since the November night when the USS Tulip, serving in the American Civil War—among other things patrolling the Potomac River in search of blockade runners—headed up the river for boiler repairs. The ship never made it to the Anacosta Navy Yard in Washington, D.C.
Just off Piney Point in St. Mary’s County and Raggedy Point in Virginia, the boiler blew Nov. 11, 1864. The ensuing explosion ripped the ship apart, claiming 49 lives in the process.
On a crisp morning in St. Inigoes Friday, Nov. 4, the U.S. Navy paid tribute to those lost in the disaster.
[from BayNet.com: read the full article here]
Posted by dw at 9:13 PM No comments: 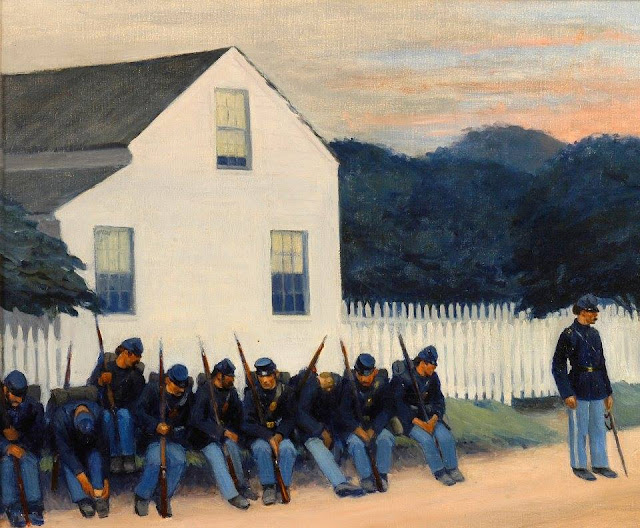 On this Veteran's Day we wanted to share Edward Hopper's painting "Dawn before Gettysburg" (1938). It belongs to the Tuscaloosa Museum of Art in Alabama, where it is shown in the Civil War Gallery.

Hopper calls up the memory of the bloodiest battle that took place in the Civil War. Fifty-one thousand men lost their lives, almost a third of the men who participated. Hopper does not create a violent bloody scene, but conveys to the viewer a great feeling of anticipation. Nine soldiers are seated on a grassy bank along a dirt road in front of a white house trimmed in blue with a white picket fence. The tenth soldier stands looking off into the distance.

There is stillness in the air as the sun begins to rise. Each man is engaged in some activity, one is tying his shoe, and another has fallen asleep.
Posted by dw at 9:11 PM No comments:

From the attics and shoeboxes of Virginia, a trove of historical gold


The opening line still hurts across the years.
“Dear Mother — I am here a prisoner of war & mortally wounded.”
John Winn Moseley was writing home from the Gettysburg battlefield on July 4, 1863. He was a 30-year-old Confederate from Alabama being cared for by his Yankee captors.
“I can live but a few hours more at farthest,” he wrote. “I was shot fifty-yards of the enemy’s line. They have been extremely kind to me.”
Moseley died the next day. His letter — on delicate blue paper, stained with what might be blood — made it to his mother in Buckingham County, Va., and the family kept it ever after. Now it has come to light in a trove of Civil War documents that the State Library of Virginia discovered in a surprisingly straightforward way: It asked state residents to bring them out of their homes.
From 2010 until last year, as Virginia observed the 150th anniversary of the Civil War, archivists traveled the state in an “Antiques Roadshow” style campaign to unearth the past. Organizers had thought the effort might produce a few hundred new items. They were a little off. It flushed out more than 33,000 pages of letters, diaries, documents and photographs that the library scanned and has made available for study online.
Read the full story here.
Posted by dw at 11:17 AM No comments: