There are too many Civil War books to keep up with (or catch up with) these days, so one has to be fairly discerning about how to fill those precious few hours available for reading (it's hard enough to keep up with all the blogs). But even though his Facebook entries evince a startlingly pronounced and deeply disconcerting [New York] Yankee bias, I'm going to take time to read Brooks Simpson's newest work from Praeger's, "Reflections on the Civil War Era" series. Reflections should always be characterized by well-informed and well-considered opinions, and I'm confident Simpson won't disappoint on that score, whether or not you concur with his observations.

P.S. I can see what the dust jacket designer was going for with the Grant image on top, and the Gettysburg map below, the Civil War in the East, of course, but you just know some reviewer is going to count coup by pointing out Grant wasn't at Gettysburg.
Posted by dw at 12:26 AM 1 comment:

I don't know how I missed this controversial story from the late 1990s. It must have gotten lost in a busy news cycle. 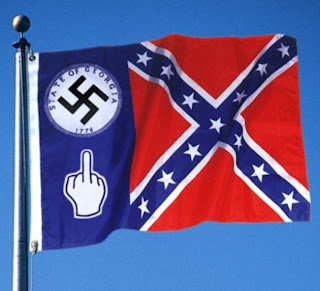 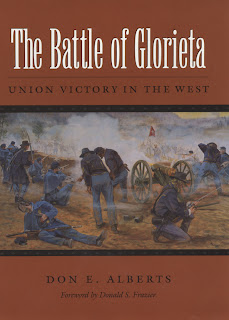 No, Ed did not mention a book on Glorieta Pass in his top five, but I'll bet you he read this one, and thought highly of it. On his tours of Glorieta and Valverde, no doubt he crossed paths with the late historian Don Alberts, who sadly passed away from Parkinson's in November of 2010. I love the New Mexico desert, and I love Don's book on Glorieta (read Don's account of the battle at the Civil War Trust website).
I started thinking about Don's book when I stumbled upon this link over at the fine "Past in the Present" blog, a Billings Gazette article that asked Ed Bearss to list his five favorite Civil War books. I was very curious to see what Ed would list, since these kinds of things are so subjective, and imagining what any one person would say after a lifetime of study is difficult. Battle Cry of Freedom and Grant's memoirs are unassailable choices. I imagine a great many people would list them as a "must" for any top five ranking. I do.
I was interested to see the Sears' book on Gettysburg—which I have not read—make the list for best book on a single battle. Now I feel like I have to read it, though before today my chances of getting around to it were less than 50-50. Still waiting on my metaphorical nightstand is Steven Woodworth's single volume Gettysburg history, Beneath a Northern Sky (about which Jeffrey Hall wrote a fairly penetrating review). 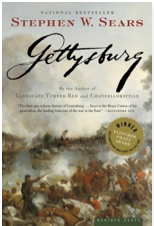 Invariably at some point when reading a book by Sears, I find myself distracted by the author's emotional reaction to one thing or another, one officer or another. Since McClellan was not at Gettysburg, perhaps the distractions of his book on that subject are more fleeting. I should say that Sears' book on Antietam, Landscape Turned Red, was one of the truly seminal books in my own Civil War reading. Powerful stuff. I might have included it in my own top five had I re-read it any time in the last 15 years. I can't really remember it that well now. His Seven Days book is a great contribution.
For personal gratification, I was hoping Bearss would name Mark Bradley's book on Bentonville, Last Stand in the Carolinas, which I assembled in Quark on my Mac in the dining room of our then Santa Clara apartment. Ed did make it known he considers Mark's tome a landmark work. I won't take issue with Ed's choice of Killer Angels, only say that it's a gripping story the first time you read it, but harder to revisit the more you learn about the Civil War. At least that was my experience.
Of course picking five "favorite" books from a list of literally thousands of titles is pretty impossible, like naming your favorite five novels of the 20 century, or favorite five movies of the last 40 years. But like Rob in Nick Hornby's brilliant novel (later movie) High Fidelity, ranking items in lists is something we are inclined to do as a way to get a handle on things. 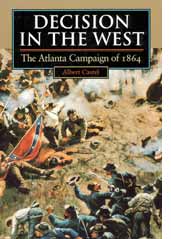 My five favorite Civil War books (not counting reference works, for which I have an inordinate fondness)? I thought you'd never ask. One has to distinguish between "favorite" and "indispensable." Edward Porter Alexander's, Fighting for the Confederacy is indispensable, and a good read, but I guess I wouldn't rank it among my top five favorites. Likewise, Charles Roland's, The American Illiad is my favorite concise single-volume history, but you can't have two single-volume histories in your top five, can you? Isn't there a rule about that? Anyway, if it's Monday, then the list must read this way:
1. Battle Cry of Freedom, by James McPherson
2. Memoirs of Ulysses S. Grant
3. Decision in the West, the Atlanta Campaign of 1864, by Albert Castel
4. A Stillness at Appomattox, by Bruce Catton
5. The Battle of Glorieta, Union Victory in the West, by Don E. Alberts
What's your top five, just off the top of your head?
Posted by dw at 1:30 AM 11 comments:

"We were about one hour into the Civil War, we all figured things were going pretty well, but naturally we wondered how much longer it would all last. Some of us thought an hour. Some thought two. We little suspected the Civil War would drag on for more than 11 hours"

The Hunley is Upright 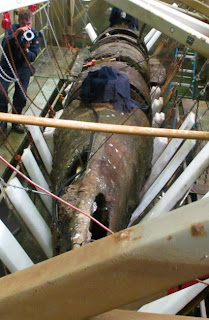 "The first submarine in history to sink an enemy warship is upright for the first time in almost 150 years, revealing a side of its hull not seen since it sank off the South Carolina coast during the Civil War." (AP) Read about it here.


Meanwhile, progress continues on preserving remnants of the U.S.S. Monitor. 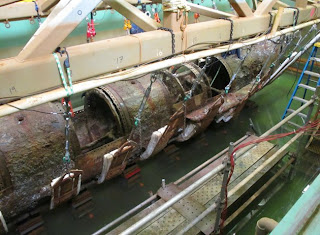 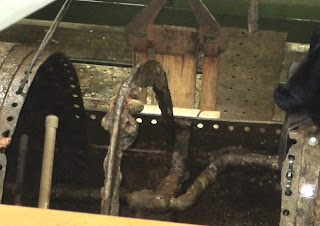