Publishing titan Ted Savas commented that Captain William Duley, the Mankato executioner, bore a resemblance to Confederate General Nathan "Shanks" Evans. I think he might be on to something. 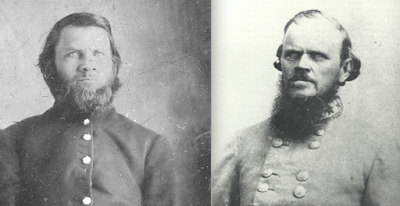 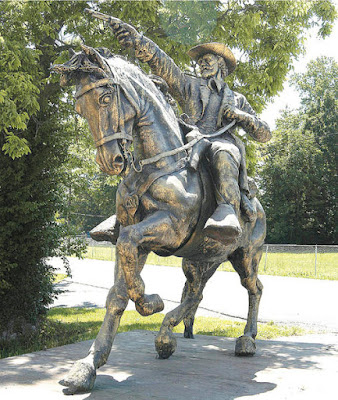 From the Lebanon Enterprise
Lebanon, Kentucky

City puts Morgan statue up for bid
Confederate Gen. John Hunt Morgan statue has been collecting dust in storage since it was created

A piece of artwork that’s never been displayed and has been the center of controversy since it was created in 1999 is for sale.

The City of Lebanon is accepting sealed bids for the Confederate Gen. John Hunt Morgan statue. During the Lebanon City Council meeting Monday, Nov. 9, Public Works Director Terry Bland asked the council to consider doing something with the statue, which is being stored and taking up space at the city service center.

The council approved taking sealed bid for the sale of the statue. “The council decided to sell the horse statue since they felt we were not going to put it up because everyone will call it the Morgan statue regardless if we rename it,” Lebanon City Administrator John Thomas wrote in an email to the Enterprise. “It is also in need of some repairs due to its riding around on the small trailer, several cracks have developed. So we’re seeking bids.”

read the full article (and for info on placing your sealed bid) here
Posted by dw at 6:55 PM No comments:

From the Minneapolis Star Tribune
by Curt Brown

Until now, historians had never seen an image of Capt. William J. Duley—the executioner on the day 38 Dakota men were hanged in Mankato after the 1862 U.S.-Dakota War. New Ulm researcher and author Elroy Ubl tracked down a descendant in Seattle who had inherited a family album of the glass-plate portraits, including her great-great grandfather’s.

Now we know what the hangman looked like at the largest mass execution in U.S. history. Just how history remembers Duley — as traumatized father, notorious executioner or out-for-himself promoter — remains a thornier question.

Three of Duley’s children—Willie (10), Belle (4) and Francis (6 months)—were killed in the conflict. His wife, Laura, was shot in the heel, witnessed at least one child’s slaying and was taken captive along with their son, Jefferson, and daughter. Emma. Some accounts said Laura was pregnant at the time and miscarried during her four months on the Dakota plains. She might have been raped.