Some photos from the Civil War Forum's visit to New Orleans in April, 2010 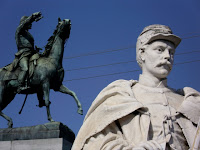 This first one is from the Army of Tennessee tomb at Metairie Cemetery. I'm convinced this soldier is the same one pictured on the original dust jacket of James Lee Burke's, In the Electric Mist with Confederate Dead. But I could be wrong. 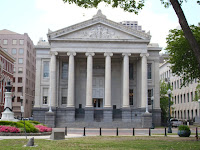 Gallier Hall, on St. Charles Avenue, was city hall in 1862 when Federal officers from the U.S. fleet climbed the steps and demanded the surrender of New Orleans. 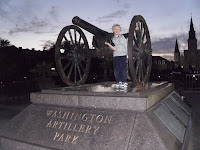 Monument to the acclaimed Washington Artillery.
And a boy who climbs on everything. 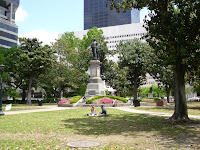 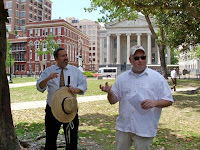 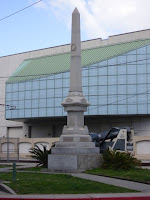 Battle of Liberty Place monument, commemorating the Reconstruction Era fight between the White League and the Metropolitan Police, in 1874. If the South lost the Civil War, this, Nystrom pointed out, was where white supremacists won the peace. 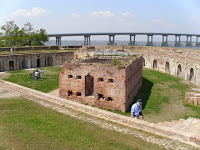 Fort Pike on Lake Ponchartrain, now a Louisiana State Park. Theres' little in the way of interpretation, but the park staff are superb. 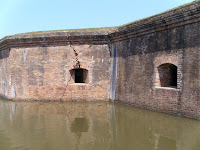 The fort was completely underwater after Katrina, though the moat seen here was part of the design. 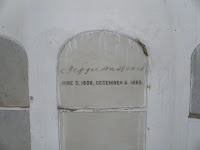 Original burial place of Jefferson Davis, Metairie Cemetery. Eighteen months after he was buried here, wife Varina had his remains moved to Hollywood Cemetery in Richmond. 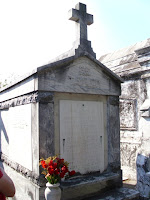 Grave of General Richard Taylor, son of president Zachary Taylor, son-in-law of Jefferson Davis, and author of one of the best reminiscences of the Civil War, Destruction and Reconstruction. 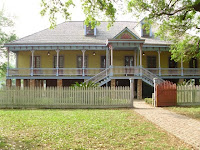 Laura plantation, for many of us, one of the highlights of the weekend. A beautiful spot, quiet and uncrowded when we were there, with a wonderful guide. A unique example of a Creole plantation. 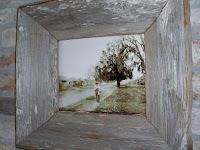 Photo of a slave on the Laura plantation. Note the line of slave cabins on either side of the image. 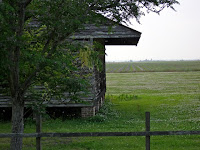 One of a few surviving slave cabins at Laura, along the Mississippi River. In the distance are sugar cane fields. 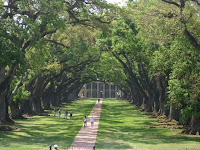 Oak Alley Plantation on the Mississippi River. The 300-year-old oaks are pretty stunning, and the architecture presents a classic image of the antebellum plantation, which also makes it one of the more touristy stops on the old river road. 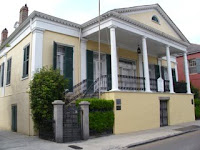 The home of Confederate General Pierre Gustave Toutant Beauregard, from 1866-1868, in the French Quarter. 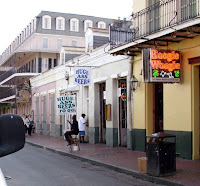 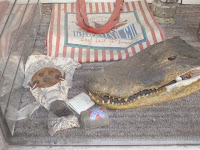 This was a long-neglected display window at a liquor store at Canal and Camp. At first I thought that was a voodoo doll holding a giant cookee, but now I think it may be some kind of Aunt Jemima representation holding a tray. The doll, the alligator head and the Confederate battleflag shot glass all combine to broadcast the message that I cannot decipher. 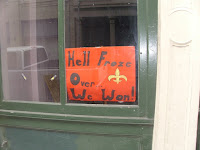 Now this is a message I can understand, and perhaps the only football-related one I saw that did not say "who dat?"