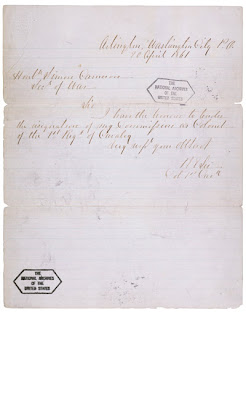 a brand new exhibit, opened at the National Archives last Friday, and by all accounts is an important and substantive presentation. At the heart of it are six original documents, either rarely seen, or never before exhibited, such as Robert E. Lee's resignation from the U.S. army (photo at left).
It's a massive exhibit requiring two visits -- Part I is up and running, and Part II will debut on November 11. At the close of the National Archives show, the combined parts will hit the road for exhibitions at The Henry Ford Museum, Dearborn Michigan (Summer 2011), The Houston Museum of Natural Science, Houston, Texas (Fall 2011 through Spring 2012), and finally at the Durham Museum, Omaha, Nebraska (Fall of 2013).
The exhibit web site is here.
Posted by dw at 11:06 AM