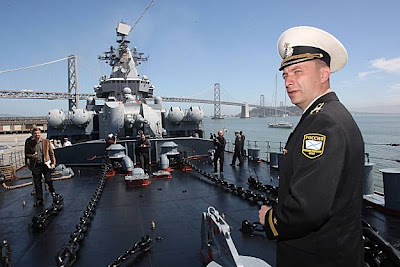 The flagship of Russia's Pacific fleet has come to town and is docked at Pier 30-32. It is the first Russian warship to visit San Francisco since 1863, when the Russian Pacific and Atlantic fleets tied up in San Francisco Bay and New York Harbor. The weaponry has been upgraded somewhat. Those earlier vessels were formidable, but this one has 16 cruise missiles with a range of 3,400 miles.

One hundred and forty-seven years ago, the Civil War raged in the East, and U.S. relations with France and Great Britain remained tenuous. The importance of Russia's support for the Union goes underreported in the literature. The bi-coastal sojourns in the U.S. freed the Russian fleets from potential blockades in their home ports, and made for a strong show of force in the event that one of the great Western European powers recognized the Confederacy.

The Russians, of course, had a long and rich history on the West Coast of North America. San Francisco's Russian Hill (North of Nob Hill, and west of Telegraph Hill), was named for a small cemetery of Cyrillic-inscribed tombstones discovered on the crest by 49ers. In 1812, moving down from Alaska, the Russian 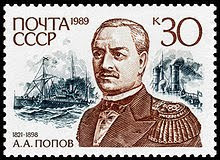 Hearty thanks go to the Russians for standing by the Union in her time of greatest crisis, and for the the sacrifice of six sailors who died fighting a conflagration during that 1863 visit. A plaque honoring those sailors was dedicated in San Francisco last week at the foot of Broadway.

The Battle of Brandy Station

Today marks the 147th anniversary of what is frequently described as the largest cavalry battle on the North American continent. It's worth paying a visit to the outstanding web resources at the Civil War Preservation Trust site, where you'll find first-rate maps, an interview with author Eric Wittenberg, an article by Bud Hall, photos, video tours, and more.
On the weekend after Labor Day, Eric will be conducting a tw0-day bus tour of Brandy Station, from Kelly's Ford to Trevilian Station. The first 12 registrants (of which there are half a dozen so far) will receive a free copy of Eric's new book on Brandy Station

. Additionally, $10 of every registration will be donated to CWPT. More information can be found here.
Posted by dw at 10:38 AM No comments:

A Stillness at Appomattox 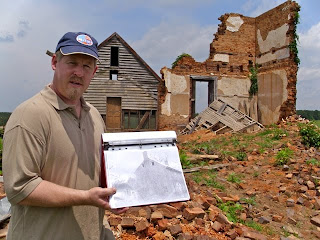 I'm back in the Golden State after a jam-packed Civil War weekend in Appomattox, and will take some time later this week to post some photos and reflections. After two days of following Patrick Schroeder around—this being my second visit to the area—I'm finally beginning to get the lay of the land. It's a difficult campaign to grasp, and pouring over maps is not quite enough.
For me, it's always been a challenging puzzle to visualize the disengagement of Lee's army from Petersburg, the rapid Federal pursuit, and the precise chronology and movement of pieces of both armies along a network of roughly parallel roads on either side of the Appomattox River. For the first time, I started to see a more complete picture of how the Army of Northern Virginia became disconnected, and how Federal cavalry closed off first one route and then another, forcing the remnants of Lee's army into a "punchbowl" with nowhere to go. Now I need to revisit some of the primary source material, and Chris Calkins's narratives, to finally achieve something approaching fluency in my understanding of the incredibly dramatic closing hours of the war in the East. Virtually all Civil War battlefields require a personal visit to make sense of the complicated and often clumsy descriptions intended to illuminate them, but some require it more than others.

You can't appreciate the swale that swallowed Longstreet's Assault until you personally make the walk to Cemetery Ridge. Once you've seen for yourself the ravines at Shiloh, you won't so casually fault Beauregard for not finishing the job on the first day. And until you grok the geography and road network on Lee's retreat from Petersburg, you cannot appreciate how close we came to losing the poetry of Catton's title, A Stillness at Appomattox, in favor of a stillness at some other place. I billed this tour as "Unseen Appomattox," and Patrick did not disappoint. We made several forays into heavily wooded areas to locate the ruins of various wartime structures, and some extant defensive works, and saw many other sites that warmed the cockles of our uber-geeky Civil War hearts.

[Photo at top: Appomattox Court House National Historic Park historian Patrick Schroeder, holding up a period photo of Longstreet's headquarters in front of the ruins of that building.]
Posted by dw at 1:51 AM 3 comments: 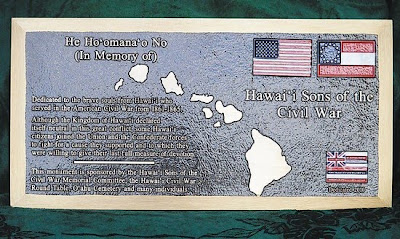 You heard me. On this Memorial Day, 2010, the Honolulu Advertiser reports that "Henry Ho'olulu Pitman, the son of a Hawaiian high chiefess, was born in Hilo, served as a young man in the Union Army during the American Civil War, and died from the effects of being held in the South's Libby Prison."

The article asserts that as many as 40 native Hawaiians served on one side or the other during the war, including 12 on the famed raider CSS Shenandoah (probably pressed into service for their sailing skills).

Mustering best Johnny Carson impression: I did not know that. 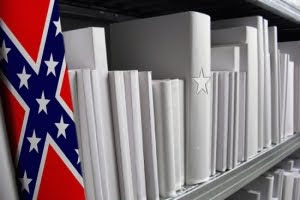