"I am heartily tired of hearing about what Lee is going to do. . ."

The Civil War Preservation Trust is proud to announce a new campaign to save 49 acres at the center of the Wilderness Battlefield. Historian Gordon Rhea says that this new tract at the famed Saunders Field is a property that "witnessed some of the Wilderness' most brutal combat."

Read all about it, see maps, and get info on The Wilderness then & now by visiting here.
Posted by dw at 12:02 PM No comments: 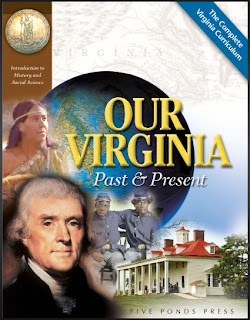 700 ambrotypes and tintypes donated to the Library of Congress 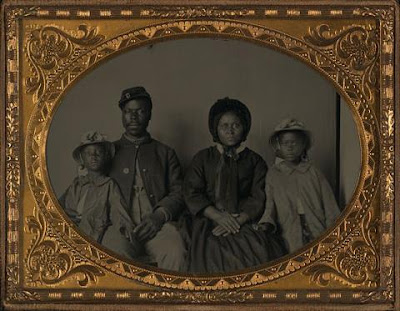 Thanks to a Virginia collector, Tom Liljenquist of McLean, we'll all soon have access to a painstakingly gathered collection of 700 Civil War ambrotypes (glass) and tintypes (metal). Nothing I've read about these images so far indicates whether copies of them might already exist in the LoC or in other major collections, such as the one at Carlisle Barracks, but there's a good chance the majority of them are previously unknown outside of private hands. Mr. Liljenquist generously donated them to the Library for the benefit of us all.

I'm editing this to mention that I just finished reading a much more detailed and interesting blog post by Rea Andrew Redd over at Civil War Librarian. Have a look-see.
Posted by dw at 2:35 AM No comments:

The Mississippi Delta was shining like a National guitar. . . 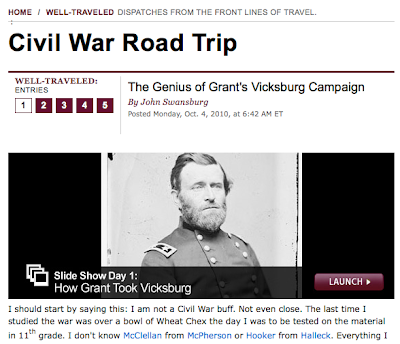 I love reading dispatches from the road from people eager to learn something new and fresh about our nation's history. Thanks to Ethan Refuse over at Civil Warriors for highlighting this series. I read Slate pretty regularly, but somehow skipped over these travel entries.

The author, John Swansburg, is a non-Civil War buff who offers the disclaimer, "The last time I studied the war was over a bowl of Wheat Chex the day I was to be tested on the material in 11th grade." He and three friends embarked on a 10-day road trip from New Orleans to New York, taking in as many Civil War points of interest as they can fit in. The narrative is breezy, and chock full of hyperlinks for your surfing pleasure.

A round of golf, followed by simulated horror & carnage, topped off by a catered dinner. See you in Paradise! 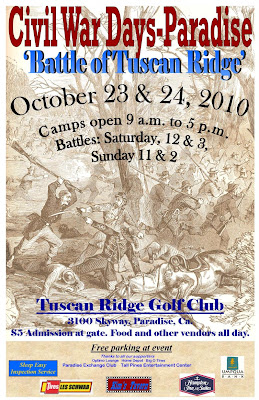 Long-time readers of this blog—both of you—know of my somewhat mixed feelings about the kind of "living history" that endeavors to re-enact terrible scenes of combat, as if dressing up and taking fake "hits" in a field somehow presents the actor or onlookers with a special insight into the unspeakable horror and shock of bodies being torn asunder in a nightmarish hail of shrapnel and lead, destroying lives and wrecking families in the moment and for generations to come.
There is definitely something to be said for seeing authentic uniforms and weaponry, and being able to visualize army-sized masses of men arrayed against each other, but Hollywood, in movies like Glory and Cold Mountain, does a better job—both in scale, and in special effects. I'm not going to (directly) question a re-enactor's stated motivations about honoring the fighting man of the Civil War, but another time-worn rationalization—doing it to teach the children—frequently falls flat when you read a re-enactor's comments in a newspaper article, explaining to rapt second graders that slavery was incidental to the Civil War.

There's the rub. Many re-enactors—including many I have known—are arguably experts on the Civil War era, but there's no quality control. Any nitwit with a wool uniform and a kepi can get invited to address a group of school children. He must know a lot about the Civil War, right? He's got a damn uniform. See my earlier diatribe on this subject, "Claude of the Turbervilles."

In part, I feel like there's something fundamentally disrespectful to all the soldiers who couldn't get up and walk away, or who were maimed and traumatized for life. Ultimately, of course, it's none of my business why people re-enact as a hobby. For me, it's enough to visit the battlefields, and read books. Certainly I have my own peculiar interests and hobbies which others would deem a waste of time and money. 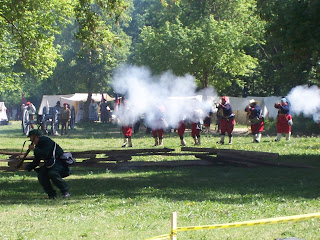 My teenage son often goes "Airsofting" with a bunch of like-minded enthusiasts in the Santa Cruz Mountains. It's a more sophisticated version of paint-balling (at least in terms of the authenticity of the weapons), in which groups of weekend warriors in camouflage square off over a large field in games of Capture the Flag, and whatnot. But they don't try to dress up the experience with talk of living history, or claim to be trying to understand what a soldier endures. They're playing army, getting exercise, testing their stealthiness, and having fun.

My friends and I played our own version of it in the bottoms of the Boyer River in Western Iowa, but we used BB guns, shop goggles, and trench coats to cover as much skin as possible (I can say this publicly now that my mother is no longer alive). We didn't have any grandiose notions about why were were doing it.

Still, as I said, I'm inclined to give many Civil War re-enactors the benefit of the doubt (in a way that I don't extend to Nazi re-enactors in Ohio). And I do admire their dedication, and willingness to go whole hog. I think the folks up in Paradise, California have the right idea. They're funding living history education with the proceeds of some golf tournaments, and staging reenactments on the driving range. Pancakes in the morning, and catered dinner at night. That's my kind of war.

One little quibble, though. Take a closer look at those Zouves in the promotional photo above. I've zoomed in on them here. 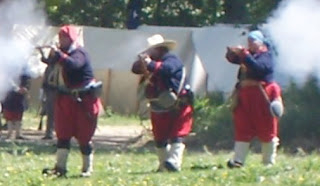 They didn't have any 400-pound Zouves in the Union army. I'm sure the hobby, of necessity, is open to all comers, but I have trouble suspending my disbelief when I see soldiers who look like NFL offensive linemen. At what point does the painfully exacting authenticity of uniform buttons and weaponry take a backseat to overall appearance? "You see my button is an exact replica, soaked in urine to get the proper sheen, but please disregard the fact that you could make a weather balloon from the expanse of my pants."

This brings to mind the Turner movie, "Gettysburg" when, in the opening minutes, a spy encounters Confederate pickets and is challenged by one ragged Confederate private who just happens to be morbidly obese. I'm not saying the guy shouldn't be able to enjoy his hobby, it's all make-believe anyway. I myself am dangerously overweight. But what happened to the process of "casting" for a major motion picture?

This last digression brings to mind a compelling bit of commentary on how Civil War reenactments are still not handicap accessible for differently abled soldiers. If not now, when?
Posted by dw at 3:36 AM No comments: