When I think baseball, I think Custer bobblehead 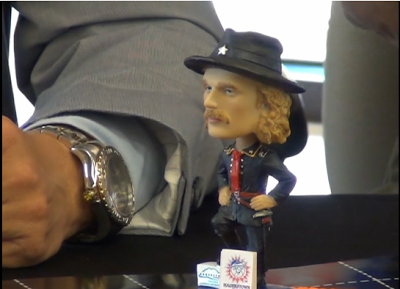 The first 1,000 fans through the turnstile at tonight's Hagerstown, Maryland Suns game (Class A farm team for the Washington Nationals), get to take home a George Custer bobblehead. It seems a peculiar choice, but not to Hagerstown Visitor's Bureau president Thomas Riford, who calls Custer a "folk hero" in those parts. The promotion is not being well received by the staff and readers of Indian Country Today. 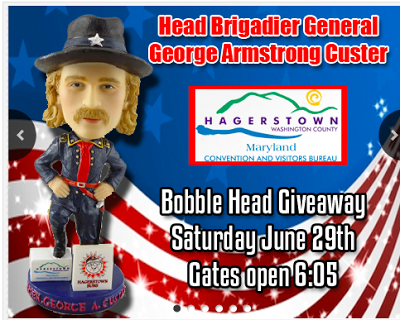 Prison Times, volume one, number one

From Slate.com's, "The Vault," comes this rare gem:

"Confederate prisoners of war confined at Fort Delaware produced this newspaper by hand in 1865. The New York Historical Society holds one of four surviving copies, each of which was likely passed around and read by multiple prisoners. The paper numbers four pages in total." 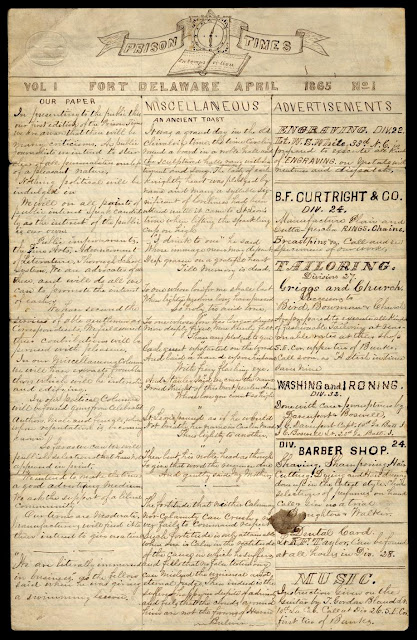 Pilgrimage to the Greasy Grass 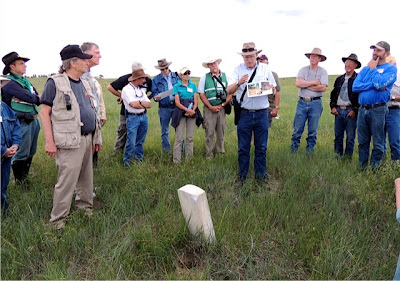 Friday night, with the Friends of the Little Bighorn Battlefield, we had the amazing opportunity to get off the trails and walk cross-country with Dr. Douglas Scott, one of the principal archaeologists who worked the field beginning in 1984 and on and off again until about 2011. We traversed much of Greasy Grass Ridge, followed Calhoun Coulee for a good distance, and then climbed down into Deep Ravine. Back at the hotel, Anne found three ticks on her person, but I lucked out in that department. In the photo above, Scott is discussing the remains discovered at marker 128—named "Trooper Mike" because he was in section M of the archeological grid. His was the most complete skeleton found on this part of the field, and he died a very violent death. 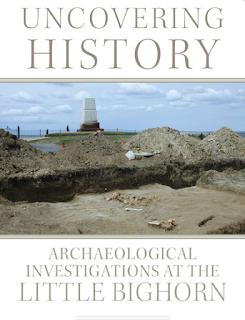 Two days before I had just finished reading Scott's newest book, a more reader-friendly summary of previous dig reports (published by the University of Oklahoma Press and funded by the Friends), so this expedition was especially fascinating.

The weather during this year's visit was dramatically different than it was in June of 2012. Then it was broiling hot, and the landscape brown (similar to what I imagine it was in June of 1876). This weekend, temperatures were pleasant, even a little cold, with occasional showers and lush green the world over.

Whatever the weather, the Little Bighorn is one of the most beautiful, haunting, and somber battlegrounds in America. I'll post a 2013 photo gallery shortly. 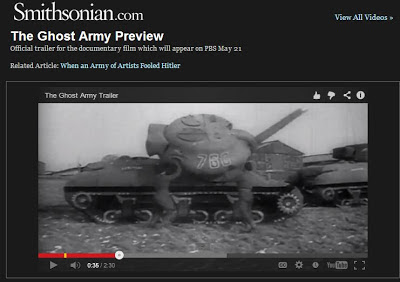 Shortly after the D-Day invasion on June 6, 1944, two Frenchmen on bicycles managed to cross the perimeter of the United States Army’s 23rd Headquarters Special Troops and what they saw astounded them. Four American soldiers had picked up a 40-ton Sherman tank and were turning it in place. Soldier Arthur Shilstone says, “They looked at me, and they were looking for answers, and I finally said: ‘The Americans are very strong.’”

The passage above is the opening paragraph of an interesting article at Smithsonian.com, discussing the recently broadcast documentary, The Ghost Army. You can read the article here: When an Army of Artists Fooled Hitler.

The show aired on May 21, and DVDs are for sale, but it doesn't appear to be available for streaming yet. Here's the documentary website.


Of course the first thing I thought of  upon reading this were the so-called "Quaker Guns" of the Civil War era, though the WWII subterfuge is exponentially more elaborate. Civil War Quaker Guns were logs painted black to resemble artillery pieces, intended to fool the enemy into thinking fortifications were still occupied. Most famous, perhaps, was Joe Johnston's use of Quaker Guns at Centreville in March, 1862, to help mask his army's movement toward the Rappahannock River. The use of Quaker Guns in this country predates the Civil War, however. Lieutenant Colonel William Washington, George Washington's 2nd cousin once removed, used the trick to good effect against Loyalists in South Carolina in 1780.

"Ten massive guns from Fort Moultrie on Sullivans Island, which is part of the Fort Sumter National Monument, were recently conserved as part of an ongoing program to protect the historic pieces from the salty, humid air. The guns were cast in foundries both in the North and South a century and a half ago.

The last of the guns, a 7-ton Union rifled Parrott gun suspended in a yellow sling held by a crane, was slowly jockeyed into place onto a new concrete base last week. It completes what the fort refers to as Cannon Row, where seven of the heavy guns are lined up next to each other."