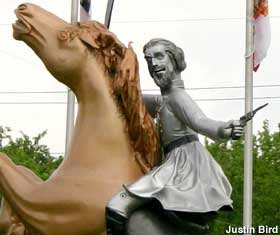 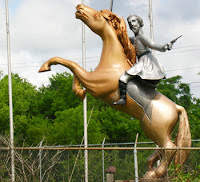 When we used to live in Huntsville, AL, we would drive through Nashville a lot---I cringed every time we went past that monstrosity!

You should put up a warning not to look at the pictures on your blog while eating.

Bonus tacky points for the statue being fiberglass. Metal is sooooo twentieth century.

I described it as looking like a gigantic action figure, David. It is abundantly hideous.

Maybe Forrest was riding a clydesdale. No, seriously, that is one ugly statue. To see an excellent statue of Forrest you need to visit his grave site in Memphis.

Jack used to be my family and business lawyer back in the 70s. He was a very nice man. He lived on a huge estate that used to be a country club.
His paintings were beautiful. I still have some of his drawings.
Lovely work.
Are you sure this is his? I've only seen his paintings, sketches, and small sculptures.

I have seen the Forrest sculpture attributed to him in various articles, as well as in his obituary: http://tinyurl.com/7ko6jpd