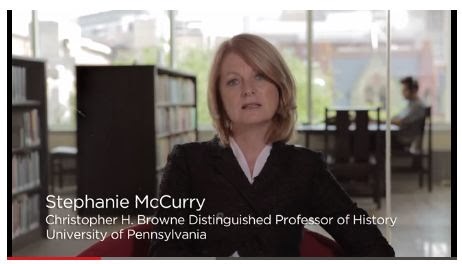 
In the world of the Internet, slavery and the American Civil War are explosive topics of debate, so Stephanie McCurry is preparing to be globally fact-checked by those with a passion for the subject matter. The University of Pennsylvania history professor and scholar will teach a 10-week, massive open online course, or MOOC, called “History of the Slave South.” It starts January 20.

So far, more than 10,000 people from around the world have signed up for the free, online course.

McCurry, a specialist in 19th century American history, with a focus on the South and the Civil War era and the history of women and gender, is the author of numerous articles and review essays as well as two books, including Confederate Reckoning: Power and Politics in the Civil War South.

Born in Belfast, Northern Ireland, she attended college in Canada before moving to the United States for graduate school. She says that her version of Civil War history is not a Southern history course offered by a Southerner but rather a course taught by an outsider.

“I’ve always thought that’s why my version of it was different and in some ways worth listening to,” she says. “It’s a gripping story in the making of the modern world, how slavery becomes so tied up in the generation of this enormous wealth by the 18th and 19th centuries, but is such a different way of producing wealth than we associate with modernity.”

For people who are not American and who don’t have direct national or ancestral connections to the South, McCurry’s “History of the Slave South” course will articulate what the stakes of slavery were in America.

She says that the course is a thematically concentrated version of what she teaches at Penn. Each week, students will view two online video lectures embedded with quiz questions. There will be weekly discussion questions. Documents and primary sources will be read, with new assignments given every two weeks.

McCurry says she believes that the time is right for a global online course on the slave South given the renewed dialogue spurred by the release of two major motion pictures. Last year’s “12 Years a Slave” and the 2012 film “Django Unchained” explored the brutality and horrors of slavery from the point of view of the enslaved.

McCurry recalls sitting in a theater in the Manayunk section of Philadelphia watching “12 Years a Slave” with a mixed, largely African-American audience. So powerful was the film that she felt silenced, needing to listen, not talk.

She wonders if people can talk about America’s slave history now because “we’ve hit this moment where people feel less directly implicated because they weren’t part of segregation, for example.”

At Penn, McCurry teaches a wide variety of undergraduate and graduate courses in American, Southern and women's history and on the comparative history of slavery and emancipation.

A group of students enrolled in the online course have started a Facebook page and a SlaveSouth MOOCTwitter account @SlaveSouthMOOC. Course registration is available by clicking the Learn for Free banner at https://www.coursera.org/course/slavesouth.