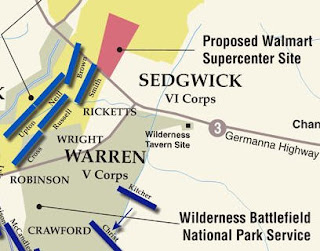 In an unexpected development on the day that a trial was scheduled to begin in the case, Walmart announced that it has abandoned plans to pursue a special use permit previously awarded to the retail giant for construction of a supercenter on the Wilderness Battlefield.
“We are pleased with Walmart’s decision to abandon plans to build a supercenter on the Wilderness battlefield,” remarked James Lighthizer, president of the Civil War Trust.  “We have long believed that Walmart would ultimately recognize that it is in the best interests of all concerned to move their intended store away from the battlefield.  We applaud Walmart officials for putting the interests of historic preservation first.  Sam Walton would be proud of this decision.”
Posted by dw at 9:04 PM 1 comment: 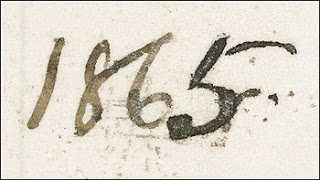 . . .Winn was one of two known people left in the United States whose parents both were almost certainly born into slavery because documents show they were born before the end of the Civil War, though her great-niece Mary C. Hollins says Winn never acknowledged that.

"I don't know much about that," Hollins recalled Winn saying when asked about her parents' early years. 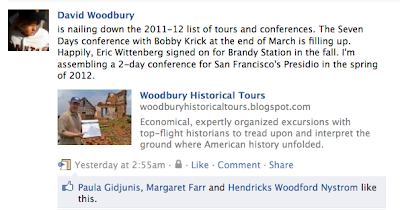 This song by Steve Earle is my favorite Civil War-themed tune, of which he's written a few. I love that he takes the perspective of a southern soldier in the Trans-Mississippi, not really knowing what he's gotten himself into. And I like the references to Wilson's Creek and the Boston Mountains, a part of the country for which I have a great fondness, and a battlefield—Pea Ridge in particular—that is among my favorites to visit. I also appreciate that Earle chooses not to glorify the war in some cliched manner, or to present a sentimental ditty about the rightness of one side's cause.
As long as the link works, you can hear the original Steve Earle version here. Otherwise, you may need to listen to one of many covers on YouTube. Better yet, you can buy it on iTunes for a buck.
We signed up in San Antone my brother Paul and me
To fight with Ben McCulloch and the Texas infantry
Well the poster said we'd get a uniform and seven bucks a week
The best rations in the army and a rifle we could keep
When I first laid eyes on the general I knew he was a fightin' man
He was every inch a soldier every word was his command
Well his eyes were cold as the lead and steel forged into tools of war
He took the lives of many and the souls of many more
Well they marched us to Missouri and we hardly stopped for rest
Then he made this speech and said we're comin' to the test
Well we've got to take Saint Louie boys before the yankees do
If we control the Mississippi then the Federals are through
Well they told us that our enemy would all be dressed in blue
They forgot about the winter's cold and the cursed fever too
My brother died at Wilson's creek and Lord I seen him fall
We fell back to the Boston Mountains in the North of Arkansas
CHORUS
Goddamn you Ben McCulloch
I hate you more than any other man alive
And when you die you'll be a foot soldier just like me
In the devil's infantry
And on the way to Fayetteville we cursed McCulloch`s name
And mourned the dead that we'd left behind and we was carrying the lame
I killed a boy the other night who'd never even shaved
I don't even know what I'm fightin' for I ain't never owned a slave
So I snuck out of camp and then I heard the news next night
The Yankees won the battle and McCulloch lost his life 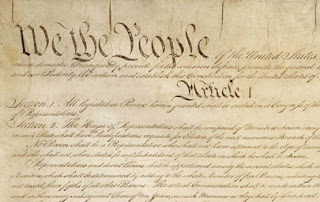 From "Read it and Weep, How the Tea Party's fetish for the Constitution as written may get it into trouble,"by Dahlia Lithwick. Slate. January 4, 2011. Read the entire essay here.
Posted by dw at 10:14 PM 5 comments: