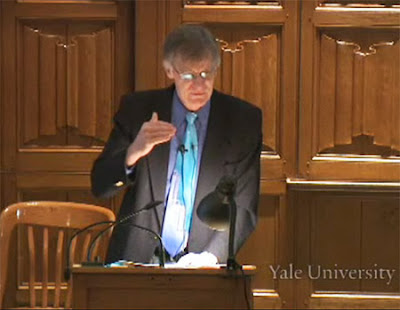 I just became aware of this essay by Professor David Blight in the online version of the Fredericksburg, Virginia Free Lance-Star.

It appears to be from a series entitled, "The Myths of Gray: What Gives the Confederacy its Staying Power?" Blight's installment is in response to Virginia Governor McDonnell's ill-considered decision to resurrect Confederate History Month.

Blight is as good as it gets when it comes to the systematic and thorough shredding of Lost Cause mythology. I like that he gets right to the core of the matter by pointing out that we don't have to take some modern-day liberal academic's word for what the war was about, we need only listen to the words of the secessionists themselves:

"The best way to understand why secession and war came in 1860-61 is to look at what white Southerners themselves said they were doing. How did the leaders of secession explain the origins of the war?"

This is a point I always try to make to people who have settled upon a notion of secession involving mysterious state rights that are somehow unrelated to slavery. The architects of secession, the Confederate leadership itself, made no bones about it. They were unabashed in stating the reasons for secession. It was only after the war that it became uncomfortable to blame unspeakable carnage and suffering on such an ignoble cause. How could any vanquished people heal or reconcile staggering losses in the wake of a rash war to perpetuate slavery? No, it had to be prettied up. Thus, a war for the independence to keep men enslaved was transformed into a war for "liberty" from tyranny.

The essay series title asks how such misguided notions about the war endure for so long. It's no mystery, really. Even in today's Age of Information we hear of sizable percentages of the population who believe—against all evidence—that President Obama is a Muslim born in Kenya. Lost Cause mythology endures because the purveyors of it—here is one blogger's reply to Blight—will not read the widely available primary source material that destroys their fantasy. Nor do they read the best scholarship available on the topic, things like The Apostles of Disunion, which unequivocally spells out the motivations behind secession. They "pass down" family history, sanitized for your protection.
Instead of wasting time trying to rewrite history, and feeding misinformation to their children, the Moonlight & Magnolias crowd should consider constructing an honest rationale for honoring their ancestors. You can honor the man without honoring the cause, and without trying them in the court of modern opinion. Those brave men don't need your feeble excuses for their behavior. They fought for what they believed, or they fought because they were compelled to for other reasons. They don't need you to cover for them. Like Mosby said, "a soldier fights for his country, the South was my country."
Do the descendants of Henry the VIII try to rationalize his bloody record at the wedding altar? Do Andrew Jackson's descendants create elaborate alternate histories about tears of joy on the Trail of Tears? "They weren't crying, son, they were happy to get out of Georgia." A great many Americans, myself included, have ancestors who killed Indians. Probably indiscriminately. Probably with relish. We don't honor them because of the prevailing attitude toward Native Americans in centuries past. We honor them because they are our ancestors, and because they were brave pioneers in a new world—even the scoundrels among them.
It's just history.

[P.S. my wife has just mentioned that Henry VIII may not have any living descendants]
Posted by dw at 10:25 PM

Henry VIII had three legitimate children (Mary, Elizabeth, Edward), all of whom died w/o issue. However, he had a boatload of bastards, whose descendants may be able to establish the connection.

As to the merits of your post, I of course liked it! Allow me to mention the best online source for many of the primary secession documents:

The publisher is someone I know ;-)

And Richard Williams is a putz ;-)

Thanks for this. Blight's entire course on the Civil War era is available here, for streaming or download:

Jim: thanks for the link -- that site has been an invaluable resource for me for many years now. Well done!

Andy: thanks for that. I love all this digital access -- iTunesU and such -- but also find it overwhelming (I also have the DVD's of Gallagher's entire course on the Civil War, a gift from my niece). I want to find time for it all, and still read fiction, raise my family, and watch every minute of every Giants and 49ers game.

Life is short, that's for sure.

Fancy the content I have seen so far and I am your regular reader of your blog.

I am pleased to see my blog in your blog list.

Hope to see a positive reply.

Thanks for visiting my blog as well !

Waiting for your reply friend !!!!!

Hi There -- my name's Sean, I'm one of the webmasters at A People's Contest, a new CW blog from the Richards Civil War Era Center at Penn State. I, too, have been following Blight's recent (and very public) sparrings with Lost Causers. But I thought your commentary was a nice addition -- I thought your final paragraph was particularly insightful. Comparing the actions of CSA soldiers with Indian-'fighters' seems novel, appropriate, and instructive.

Alfred, thanks for the kind note. I'll take a look at your blog. Thus far, I have been pretty careful to restrict my blogroll to Civil War-specific sites. I hope you can appreciate that -- just trying to stay consistent.

Thanks for the note -- your blog looks great. I'm a fan of the Civil War Era Center.

Glad you took my point, that we can still find a way to honor or at least acknowledge our ancestors without rationalizing or excusing behavior or beliefs that today we find abhorrent. Rewriting history is not the answer.