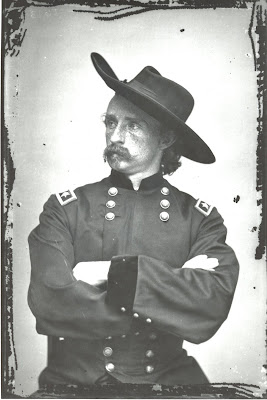 NEWSPAPERS RACE TO REPORT THE SHOCKING STORY
Before Wolf Blitzer was interviewing holograms, before news apps for the iPhone, before Twitter, there were just newspapers.

George Custer, "the boy general" of the Civil War, was 36-years-old when he overreached on June 25, 1876, on the eve of the nation's centennial celebrations. Two newspapers broke the story, the Bismark (Dakota Territory) Tribune, and the Helena (Montana Territory) Herald.

Marcus Kellogg, a correspondent with the Tribune, was "embedded" with the Seventh Cavalry, and killed along with Custer's men. The last dispatch he sent, dated June 21, included this update, "We leave the Rosebud tomorrow. . .and by the time this reaches you we will have met and fought the red devils, with what result remains to be seen." 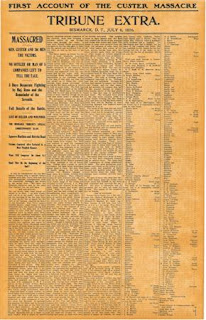 The famous headline in the special edition of the Tribune on July 6 reported: "Massacred: Gen. Custer and 261 Men the Victims." According to the paper, "The body of Kellogg alone remained unstripped of its clothing, and was not mutilated" (other sources describe his corpse as scalped, and missing an ear). This 2,500-word account, incorporating Kellogg's notes, was the first fully-detailed reportage.
Consider that. Ten days passed before the premier newspapers in the East were reporting the story. By contrast, events during the Civil War, from far-flung battlefields, could be telegraphed nearly instantly. The first trans-continental telegram was sent from Sacramento to Washington in 1861, 15 years before Custer's last stand. But reporting from Montana was another "story" altogether. It was a journalistic black hole.

[at left: intrepid reporter and casualty of war, Marcus Kellogg]
Five days after the battle, the steamboat Far West, loaded up with wounded, Kellogg's notes, and Myles Keogh's horse "Commanche" -- sole survivor from Custer's contingent -- began the 700-mile river journey to Fort Lincoln at Bismark, North Dakota. The Far West arrived with news of the battle on July 5th, and Tribune editor Clement Lounsberry went to work on the story. According to the State Historical Society of North Dakota, "there was only a single telegraph line between Bismark and St. Paul at that time, and the only way to keep the line open was to keep transmitting. So, whenever Lounsberry fell behind, he had the telegraph operator transmit lines of scripture from his pocket Bible. It reportedly took Lounsberry and the operators 24 hours to finish, and the total bill for the transmission came to more than $3,000. The following day, the New York Herald ran a 14-column story about Custer's demise."
Posted by dw at 1:23 AM