When Kingcome Came, Winder Took a Shot at Him, part one 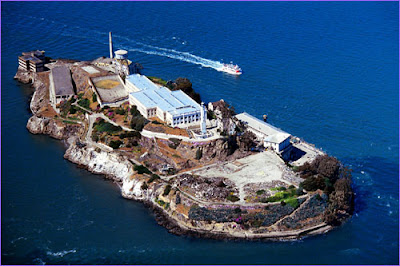 Reading the Official Records of the War of the Rebellion, even at random, never fails to produce something of interest. Continuing the last entry's focus on Left Coast (Civil War-era) fortifications, I want to put up at least two short pieces on San Francisco's Bay's most famous island, if not its most spectacular (saving Angel Island for still another entry). You know the one—what the Spanish named Isla de Alcatraces, or Pelican Island. Later just called Alcatraz. Or for you criminal types, The Rock.

Alcatraz was the centerpiece of harbor defenses, able to reach anything coming or going with her massive guns. For most of the Civil War period, the installation was commanded by William A. Winder, the son of a Confederate general. Sons of rebellious fathers are always looked upon with suspicion, never more so than during wartime. Winder served his country with honor, but nevertheless brought unwanted attention down upon his far-flung post.

Here is some correspondence from the Official Records about the time the Commander-in-Chief of Britain's Pacific Fleet came calling, and, as he saw it, was rudely fired 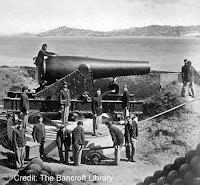 upon by Captain Winder. Tomorrow, or tonight, look for another Alcatraz entry on how Captain Winder's loyalty subsequently came under question all the way back in Washington.

To summarize the following (click on individual telegrams for a slightly more readable view), Rear-Admiral Kingcome, making a courtesy visit, moved into San Francisco Bay with his flagship Sutlej. The day was so calm, his colors could not be discerned, and Winder fired a shot to bring to the unidentified ship. Kingcome took umbrage and wrote Winder's boss, George Wright. Winder gave his side of the story, but Kingcome wasn't entirely satisfied. A couple years later, the son of the Confederate general would have bigger problems (next entry). 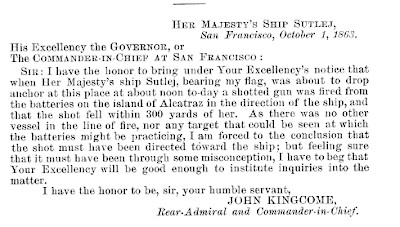 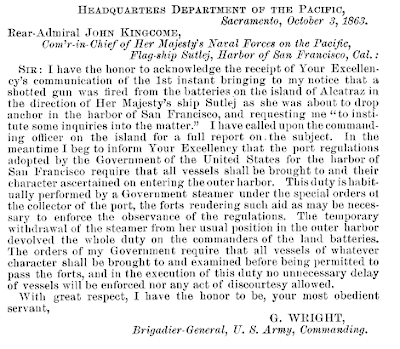 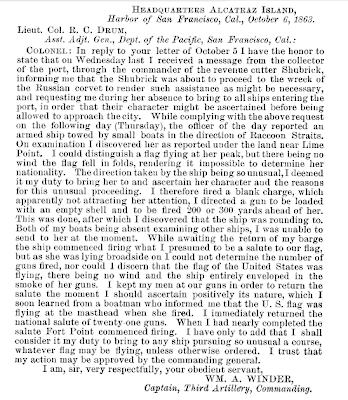 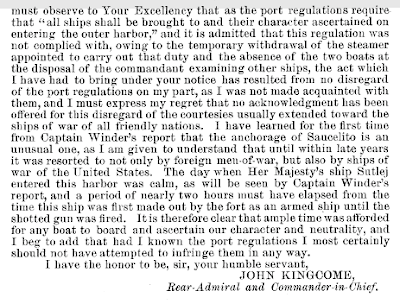 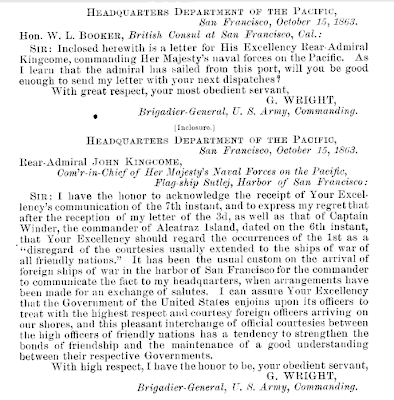 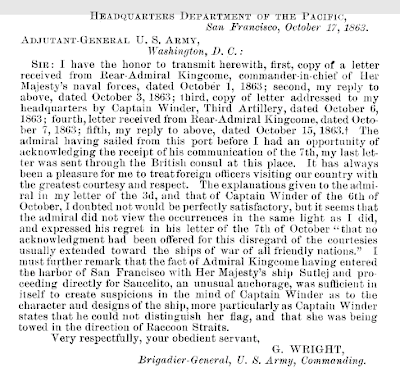 Forgive my off-topicness, but your last two posts are just too coincidental to this cinephile. I just watched the wonderful Lee Marvin movie "Point Blank" last night. The movie was bookended by helicopter drops inside first Alcatraz and then down into Ft.Point. The latter looked to be a rather dangerous enterprise, but perhaps the parade ground in there is a bit larger than it appeared.

Very interesting. Alcatraz shows up in lots of films, but not too many give you views inside Ft. Point (there's a scene in Hitchcock's "Vertigo" that shows a little of the exterior). The parade ground is pretty small -- maybe twice as big as what you can see in this photo: http://tinyurl.com/ysjdyr

Being a Civil War buff from California, I am always interested in incidents like this. Thanks for posting and I look forward to the next chapter on Capt Winder.

Thanks for the note. As you know, I'm always interested in the Golden State connections.

I'm a Civil War historian living in California who is writing a book about William A. Winder. Three years of intensive research has produced a compelling story. My work continues as I write the book.

I'd love to hear more about your book. I have roughed out a magazine-length piece on Winder to pitch to Civil War magazines, focusing on the delicious irony of his father being a Confederate officer.

Am deep in the writing now and have covered Winder's Civil War career as well as his pre-war and post-war life. A good part pf my materials are original research. It is a hard slog through archives, special collections and unwilling descendants. I'm excerpting an article as well from my 400 page behemouth.