About one year ago, in my October 30, 2006 blog entry I made passing mention of some Civil War-related "Roadside Attractions"

inlcuding a reenactment of what is claimed to be the Civil War's first amputation in Philippi, West Virginia (scroll down at that link to read about the unfortunate surgery). Philippi also boasts the Mummies of the Insane exhibit, which I'm guessing draws more visitors.

There's much more to the amputation, story, however. I chanced upon one of many news reports about American service personnel in Iraq who have been fitted with the latest in prosthetic devices. I don't recall where I read it now, but the article made mention of the Civil War amputation in Philippi, which caused me to dig a little deeper. Turns out that first patient, James Edward Hanger—a Confederate cavalryman wounded in the Battle of Philippi—later designed his own artificial leg [editor's note: see the comment below from Steve M., who says that Hanger did not enlist on either side, but wanted to join Union forces initially). Perhaps this story is more widely known than I realized, but it was the first I'd read of Mr. Hanger (pictured at top) in any detail. 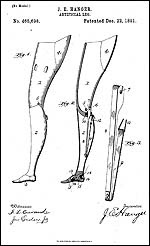 According to a company history of the Hanger Orthopedic Group, young Hanger "designed an artificial leg with the first hinged knee and hinged foot, forming it out of whittled barrel staves, rubber, wood, and metal components (the illustration at right is from Hanger's patent). According to a history of prosthetics from Northwestern University Medical School, Hanger 'replaced the catgut tendons of the American leg [an earlier prostheses named in 1856] with rubber bumpers to control dorsiflexion and plantarflexion and he used plug fit wood socket.'"

Eventually, Hanger set up shop in Richmond producing limbs for other Civil War amputees. The company he started, and that still bears his name, has since supplied advanced prostheses to amputees of every American military conflict. Today, the company has over 3,500 employees and a presence in 45 states (here's a fascinating short history of "Orthopedics at War," by Danielle Cohen; the Hanger company timeline is at the company website, and also here).

Hanger is not the only company that dates back in some form to the American Civil War. And the Hanger Limb was not the only innovative advance to spring from those years of slaughter, but I'd wager there are a lot more items on the killing and maiming side of that particular balance sheet. Take a moment this evening to raise your glass to James Edward Hanger, 1843-1919, considered by some to be the father of modern prosthetics.

Great post David. Last year in my Civil War course I had a student named Jane Hanger. And yes, she is a direct descendent. This was a research class that utilized the Valley of the Shadow, which contains a great deal of primary documents from the Hanger family. This student was absolutely fasinated by her family history and wrote a first-rate essay.

That's interesting. The Valley of the Shadow is a great project -- all the more so if you have familial connections like that. I imagine it was very gratifying for you to see your student so engaged.

Hanger actually wanted to enlist in the Union army and never actually enlisted in either. He made the mistake of camping in his hometown with a supply train that was passing through. He awoke the next morning to the sound of gunfire as the train was attacked by Union cavalry. Before he could saddle and mount his horse to leave the area, he was hit in the leg by a cannonball. The Union troopers found him a short time later, and their surgeon amputated his right leg above the knee. There is a rock in the middle of Churchville now that supposedly marks the spot where he was hit.

Ironically, he was the war's first military amputee; but he was not enlisted in either army. His family and friends were amazed when, only three months later, he emerged from his room, walking on the first hinged artificial leg, which he had designed and made while recuperating.

Thanks for the great info Steve. It really is an incredible story. Next time I pass through Churchville to see Bill, I'll seek out the marker.

Excellent post David! You can see the original Hanger patents by using "Google patents" and seraching on his name. Obviously they don't tell the whole story. If you look in wartime issues of *Scientific American* magazine (one of my favorite pasttime...no, really, it is) you'll see some great stories about artificial limb invention. Speaking of companies still in business today that have a Civil War connection, that is the focus of my forthcoming book, *Lincoln's Labels*.

Keep up the super work.

Thanks for the info. I had no idea "Scientific American" has been around that long. Those old issues must be fascinating.

I like the sound of your new book. I trust you'll keep us apprised of the progress on your blog.