Nearly Fired and Never Knew It 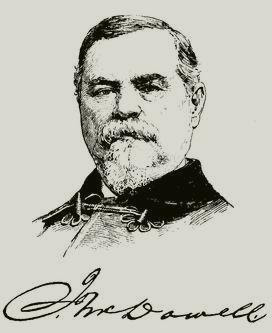 Readers of the last blog entry here may have noted that the controversy over the Alacatraz photographs really took off in early August of 1864, and that by August 5th, Department of the Pacific commander Irvin McDowell was assuring the War Department that the situation was under control (the prints and negatives seized, and the customers' names obtained). In subsequent correspondence, he was compelled to defend the honor of Capt. Winder, whose loyalty had been called into question.

Little did McDowell know, mid-August of that year also brought an informal performance review of his own position, though not for issues related to loyalty. McDowell's record in Virginia in the early years of the war was indelibly stamped with the defeat at First Bull Run, one of many connected topics intriguingly explored at fellow blogger Harry Smeltzer's Bull Runnings site.

Continuing my browsing of volume 50, part II of the Official Records of the War of the Rebellion, I came across this missive from U.S. Grant down at City Point—bogged down as he was with Robert E. Lee at Petersburg—to Secretary of War Stanton (click on the image for a slightly better view): 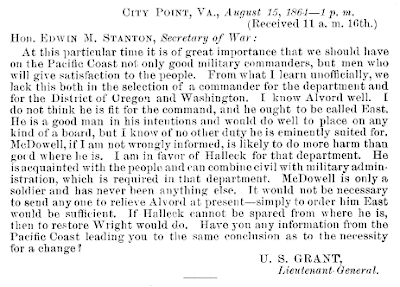 Ouch. "Unofficially," Grant says, McDowell is a disaster waiting to happen. He is not a good military commander, nor is he suited to deal with civilian authorities. He will do more harm than good. I'm struck by the seemingly casual tone of Grant's recommendation that McDowell be summarily dismissed or demoted from department command. The Secretary of War, to his credit, replies with a solid defense of General McDowell. 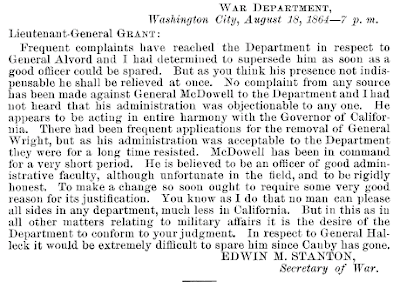 Nicely done. Stanton lays it all out: 1) there have been no complaints about him (unlike his predecessor), 2) he works well with the governor, 3) he's a good administrator, and 4) he's scrupulously honest. Yet he defers to Grant on the matter.

At last, to Grant's credit, he backs off the recommendation, reiterating that his poor impressions were based on unofficial sources— indeed, based only on something he'd heard [from one or more McDowell detractors]. Good thing, too. From all I can learn, McDowell was an able department head, was a well liked and effective administrator, and the civilian authorities Grant was concerned about were well pleased with his service. His post-war army career took him around the country, but he returned to the West Coast to command the Division of the Pacific before his retirement in 1882. He is regarded highly in San Francisco, where his service as a park commissioner was instrumental in the development of Golden Gate Park, one of the nation's great urban green spaces (photo below: Google Maps).

David,
Great post. It is interesting to see the parallels with Grant's own early CW career -- a powerful superior's casual, unsubstantiated attempt at wrecking or thwarting a career. Grant is doing just the thing to McDowell that others attempted against Grant, undoubtedly leading to much unnecessary anguish and humiliation for the latter. How quickly we forget past experiences when we pick up the mantle of power ourselves.

I had similar thoughts when I read this. There is something unsettling about the way, at the heights of power, one man's more or less arbitrary decision can have devastating effects on others.
I felt like that when I got laid off one time. At least the accountant who calculated me out of a job had some numbers to back up his recommendation, unlike Grant's apparent reliance on hearsay.

I was disappointed to see Grant weighing in like that. Had Stanton not balked, it would have been a done deal, for no good reason.

No doubt this kind of thing happens everyday in the world of business, or the military, where cliques form, personalities clash, etc.

You misread much of this, because it was an effort to shelve Halleck (who has a monument in said park).

I'm not so sure about that. Grant could easily have emphasized his preference for Halleck, but instead suggested yet another alternative -- restoring Wright to power if Halleck could not be spared. This suggests he was mostly interested in removing McDowell.

Halleck was a good choice for the area, since he spent so much time there before the war.

And yes, Halleck has a monument in Golden Gate Park, as does Grant.