McPherson on The Rock 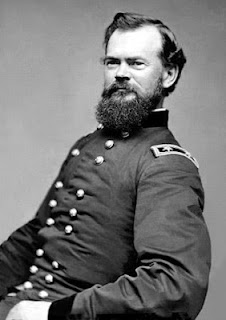 I borrowed this from the Alacatraz Facebook page (yes, of course they have a Facebook page). Here's a letter from James McPherson -- a great favorite of Grant and Sherman -- six years before his death, while commanding the Army of the Tennessee, at the July 22, 1864 Battle of Atlanta.
____________________

On December 31, 1857 James Birdseye McPherson was put in charge of the fortifications on Alcatraz. At the end of his first month he wrote to a friend in Wilmngton, Delaware, describing his lonely assignment:

Perched upon. a little rock Island the summit of which is One hundred and forty feet above the water and while watching the sun as he dips into the broad Pacific, or listening to the never ceasing roar of the breakers dashing against the rocks, I often think of my position one year ago, and instinctively draw a comparison between it and my present one--Candor compels me to state that in everything appertaining to the social amenities of life the "Pea Patch" (Fort Delaware) is preferable to "Alcatraz" and were it not, that being here in charge of this work is very gratifying to my professional pride I should regret the change deeply, as it is all my pride is scarcely sufficient at ties to keep my spirits up--though I am determined to make the best of the matter, looking forward joyfully to the time when I can return to the Atlantic States.

I have made but few acquaintances as yet in San Francisco, though I go over every Saturday evening and remain until Monday morning, and frequently at other times during the week when I get tired of playing the hermit--Fate or circumstances, or perhaps both combined have arranged it so that I am doomed to live on Islands, and though it may sound very poetical in the distance to speak of the "Gems of the Pacific" and all this manner of thing, I have not attained that sublime height of sentimentality, which places me above the practical unromantic incidents of every day life, and consequently hear something besides music in the deep sea's roar, especially as I get a good wetting about every third tie I go over to Town--San Francisco beats all the cities I have ever been in, in the way of Drinking Saloons, Billiard Tables, Cigar Stores and idle men "loafers" genteelly dressed, and if you happen accidentally (sic) to make the acquaintance of one of them, before you are aware of it, you will be introduced to any number more--for they have the greatest way of introducing folks I have ever seen-- I often congratulate myself when I am in Town, that I have a place to flee to, where the air is pure and where I can avoid meeting people whom I do not care to know-- for the more of them you know the worse you are off . . . .