The Battle of Santa Clara 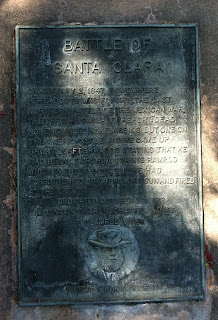 I had occasion to drive along historic El Camino Real in Santa Clara on Friday, weighing a vast array of yummy ethnic lunch options in mile after mile of unsightly strip malls (I settled for some Afghan kabobs). While there, I made time to revisit an old battlefield marker that ranks among my favorites of those installed by The Ancient and Honorable Order of E Clampus Vitus.

It's a little hard to read in the mottled sunlight, so I've provided a transcript:

On January 2, 1847, somewhere
hereabouts was fought the last
northern battle of the Mexican War.
The official casualty report: "Dead:
none, wounded: none, missing but one on
the American side and he came up
shortly afterwards stating that he
had been searching for his ramrod
which in the excitement, he had
forgotten to draw from from his gun and fired
at the enemy."