Shouldn't the Culbertson Guidon from the Little Bighorn be in the Smithsonian? 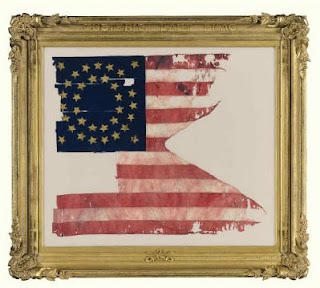 It's said to be worth $2 to $5 million, but an upcoming Sotheby's auction will tell the tale.  Would that this ragged flag could reveal the story that occurred beneath it in June of 1876.
I have been deeply fascinated with the Battle of the Little Bighorn since at least the time I first heard Johnny Horton singing "Commanche" on our old hi-fi in Schuyler, Nebraska, Sometime later, I read the Mari Sandoz books on the battle, and on Crazy Horse, and was hooked (in another nod to Johnny Horton, that same LP had "Sink the Bismarck," and I managed to find a copy of a book on that subject in our school library. I was in fifth grade when Horton turned me on to the Bismark, circa 1969 . The other night I saved the movie of the same name in my Netflix queue – I don’t remember ever seeing it).
The fight at the Little Bighorn has taken on an iconic stature in American memory far out of proportion to the size and scope of the battle itself, and its cultural legacy transcends the initial shockwaves that sped west and east from the remote interior, en route to the population centers of the then 100-year-old nation (Happy Birthday, America!). I have not read everything I could find on the battle, but quite a lot, and have been lucky to come of age at a time when great historians began to systematically clear away the murky cloud of mythology and popular history. Today, it may be the most written about battle in North America after the Battle of Gettysburg.
For over 100 years, the narrative description of the Battle of the Little Bighorn relied principally on the recollections and testimony of surviving members of Reno's command, a hodgepodge of incomplete and often confusing recollections translated in some fashion from Indians long after the fact, and the suppositions offered by burial parties and other early visitors to the battlefield.
Then, in 1983, a massive wildfire cleared the battlefield and presented irresistible opportunities for an exhaustive archaeological investigation of the field. What a stroke of luck, as it turned out. The resulting studies in the intervening years have produced the most compelling, and most complete story to date. It wasn’t exactly a case of "everything you know is wrong," but some traditional interpretations took a beating.
How did they figure all this stuff out? This NPS page sums it up:

The project archeologists chose to view the battlefield as a crime scene and by using a combination of forensic techniques such as studies of firing pin marks on cartridge cases and rifling marks on bullets, and standard archeological field, laboratory, and analytical techniques they have been able to determine the variety of weapons used by the various participants.

By combining crime lab methods with the archeological constructs of spatial patterning and individual artifact analysis, they have been able to discover evidence for the movement of individual firearms over the field of battle, verify cavalry positions, and define previously unknown Indian fighting areas.

Not everybody is happy with the changing story, of course. The traditional stories of a glorious "last stand" do not hold up very well under the new evidence. That is not to say that the soldiers under Custer's command were not brave, or that they did not die in heroic fashion, but the evidence on the ground suggests they were quickly overwhelmed in a rout, and were running for their lives before getting cut down. Whatever you conclude, much mystery remains, and for that reason the Little Bighorn will always excite the imagination. For Native Americans, of course, their greatest victory was also the death knell, making the fight along the Greasy Grass the proverbial beginning of the end.

Archaeology, History, and Custer's Last Battle: The Little Big Horn Re-examined, by Richard Allan Fox, is an essential read about what insights we've gained from the post-fire digs. Fox is of the opinion that it wasn't so much a "last stand" as a last chase, or a series of abortive running stands (as in pausing long enough to get a shot off at the people chasing you). Fox's marriage of archaeology, "combat modeling," and the documentary record sets a new standard for examination of the battle. Future authors may disagree with his analysis, but they cannot ignore it.
Likewise, Archaeological Perspectives on the Battle of Little Bighorn, by Douglas D. Scott, Richard A. Fox, Melissa A. Connor, and Dick Harmon.
Where Custer Fell, Photographs of the Little Bighorn Battlefield Then and Now, by James S. Brust, Brian C. Pohanka, and Sandy Barnard, is a beautiful work. Yes, that's the same (late) Brian Pohanka so highly regarded for his work as a Civil War historian. He loved studying this battle, and I believe this was one of the last major projects he saw to completion before his untimely death.

Check out this article by Thomas Powers, "How the Battle of Little Bighorn was Won," adapted from his book, The Killing of Crazy Horse, for a perspective built upon Indian recollections of the battle.
My most recent purchase is The Last Stand: Custer, Sitting Bull, and the Battle of the Little Bighorn, by Nathaniel Philbrick. I have high hopes for it, given the reception some of his other books have received (it’s shelved next to another Philbrick book, The Mayflower, also unread as yet. Can't wait to get to these two.

A great resource: Friends of the Little Bighorn Battlefield.
If you have a hankering to own a piece of this history, you need only place your bid with Sotheby's. This video explains the significance of the Culbertson Guidon. Answering my own question at top, I say "yes." Were I independently wealthy, I'm sure I would enjoy owning such amazing pieces of American history, but shouldn't things this delicate be entrusted to the care of museum professionals? Hopefully some rich guy will buy it and donate it to the nation.

As for the Bismarck, I couldn't have been more thrilled when Robert Ballard turned his attention to the German  battleship, and actually discovered the wreck in 1989. Too bad Johnny Horton wasn't around to see it.

David,
The thing that first sparked my imagination and interest in LBH was the wonderful 1980s National Geographic issue that featured the pioneering use of modern battlefield archaeological techniques to arrive at new interpretations of the battle. Wish I still had it.

Great post about the Little Big Horn, and props for highlighting the archaeological work done there. I've had the opportunity to know Doug Scott slightly, and he's a fascinating (and very funny) guy.