Here are the ANSWERS to the latest Google Earth quiz. If you want to take the quiz FIRST, then click here and start identifying the photographs. Otherwise, this post will spoil it for you.

Congratulations to Luke Lemke and Jim Epperson. Luke, true to form, got all of the answers nearly immediately (Thaddeus Lowe really could have used a guy like him). Jim muddled through in time, in the process correcting me on Image Number 1, the birthplace of Ulysses S. Grant.

Sometimes Google Earth's pushpin is off target, even when it's working from a specific address. In the image below, upon further study, I think the actual house is in the red circle. You can see the broad path leading from the road, and the historical marker in the large side yard—down the sidewalk to the left (click to enlarge). 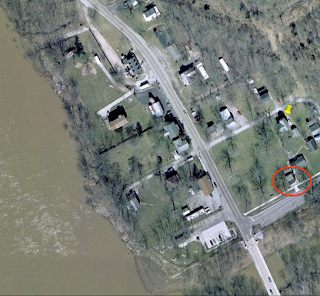 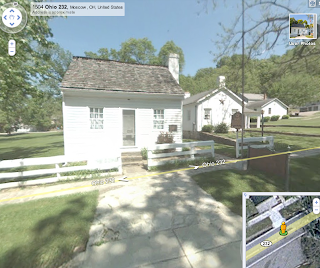 As promised, Luke and Jim will receive a hard-to-find back issue of a now defunct Civil War periodical. Nice work, gentlemen.

Image Number 1: Birthplace of Ulysses S. Grant, Point Pleasant, Ohio. Isn't it obvious? There's the mouth of Big Indian Creek, emptying into the Ohio River. According to this web site, the little cottage once "made an extensive tour of the United States on a railroad flatcar." Not many cottages can claim that.

Image Number 2: The Uncle John and Old Jube clue, and the church setting, could only mean this must be the scene of the Battle of Salem Church, where Early's Confederates, with reinforcements from Lee, turned back Federal troops under John Sedgwick on May 3 and 4, 1863.

Image Number 3: Quite a few of you knew right off the bat that this was Harpers Ferry, due to the confluence of the rivers, and the configuration of bridges and bridge abutments. The fort referred to was "John Brown's fort," the little engine house where he was captured.

Image Number 4: A star fort, on a big river, labelled "ineffective"—several of you got this one as well: Fort Jackson, below New Orleans.

Image Number 5: It was all in the clue, "Unchivalrous terms reluctantly accepted here." This is the Dover Hotel, in Dover, Tennessee, where U.S. Grant accepted the surrender of Simon B. Buckner, who was left holding the bag at Fort Donelson. Buckner called Grant's demand of unconditional surrender "ungenerous and unchivalrous." Grant didn't care.

Image Number 6: Looking down upon the parade ground at Virginia Military Institute. I thought the grounds, and the distinctive pathways inside the courtyard of the barracks would give it away. But it was not that easy, I agree. Wait! I just now realized that I left the coordinates for that image on the bottom of the photo. The ultimate clue.

Image Number 7: Most of you could see at a glance that this was Washington D.C., centering on the White House, but if I have my pushpin located correctly, several blocks to the right of the Executive Mansion, you'll find Ford's Theater.

Image Number 8: A familiar traffic circle to Gettysburg visitors. The pushpin points at the house of David Wills, where Abraham Lincoln stayed on the night before he dedicated the Gettysburg National Cemetery, and where he finalized the Gettysburg Address.

Image Number 9: Whose house is at the center of the photo? That would be the Lee-Custis mansion, or Arlington House, in Arlington Cemetery. Also known as the Robert E. Lee Memorial.

Image Number 10: I thought this one would be easy, but it all depends on what you study and where you've visited the most. This is the Kelly Cabin at Chickamauga. When I think of cabins on battlefields, I think first of Chickamauga, which has at least three of them, or more, that are important battlefield landmarks.

Image Number 11: The Cashtown Inn. Okay. Not that easy. When I said "the general is Inn," I thought the geekiest of you might imagine the once-ubiquitous Dale Gallon painting of Lee and A.P. Hill, on the road to Gettysburg.

Image Number 12: Admittedly obscure, this is the lone remaining building from the Battle of Glorieta Pass—more precisely, from the fighting at Pigeon Ranch. I thought the desert terrain, the reference to a sole surviving building, and the way the old road arcs in toward the modern interstate would be dead giveaways. Of course if you've never pictured this area in your head, all bets are off.

Image Number 13: The clue, "once the center of attention, now it is eclipsed," says it all. A small white building now eclipsed by giant construction. This is the White House of the Confederacy in Richmond. Luke Lemke pointed out that I changed the directional orientation of this image, which stumped him for a time. I didn't do that on purpose. I kept spinning it around trying to get my own bearings.

Image Number 14: I got tricky with this one by placing the Dunker Church at Antietam—one of the most iconic buildings in all of this nation's Civil War landscape—down in the corner and emphasizing the West Woods. This disoriented people who would instantly have recognized the church in conjunction with other features on the battlefield, or the nearby visitor's center.

Thanks for participating.
Posted by dw at 2:01 AM

I would like to thank the Academy, and all the little people who helped me out ...

Seriously, this was fun. I had trouble with a few, and David told me my guesses were wrong, which led to more guesses, and eventually even this blind squirrel found the right one (except the Cashtown Inn).

I came to this one late. Taking the quiz, I'd have gotten about half right off - VMI and the Kelly cabin immediately, the others after a minute or two. Several, though, were a puzzle. Glorietta pass, never. Ford's theater didn't occur to me, even though it seems obvious now.