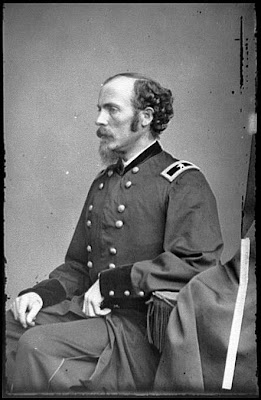 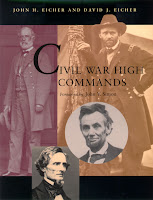 Emerson Opdyke, One of my favorites. I sort of recall there being some question about the accidental nature of his death - suicide was not unheard of among veterans, just as it is today.

After the war, Opdyke was a central player in the famous order to Thomas Wood at Chickamauga. Opdyke was in Wood's division, and a staunch defender of Wood, feeling he made the correct decision based on the orders he had. Opdyke corresponded with Wood and wrote numerous articles in defense of his commander, especially after the pro-Rosecrans version of the affair started to see print. His original correspondence is full of this stuff, including several gret letters from Tom Wood.

Tell me tell me! All my sources say McDowell died of natural causes in San Francisco in 1885. Or are you saying that Wright's name came up in discussions of Alcatraz and McDowell? That comma is confusing me...

BTW, I've compiled a similar list taken from Warner's and Hunt's books of alumni of two local colleges (since merged) - I was surprised to find they totaled in the twenties, including a couple of Confederates.

Sorry for the confusion. I meant that George Wright was mentioned in my blog entries about the incident with Capt. Winder and Alcatraz, and in the entry with correspondence between Stanton and Grant about whether to remove McDowell as commander of Wright's former Department.

Is the list you compiled posted on your blog? I'd like to have a look at it.

It's not up yet -I'll work on it. And to clarify, the list is of general officers (including brevets) who attended the two schools, not folks who died under unfortunate circumstances. But one on the list to which you linked was an alum: our friend from Ohio with the sad (but effective) courtroom demonstration!

Opdyke is a favorite of mine, too. What a stellar career. I read the Blue Acorn book on the 125th Ohio, Opdyke's Tigers, many years ago, but don't recall if it discussed Opdyke's later years.

I did not include suicides (at least overt ones) in my list, since that's a category all its own, and sometimes a result of chronic illness.

Over the years, as I go through reunion booklets looking for testimonials, speeches, etc, related to Chickamauga I run across tributes that talk about suicide - "So and So is remembered, he could not be here because of a tragic event, etc."

And I recall at least one officer who shot himself in his hotel room the night after a reunion.

It's not scientific or anything, but I get the impression that it was not uncommon among the vets. From what we know today, of course, it should not be surprising.

Hiram Duryea was known for being cruel ~ His son Harry shot him 6 times one night (the first shot did the trick but Harry kept shooting) The Duryea men could not keep wives as they were fond of firearms, drinking and threatening their families. Hiram's brothers were also known to be unstable, and Hiram's other children stayed away from him or committed suicide. The family history is full a violent stories. Hiram was a bully to his family .

Hiram's adirondack lodge is now a B&B. They have an extensive history of the craziness.

I really found it fascinating and compelling reading.