Walking away from a mountain. . . 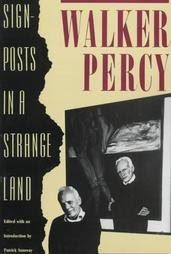 "The truth of it is, I think, that the whole country, South included, is just beginning to see the Civil War whole and entire for the first time. The thing was too big and too bloody, too full of suffering and hatred, too closely knit into the fabric of our meaning as a people, to be held off and looked at—until now. It is like a man walking away from a mountain. The bigger it is, the farther he's got to go before he can see it. Then one day he looks back and there it is, this colossal thing lying across his past."
—from "The American War," Commonweal 65 (March 29, 1957): 655-57; republished in Signposts in a Strange Land, by Walker Percy, edited by Patrick Samway (New York, 1991).

Percy, an increasingly obscure southern novelist and friend of Shelby Foote, wrote this essay in anticipation of the Civil War centennial. He makes a number of interesting observations in this essay, and another—"Red, White, and Blue-Gray"—that are deeply compelling and insightful, and, I think, surprising or unexpected to people whose roots and experience lie outside the mysterious South.

The other day my friend Steve, historian emeritus of Loudoun County, reminded me of the quote above, which I was once in the habit of including in Civil War Round Table newsletters, the Civil War Forum's start page, and the like. I was prompted to go back and read the two Civil War-related essays in the Signposts collection, after a long time since last looking them over. An often fascinating thing about rereading something after many years is that you are not the same person who read it the first time around. I'll try to explain the "surprising" or "unexpected" part in my next entry, and include some more passages from those essays.

David,
Do you have a favorite Percy novel? When Foote died I finally decided to read all his novels, while also getting into Percy just a little bit -- reading "The Last Gentleman" & "The Moviegoer", preferring the former. I need to get around to at least "The Second Coming" as well.

Both wrote very filmable stuff. Much like "Confederacy of Dunces", Hollywood seems to be unable to get "The Moviegoer" project off the ground. I think Foote's "September, September" would resonate with critics and much of today's audience.

The only Percy novel I have in the house is "Love in the Ruins," which I've started but never finished. I have read several of his essays, and have two books for which he wrote the introduction: "Confederacy of Dunces," and "Lanterns on the Levee."

You would recommend "The Last Gentleman" above all others? I really need to get one of his books under my belt. Haven't forgotten another recommendation you made, the Bloom book on "How to Read and Why."

I'm almost glad CofDunces hasn't made it to the silver screen -- how could you cast I. J. Reilly and not ruin the effect?

I've only read those two out the half dozen or so novels WP wrote, so my preference is only taken from a small sample. In fact, this post inspired me to go to the library and check out The Second Coming.

I agree with you about Dunces. It would be hard for Hollywood to strike the right note with Reilly. They would probably choose a loud, overacting slob like John Goodman.

"The truth of it is, I think, that the whole country, South included, is just beginning to see the Civil War whole and entire for the first time."

What's important is WHAT they see rather than some anti-southern propaganda. I'll have to check out this Percy fellow and see what he's selling.

Walker Percy's generations-long connection to the South infuses his work. And his love of his homeland is a big part of why he was so dismayed by fellow southerners who used phrases like "states rights" as code words for segregation and the disenfranchisement of black people.

I get the feeling your idea of "anti-Southern propaganda" is pretty expansive.