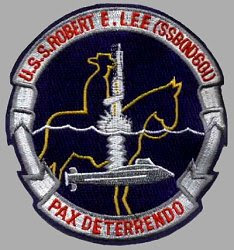 sending thousands of U. S. soldiers to their graves in a series of punishing battles. He led hostile forces within striking distance of Washington, and for a time, was the most feared enemy commander with whom the War Department, or the Commander-in-Chief, had ever contended.

Just under 100 years later, the United States named their newest nuclear-powered ballistic missile submarine in his honor. I do wonder if there are any, or many, other instances in world history in which a nation so honored the leading commander of opposition forces in a civil war. Perhaps there's something comparable in the storied history of the United Kingdom—I'll rely upon a reader for any info along those lines.

Lord knows there have been lots of things named after Robert E. Lee, including a university, and innumerable high schools. But it is fascinating to see military assets and forts named for one-time adversaries. In contrast to the U. S. S. Robert E. Lee, some of the most prominent and vital United States army installations are named for some of the least successful and most inept enemy commanders—namely, generals Braxton Bragg and John Bell Hood, to say nothing of the Right Reverend Bishop Polk.

Back to the Robert E. Lee, who wouldn't want a submarine named after that guy? She was the first U. S. naval vessel to bear the name, and was launched on December 18, 1959, not too long after the last Confederate veteran died (it used to be accepted that Walter Williams, who died on December 19, 1959, was the last living C.S.A. vet, but this has since been discredited. However, the precise "last" Confederate veteran is likely one of a handful of men who died in the 1950s. William Marvel wrote about this for Blue & Gray magazine at some point).

The Marble Man's nuclear sub was the first U. S. Navy ship, but not the first vessel to carry the

name. Here's a photo of the Giraffe, erstwhile steamer out of Glasgow that in 1862 became the blockade runner Robert E. Lee. After more than 20 successful runs through the Federal Blockading Squadron, she was eventually captured and converted for use in the blockade by the U. S. Navy as the U.S.S. Fort Donelson. Read more about that here.

This photo shows the Robert E. Lee near Mare Island Shipyard, off San Francisco Bay. She

would have had little trouble taking out the monitor Camanche, also pictured off Mare Island in one of my early blog entries.

The last one (below, click on for larger view) shows the Robert E. Lee's wardroom. Note the bust of famous enemy general next to the phone. What really caught my attention was the aquarium. Viewing this photo was the first time in my life I had considered the idea of miniature aquatic habitats aboard submarines. There's just something odd about it, like a bird in a birdcage, on an airplane. 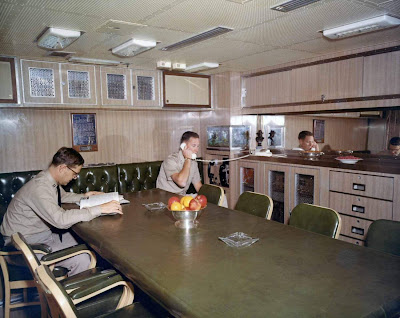 But what of actual Confederate naval heroes? Were they honored by their former foes in the U.S. Navy? Indeed. Just five months after the Robert E. Lee joined the Cold War navy, the U.S.S. Semmes, a destroyer named for the pre-eminent Confederate sea captain, Raphael Semmes of the C.S.S. Alabama, set sail (heavily damaged ten years later by a clumsy Greek freighter in Naples Harbor). What about James Iredell Waddell, skipper of the legendary C.S.S. Shenandoah? Sure thing. The U.S.S. Waddell, another destroyer—launched in 1963—received 11 engagement stars for service in waters off Vietnam.

I've nothing else to say on this subject. There was no particular point to this entry, beyond the satisfaction of musing about endlessly interesting threads in American history. All this web searching for destroyers brought to mind one named for someone in my own distant bloodline—it took a turn too early and followed some other destroyers into the rocks.

Well, at least the US Navy didn't name anything after Ambrose Burnside! I hated that guy (I never forgave him for the botched Battle of Fredericksburg). I have mixed emotions, though, about naming our ships after Confederate war heroes like Lee, Semmes, and Stonewall Jackson (they named a nuclear powered ballistic missile sub after him, the SSBN 634). Although they were brilliant wartime leaders, they were also the leaders in an armed revolt against this country. So I'm not really comfortable with federal US Navy warships being named after the same people who tried to tear apart this Union. Sort of like flying the Confederate Flag on board a US Navy warship today. Call me quaint, but it still doesn't sit well with me, especially since we have so many people who fought for or supported the North who could have ships named after them. For example, how many ships today are named after Joshua Chamberlain or Frederick Douglas?

Thanks for the note -- I suspect there may have been a USS Burnside at some point. I am more sympathetic to Burnside -- he gave a lot, but just wasn't a very good general. I've thought of him more kindly ever since Marvel's biography. He didn't ASK for the job before Fredericksburg, but answered the call.

Good point about Chamberlain and Douglas. I went "googling" for info on a ship named Chamberlain, which seems an obvious one, but all I could find were references to the starship Chamberlain at some Trekkie sites.

Somewhere, I assume, there's a record of the War Department's/Pentagaon's decision to honor Confederate officers. Does seem odd though.

I guess there are a number of unusual names (at least by conventional naming) in the "41 for freedom" boats.

What interests me is the Chancellorsville, which AFAIK, is the only ship named after a defeat. There are other ships named after cities or areas which have also been the sites of defeats, but I don't think they were named to memorialize the battles themselves.

Now that is fascinating -- I didn't know about the Chancellorsville. Just doing a quick scan, I noticed the USS Bull Run, but no Manassas as one might expect.

Thanks for pointing that out. So far, no sign of a USS Little Bighorn.

I checked out your reference to the "41 for Freedom" boats -- http://tinyurl.com/39f6m7 -- and you're right, it commemorates a very disparate group, including a Hawaiian king (Kamehameha), and a historian (Bancroft). Interesting!

Some pretty cool insignia, too.

The closest which comes to mind for the Royal Navy would be the HMS Cromwell. (which was opposed by the Crown at the time I think)
Of course as a state with an awful lot of dynasty changes, practically everyone who has ships named after them is just another historical figure.
A brief tangent, it brings to mind the fact that Prince Eugene of Savoy had ships named after him in four navies

Hey guys, the Confederate armies of the South were composed of Americans, mainly from the original founding colonies that defeated the British so we could have our own country. The South continues to be the main regional source of today's soldiers. Yeah, I think naming a battleship after a southerner that fought for his region is okay. Actually, it's fine if they name the whole fleet after Johnny Reb. And you thought we southerners would be okay with second-class citizenship? Nice try.

They weren't just any Americans. They were Americans who went to war with the United States. You can argue that that distinction is meaningless, but it wasn't meaningless to people who lived through that era. Nor was it meaningless from a legal perspective -- if I'm not mistaken, for example, Robert E. Lee's citizenship was not officially restored until the 1970s.

DW, did you mean 1870s? Or did Jimmy Carter use his executive power?

Either way, you're right, they weren't just any Americans, they were mostly the original English American immigrants. In that respect, it was more their America than the late-comers.

As for your comment that Southerners "were mostly the original English American immigrants. In that respect, it was more their America than the late-comers" -- that's just absurd.

Hate to break it to you, but the vast majority of Union soldiers were native born citizens, including nearly 180,000 native born black southerners, and a great many white southerners.

DW, the point I'm making is that if you can create make-believe reasons to make southerners second-class citizens such as not naming a military ship after a southern American, then I can do the same, that is, the South had the oldest English colony and therefore is the most American.

And the post-humous restoration of citizenship is the stupidest thing I've ever heard - none of the Confederates needed any northern "blessing" as they were some of the first Americans. What an empty gesture reflecting ignorance.

The Confederacy was comprised of English, Irish, Scottish, Native American, pan-European and even black soldiers. New Orleans was second only to NY as an immigrant port.

I picked up today's paper and what did I see but the near completion of the slave cemetery monument in Manhattan. Doh! But the North is morally superior right? I REALLY like those who argue that because the South legally had slavery longer than the North, that somehow the North wasn't complicit in it. It's like saying that if I commit a crime in 1990 and you commit one in 2000, then I have immunity and you are the criminal bastard. You're brilliant!

Anonymous wrote: >>DW, the point I'm making is that if you can create make-believe reasons to make southerners second-class citizens such as not naming a military ship after a southern American, then I can do the same, that is, the South had the oldest English colony and therefore is the most American.<<

Dear anonymous: the problem with your eager efforts to defend the South’s honor is that you have a big chip on your shoulder, and let emotion get the best of you, causing you to offer irrational non sequiturs and to attack imaginary slights. I did not create any make-believe reasons not to name a ship after a Confederate. In fact I didn’t even suggest that ships should not be named after them. I merely commented on how interesting it was, since these people went to war with the United States. For you to pretend that leading hostile armies against the United States is an irrelevant distinction is just silly. And for you to argue that the South was “the most American” is effectively an open admission that you have no rational basis for your conclusions.

Anonymous wrote: >>I REALLY like those who argue that because the South legally had slavery longer than the North, that somehow the North wasn't complicit in it. It's like saying that if I commit a crime in 1990 and you commit one in 2000, then I have immunity and you are the criminal bastard.<<

Dear anonymous: The North was certainly complicit in the establishment of slavery, just as Union veterans were later complicit in Lost Cause efforts to transform the war from a tragic effort to perpetuate slavery into a glorious fight over principles.

Your analogy of the two criminals above is predictably skewed to the point of being nonsensical. The North abolished slavery. The South insisted the slave trade remain open for many more years as a condition to ratification of the constitution. Once their domestic trade was well stocked, they maintained the institution for decades longer, eventually seeking to break up the nation in order to expand and perpetuate slavery.

So for your analogy to be more accurate, you would have to have both people committing a crime in 1990. Later, one individual renounces a life of crime, but the other celebrates it and continues his criminal behavior for decades, ultimately threatening physical violence upon anyone who dare ask him to stop.

While Lord of the Admiralty during World War I, Churchill wanted to name a battleship "Cromwell." King George V unceremoniously vetoed that concept.