Late on the afternoon of July 11, after two weeks revisiting some familiar and familial locales in Northern Arkansas and Southern Missiouri . . . 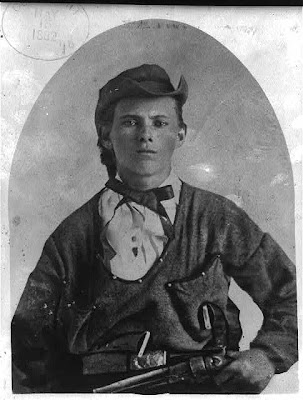 I was transporting my brood northward in a rented Pontiac Torrent en route to Kansas City, there to catch a flight to San Jose. We had a little time to spare, and I had already done what every red-blooded reader of this blog would have done – scanned the map for little red boxes – historical sites – within striking distance of the airport. The closest and most interesting to me was in Liberty, Missouri – the Jesse James Bank Museum. Regrettably, the James farm was a few too many miles out of reach.

It’s an odd aspect of American society that we often tend to romanticize outlaws and cold-blooded murderers. Almost as far back as I can remember, the James Gang held a particular fascination for my friends and me. We all gladly bought into the sympathetic (and wholly inaccurate) image of an American Robin Hood. Same with Bonnie & Clyde. These are not people you want your kids to emulate, but robbing banks and going out in a blaze of glory will cause the son of a C.P.A. to sit up and take notice. Certainly Hollywood plays a key role in perpetuating the sympathy – Warren Beattie’s wide, easy smile said it all. And even as an adult, fully cognizant of the murderous ways of Jesse James and the Younger brothers, a beautiful movie like "The Long Riders," with its Carradines, Keachs and Quaids, full-length dusters, slow motion ricochets, and haunting Ry Cooder soundtrack, makes one wistful about a life that ends in (famous) tragedy.

But I digress. The Bank Museum in Liberty had a nice little gift shop, and you know that if you cannot come away with some kind of reading material, you may as well not even have stopped. I picked up Ted P. Yeatman’s, Frank and Jesse James, the Story Behind the Legend, which pleases the hand with its heft and 1-1/2 inch spine bulk. I’ve since seen some complimentary reviews, and am encouraged by the nearly 100 pages of lengthy, narrative endnotes.

The Yeatman book came out in 2000 (Cumberland House, Nashville). Here is a modern, and by some accounts, definitive biography of the James Brothers, released over a century after Jesse’s death. And two years later comes another “definitive” account, T. J. Stiles,’ Jesse James: Last Rebel of the Civil War [for those of you keeping score at home, there is your first official Civil War reference in this blog entry]. By the looks of things, despite being beat to the punch, Stiles’ book got the most attention, including a review by James McPherson in the New York Review of Books.

It’s too late to continue tonight, even on the Left Coast. So we’ll pick up tomorrow night (Thursday) with Jesse James, Part Two: more mention of the dueling biographies, high praise for a cool blog I just discovered, and commentary on perhaps the best Jesse James book of all, a piece of fiction I was surprised to learn is already a “major motion picture,” replete with pretty boy superstar in the lead role.
[photo at top: Jesse James, 1864. Library of Congress]
Posted by dw at 3:11 AM

David,
Did you get a chance to visit Lexington on your way into K.C.? It's a wonderful state battlefield park.

I'll be interested in your assessment of the two James bios.

No, I'm sorry I didn't build in enough time on the return trip. On the front end, I drove around Carthage looking for various sites. But here again, I was sadly unprepared. I tried to dig up a copy of the driving tour from David Hinze's book (Savas) just before I left, but to no avail. It was going to be hard to sell the kids on that one anyway, after several hours in the car.

Stopped at the Truman birthplace, too, but it was closed. Had to settle for peeking in the windows, and trying to impress the boys with the fact that this modest little home in this modest little town produced a president of the United States. This was enough to get them to look up from the GameBoys to study the structure for a fleeting moment.

I have visited Lexington, and found it worthwhile. Nice little museum/gift shop, and some sense of the seige. Nice little town, as well.

the only time I was close enough to the James farm, it was closed.

Perhaps some day I will get to Northfield Minnesota for their accurately but awkwardly named celebration of the famous James-Younger raid:

Great post! I grew up in Joplin in SW Missouri, but had not caught the Civil War "bug" yet as a kid...oh, how I wish I had! Carthage, Baxter Springs, etc., would have meant so much more to me. I did live in Columbia, MO for several years so did get a cahnce to make it to Wilson's Creek a few times. A hi-light was when my late friend, Tom Anderson, drove me out to explore sites associated with the Centralia Massacre.

Keep up the Great Work!

Thanks for the link -- I've never been to Northfield, but will try to fit it into a genealogical trip I'm planning for that area.

I see what you mean about the name of the festival, or whatever it is. Doesn't sound quite as inviting as Lake Wobegon's "Toast and Jelly Days."

Appreciate the note. I lived in Joplin as a wee child (kindergarten through 2nd grade), and that was one reason I made a sidetrip there this last trip -- most of my earliest memories are from there. I found the old house, and also fleshed out some sketchy memories I had of a bear they used to have at Schifferdecker Park. None of my five siblings had any recollection of this, which made me doubt the memory.

I had looked around the park and was about to move on when my wife convinced me to go into the museum and ask someone (a novel idea that I nearly rejected out of habit). Happily, the curator there showed me where to find the now-buried den, and the bear's tombstone. That was satisfying.

I know what you mean about developing an interest in the things you once could have easily driven to, but which now are vast distances away. I did visit Wilson's Creek on one of the Civil War Forum's tours, and that was a worthwhile trip.

It *is* a small world, isn't it? I grew up in Joplin...lived there from '65-'74...attended St. Mary's grade school (grades 1-4), played for the Wiggins Bakery baseball team, and definitely have fond memories of Schifferdecker park myself. Our family still has very good friends there.

That's pretty interesting. We moved there from New Orleans in about 1964, and moved again in the summer of 1967. I don't recall the names of the schools I attended.

It was fascinating to drive around the town for a couple days, though pretty much all of my memories involve the house and surrounding grounds, and the park.