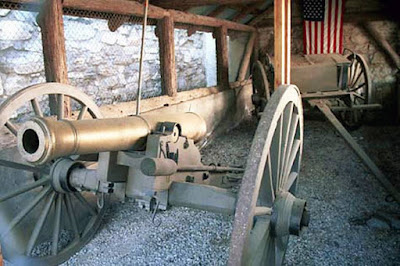 From the San Luis Obispo Tribune
July 4, 2015 — Dan Krieger - Special to The Tribune

"A pro-Union group, “the Volcano Blues,” petitioned the arsenal in Benicia for some artillery. All that could be spared was a 737-pound, Boston-manufactured brass cannon from the Mexican era. It fired a 6-pound ball and could do a great deal of damage to the quickly built wooden structures in Volcano. The gun was transported by riverboat to the Carson Pass road and smuggled into town. It was renamed “Old Abe” and mounted on a movable wooden carriage."

Below, an image of Old Abe in the Library of Congress, dated April, 1940: 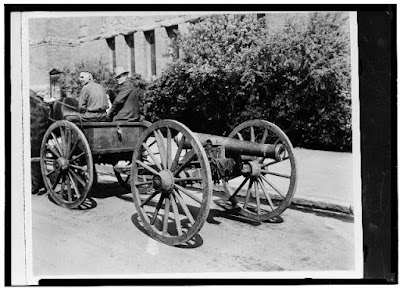 According to this Western Mining History website, Old Abe has a brother at Shiloh. I'll need to check with the NPS about that:

"The cannon was cast by Cyrus Alger & Co. in Boston in 1837 and is the first of two 6-pounders made on the same day to be stamped with serial number 4. The cannon was never fired. The other cannon still survives at Shiloh Battlefield and is called "Shiloh Sam". Abe is the only cannon of that age in the U.S. still on a nineteenth century wooden carriage, and has had an interesting history all on its own."