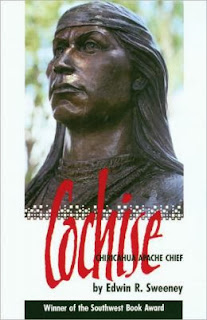 In September I attended the 34th Annual Order of the Indian Wars Assembly in Tucson—“On the Trail of Geronimo"—for a few days of talks and tours. Some of this country's top authorities on the Apache were in attendance, including Ed Sweeney, who has authored biographies of both Cochise and Mangas Coloradas. In four days we covered a lot of ground with stops at Mission San Xavier del Bac, San Jose de Tumacacori Mission Church, The Horse Soldier Museum, Fort Huachuca, Tombstone, the Arizona Historical Society Museum (with a special display on Geronimo), Fort Lowell, Dragoon Springs, the American Indian Museum (Amerind). Along the way we drove past Cochise’s stronghold.

For me, the highlight of the weekend was our Sunday hike through the heart of Apache Pass. Our trail took us across a clearly discernible stretch of the Butterfield Overland Mail Route, near the site of the Apache Pass station. Apache Pass station also marks the scene of the infamous Bascom Affair—known to the Apache as “Cut the Tent—the betrayal of Cochise that, along with the execution of some of his family members, led to eleven years of unremitting warfare between the U.S. and the Chiricahua Apaches.

Continuing beyond this point, we passed Apache Spring, the water source so critical to travelers in the area, and a favorite spot for the Apaches to ambush passers-by. Here, too, is the ground over which the Battle of Apache Pass was fought on July 15-16, 1862, when a detachment of Colonel James H. Carleton’s California Column under Captain Thomas L. Roberts twice drove Apaches under Cochise and Mangas Coloradas from defensive positions on the high ground above the spring.

To secure this important mountain pass once and for all, Carleton established Fort Bowie, and our hike continued past the ruins of the original fort, as well as the grounds of the relocated fort. Today, there is a NPS installation there, with a small museum and bookstore.

The Battle of Apache Pass sesquicentennial fell squarely between the sesquicentennials of the Seven Days Battles, and Second Bull Run, so you're forgiven if you forgot to commemorate it.

I have recently been reading 'Making Peace with Cochise: The 1872 Journal of Captain Joseph Alton Sladen' that Sweeney helped put together.

Fascinating reading and really puts Howard in a different light.

Thanks for the comment. Sweeney is reportedly finishing a book on Tom Jeffords, a character once portrayed by Jimmy Stewart.