Review: Decided on the Battlefield, Grant, Sherman, Lincoln and the Election of 1864 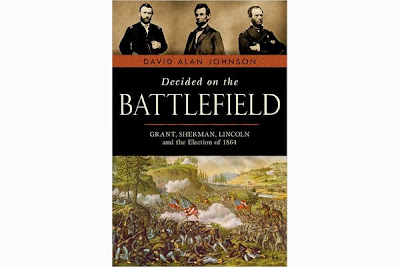 Decided on the Battlefield: Grant, Sherman, Lincoln and the Election of 1864, by David Alan Johnson (Prometheus Books, 2012).

Judged solely by its cover, this Prometheus release promised to be an interesting and insightful examination of the critical 1864 presidential election – how it came to unfold the way it did, and the possible ramifications to the nation had Abraham Lincoln lost his bid for re-election. Unfortunately, there is very little new introduced that could not have been gleaned from a general history of the war, and the author’s almost complete reliance on secondary sources (Bruce Catton is cited 43 times, Carl Sandburg 21, and so on), makes for a shallow treatment of a deep subject. Both the seasoned student and the well-read buff are likely to be dissatisfied with what, in the end, amounts to a simple affirmation of what many have long understood to be a Civil War truism—that the ascendancy of Grant and Sherman, and their slow-but-steady battlefield successes, particularly the capture of Atlanta in the run-up to the election—assured the reelection of Lincoln, and ended any hope of an independent Confederacy.

Decided on the Battlefield is not without merit. It is an easy read with a serviceable account of military events. Informed as it is by the popular histories of Catton, Shelby Foote, Doris Kearns Goodwin, et. al., the story is held together by an efficient, quick-moving narrative adorned with some of the literature’s most familiar anecdotes. Most interesting, to me, was the author’s discussion of the main party’s respective national conventions, and for those topics—at least—official proceedings were liberally consulted.

Whatever the book’s shortcomings in the main text, it goes completely off the rails in the Epilogue. To ram home his point about the over-arching importance of Lincoln’s victory, the author devotes 18 pages to a bizarre and thoroughly pointless reverie about how things would have been different had Lincoln gone down to defeat. He doesn’t merely speculate about the Balkanization of North America, but paints an elaborate alternate history up through the Cold War and into the 1980s, even imagining, by name, the presidents of five separate American countries (the U.S., the C.S.A., Texas, Utah, and California, the last governed by President Ronald Reagan). In this fantasy, the C.S.A. (eventually the Confederate Commonwealth after annexing Cuba) did not send troops overseas in WWI, but since Tennessee seceded from the C.S.A. and rejoined the U.S. in 1866, U.S. troops in the First World War do include men from the Volunteer State. Thus, we’re told, Lincoln’s election loss in 1864 would have had no bearing on Tennessean Alvin York winning the Medal of Honor for actions in the Argonne Forest. I’m pretty sure the author didn’t get that last part from Bruce Catton.

Library Journal had this to say about DECIDED ON THE BATTLEFIELD:

Popular historian Johnson (Betrayal: The True Story of J. Edgar Hoover and the Nazi Saboteurs Captured During WWII) is persuasive in demonstrating that if George B. McClellan, the Union general whom Lincoln relieved of battlefield command in 1864 only to see him go on to be the Democratic presidential candidate against Lincoln that year, had bested his old commander-in-chief in that election, the course of American history would have been different. The Peace Democrats could have ceased hostilities immediately, granted the Confederacy its independence, and permitted the continuation of slavery where it existed. But as 1864 progressed, Lincoln's political salvation came with Grant's war of attrition against Lee's army. Equally important for this study was Sherman's dramatic push through Georgia with modest Confederate resistance. Johnson correctly notes that these Federal advances compelled the Confederate replacement of the dithering Gen. Joseph E. Johnston with the more reckless Gen. John Bell Hood. Sherman benefited from Hood's mistakes and took Atlanta in September 1864. The author concludes that this iconic victory, in turn, buoyed Northern confidence in Lincoln's prosecution of the war and insured his return to office. Johnson's wry epilog is aÅmasterpiece of alternativeÅhistory predicated on Lincoln's defeat for reelection. Verdict An engaging narrative, solid research, and command of detail all do great credit to the significance of this topic in Civil War historiography. Highly recommended to all devotees of Civil War history.-John Carver Edwards, Univ. of Georgia Libs.

Every other reviewer had similar things to say about this book. The person who wrote this review is certainly entitled to his opinion, but anyone who judges a book by its footnotes should not be taken very seriously.

On the contrary, one of the first things I and other serious readers of Civil War literature do is scan the notes and bibliography. It's a quick litmus test of the scholarship that went into the book (whether a book should be taken seriously or not). Many Civil War book buyers won't bother with a book that looks like a simple rehash of secondary sources, since they've likely already read those sources themselves (Catton, Foote, et. al.).

Life is short and the list of books to read is long. I read your book because the subject matter interests me.

What the reviewer for Library Journal fails to mention is that virtually every reputable history of the war explores the fact that the siege of Petersburg and especially the fall of Atlanta turned the tables for Lincoln in the 1864 election.

Finally, in my experience, the *last* thing a serious Civil War book buyer/reader wants to see in a nonfiction book is a digression into "alternative history." If they put value in that, they'd turn to Harry Turtledove or MacKinlay Kantor.