Better off without 'em 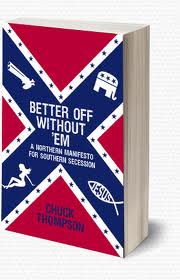 These are certainly interesting times for political discourse in this country. Who could have foreseen that “legitimate rape” would become a presidential campaign issue, or the sesquicentennial sentiments of an Arkansas politician commenting, in 2012, about how lucky the descendants of slaves are to have had their ancestors brought to America in chains (the old blessing-in-disguise argument). And now, some of our disgruntled fellow citizens have raised the specter of secession again, because they reject the results of a democratic election. That sounds familiar.

The release  of Better Off Without 'Em, A Northern Manifesto for Southern Secession, by Chuck Thompson (Simon & Schuster: New York), couldn't be more timely. I've downloaded it to my Kindle today and will likely comment on portions of it as my reading progresses.

There are many reviews of Thompson’s book out there, but this is a good one to start with (originally published on Daily Kos, Sunday, October 14, 2012).

I may read this. Just moved to Fredericksburg VA 9 months ago from MI. The main street in town is Jefferson Davis Hwy. Every other street seems to be named for a Confederate general. A recent letter to the editor in our local paper decried an NPS exhibit about the Yankee occupation during the Civil War, stating that it would be like France celebrating the Nazi invasion. It was a serious letter. And this is a northern VA college town. As a CW buff I go to lots of battlefields and historic sites in VA and other southern states. The Lost Cause sentiment is fervent among many docents and tour guides I encounter. The most recent atrocity was attending an October lecture by Tony Horwitz about his John Brown book, Midnight Rising. He made the point that Brown foresaw,and helped spark the Civil War. Several people stood up to inform him that the war was not fought over slavery. Sigh.

Living in Northern California, I don't see the things you're describing up close and personal, but even here it's not uncommon to hear those sentiments expressed (that it wasn't really about slavery). That's an article of faith that transcends the literature, and reason.

Horwitz, of course, would not be surprised by those questions or comments.

It is unfortunate that so many tour guides and docents, as you mention, perpetuate that stuff. That kind of institutionalized misinformation is hard to combat.