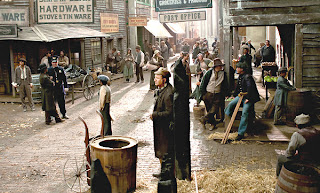 From a New York Times review:

"Ostensibly the new series is about a former boxer and Civil War veteran turned police detective, Kevin Corcoran (played by Tom Weston-Jones), an Irish immigrant who returns to the Five Points after serving in the Union Army’s 71st Regiment to find his daughter dead and his wife missing. New York is really the main character."

I heard about this program at the last minute, after seeing mention of it on a Facebook history page, and tuned in just in time for the premier episode. I found it rather gripping, and the atmosphere of the lower Manhattan, 1863 ghetto to be powerfully presented. It's a dark and dreary place, with a frontier feel, as suffocating, dim, and polluted as Ridley Scott's magnificent portrayal of a futuristic Los Angeles in Blade Runner. And so far, so good on the acting and writing. I hereby declare Copper to be "very promising."

I'm very interested to see exactly how Freeman (the black CSI genius) and Corcoran "served together" in the army at Chancellorsville...

They could have picked a more 19th century-sounding name for the main character than Kevin. According to the Sailors and Sailors database only three Kevins served in the war.

Will, that's interesting. At least it's Irish.