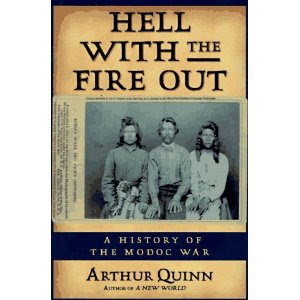 The partial quote at top is attributed to the Modoc Chief Scarfaced Charley.

Last Monday I asked my faithful reader(s) what three particular Civil War generals had in common. I posted a link on Facebook, where one well-versed individual came up with the answer after I narrowed it down with a comment about Indian Wars.

The answer is that Generals Wright, Howe, and Thomas all had a son or nephew killed on April 26, 1873, during the Modoc War (though General Wright preceded his son in death, having drowned in 1865 while en route to his new command).

Man-for-man, the Modoc War was among the costliest ever engaged in by the United States. As many as 600 troops (at highest count) did battle with roughly 50 Modoc warriors for six months. Official tallies put U.S. casualties at 53 soldiers and 17 civilians, while the Modoc lost 15 (five KIA). The resources, human and otherwise, expended on subduing this one band of Modoc was considerable. 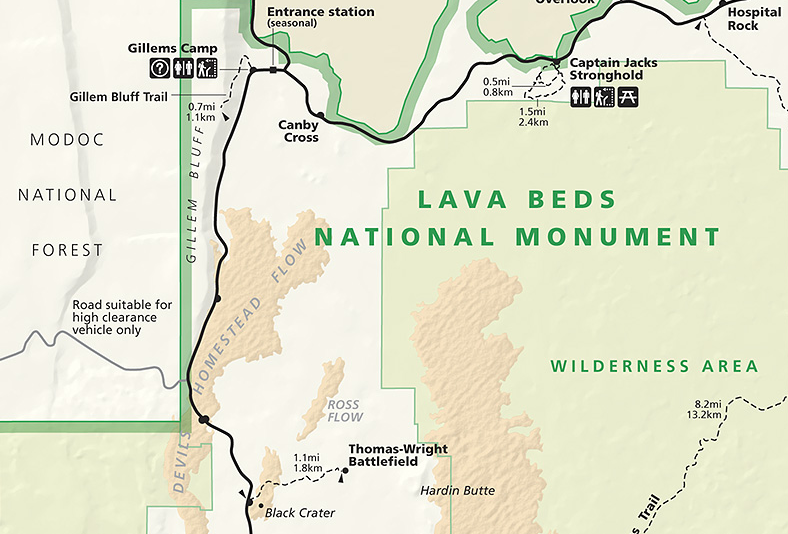 There are a couple of good books on the subject, including Hell with the Fire Out, A History of the Modoc War, by Arthur Quinn.  And, as pointed out earlier, I enthusiastically recommend The Modoc War, Its Military History and Topography, by Erwin M. Thompson.

Hell with the fire out is an apt description of the weather and the topography—it is high desert, and largely covered with ancient lava flows. Though the First and Second Battle of the Stronghold failed to dislodge the Modoc from Captain Jack's lava fortress, the Indians were eventually compelled to withdraw, which they did unseen. Uncertain of the Modoc positions, and hoping to be able to move howitzers and mortars to a strategic butte four miles from the main army encampment, Colonel Alvan Gillem called upon Captain Evan Thomas of the 4th Artillery to lead a patrol toward Sand Butte (now Hardin Butte).

Like his father, Thomas was a veteran of the Civil War, brevetted for gallantry for actions at both Fredericksburg and Gettysburg, but fighting Indians was not something for which he had must experience. The other generals' kin, likewise veterans of the Civil War, were First Lieutenants Thomas F. Wright (son of George Wright), and Albion Howe [nephew of Albion Parris Howe). Three more commissioned officers joined the patrol, 2nd Lieutenant George M. Harris, 1st Lieutenant Arthur Cranston, and Dr. Barnard A. Semig. In addition to a guide and civilian packer, Thomas's patrol comprised 59 enlisted men (Company E, 12th Infantry, and Batteries A and K—the latter serving as infantrymen—of the 4th Artillery).

The patrol was handled carelessly from the start, and little attention was given to guarding the flanks during a march through areas of jumbled rocks, deep cuts, and low ridges that  limited lines of sight. This allowed Modoc warriors to trail the soldiers and effectively surround them when they stopped for a midday meal. The Modoc warriors—well-armed, and by all accounts skilled riflemen—attacked seemingly from all directions, and military order among the soldiers quickly dissipated as some men scattered and others sought protection in small groups. The gunfire could be heard back at Gillem's Camp, and in the now-occupied Stronghold, but relief parties started too late and were compelled to wait for dawn before they could locate survivors.

Thomas, Wright, and Howe were dead, Thomas shot four times, and Wright three. The position of many soldiers' bodies signaled the shock of their last tragic hours. A member of a relief party described them as lying in "different forms of anguish and distortion, some in the position of desperate defense, others prostrate. . .in utter helplessness." Most had multiple bullet wounds, and many were stripped of their uniforms.  Second Lieutenant Harris was mortally wounded, and Cranston was missing. Twenty enlisted men were killed in action, and sixteen were wounded. Out of sixty-seven men in the patrol, at least 43 were casualties.

The army later claimed to find the bodies of five warriors on the Thomas-Wright battlefield, but the Modocs themselves, after the war, claimed to lose only one man in the fight. 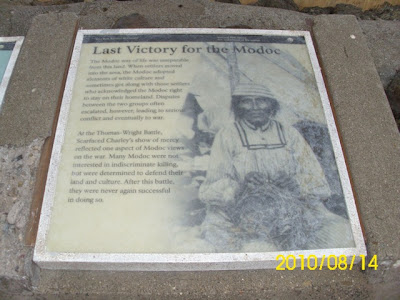 It has been proposed that the reason the Modoc had murdered General Canby during peace negotiations, two weeks earlier, was the belief that by striking a devastating blow against the top leadership of the soldiers, the rank and file would abandon the effort to subdue the Indians in the Stronghold (a plan that might have borne fruit against other tribes). If so, it was a grave miscalculation. Indeed, we know that Canby's assassination, and the stunning defeat of Thomas's command, simply meant that far more troops would come, and would continue to come. Captain Jack and the Modoc leaders who pressured him against his judgment to kill the sympathetic Canby, could never have anticipated the resolve of the white warrior then en route to take Canby's place, Jefferson C. Davis.


Map from Erwin N. Thompson's, The Modoc War, Its Military History and Topography. This book was available for online viewing at the Lava Beds NHS website, but does not appear to be at present].