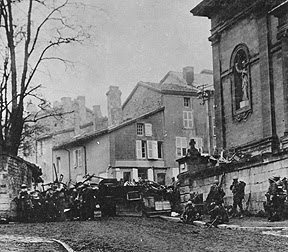 World War I -- known at the time as “The Great War” -- officially ended when the Treaty of Versailles was signed on June 28, 1919, in thePalace of Versailles outside the town of Versailles, France. However, fighting ceased seven months earlier when an armistice, or temporary cessation of hostilities, between the Allied nations and Germany went into effect on the eleventh hour of the eleventh day of the eleventh month. For that reason, November 11, 1918, is generally regarded as the end of “the war to end all wars.”
In the photo above: "Soldiers of the 353rd Infantry near a church at Stenay, Meuse in France, wait for the end of hostilities. This photo was taken at 10:58 a.m., on November 11, 1918, two minutes before the armistice ending World War I went into effect" (Photo and text taken from this page at the Department of Veterans Affairs).
Posted by dw at 5:00 PM

A very evocative picture. Thanks for posting it and giving the description.