Time Travel? or feverish hallucination. . . THE NADIR OF LINCOLN STATUARY 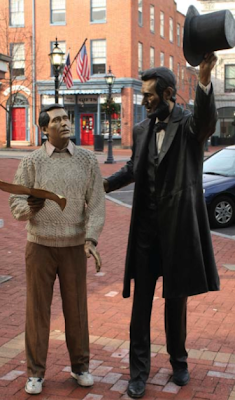 LAMB: What did you see in Gettysburg itself?
FERGUSON: Gettysburg is a very odd place, you know and I figured that it’s got a kind of—sort of a wasted feel to it. It doesn’t, you know, you’d think that they would have done all kinds of things to capitalize—they have two million visitors a year or more and—but there are no sort of like yuppie restaurants, no high-end gift shops …

LAMB: Put that into perspective that’s twice as many as visitors as the Supreme Court has a year.
FERGUSON: Yes, sure. Yes. Of course, they don’t have any yuppie restaurants at the Supreme Court either but that’s—they’ll get it sooner or later. But you know and I—it comes from the odd nature of the place. This is a place where several hundred thousand men got together for three days trying to kill each other and 11,000 of them succeeded and to try and turn a place like this into a vacation spot, you’re going to get a kind of a cognitive dissonance there.
LAMB: What’s the Perry Como statue?
FERGUSON: Right underneath the window of the house where Lincoln wrote the Gettysburg address or touched up the Gettysburg address, the night before he delivered it, on the Gettysburg Square, is a statue of Lincoln with Perry Como or so it said. Actually, what it is, is it’s Lincoln life-size next to sort of every man tourist.
LAMB: By the way, for those who might not remember who it was.
FERGUSON: People have forgotten Perry Como, this is awful to say the least. He was a crooner, a sort of a Frank Sinatra without the overtones of danger and sexuality but anyway, so he just

looks like every man, which was Perry Como’s appeal and he’s in a cable neck sweater and Lincoln is talking to him. One of the things I do, in the book and I’ve tried to, as a theme to weave in, is everywhere I went I found a new Lincoln statue. Lincoln statuary is a fascinating subject in and of itself. It reflects this—our own changing view of Lincoln. The opening chapter’s about the statue that was put in at Richmond, which is a very small, life-size statue. The last chapter is about Lincoln Memorial, which of course, is a huge Lincoln statue and there’s a lot to learn about how we’ve seen Lincoln and what we think of him now by the kind of statues we put up and the one in Gettysburg is incredibly banal and sort of cartoonish and silly and it’s considered by most Lincoln buffs to be the low point of Lincoln iconography.
Posted by dw at 1:19 AM

Ferguson clearly did not enough research on Gettysburg, otherwise he would know why the town is the way it is.

I was a reporter in that area for several years. And my newspaper had covered the town and its economy pretty extensively. (And my boss was a licensed battlefield guide.)

But the tourist season is only really spring and summer (especially big in the summer, during the re-enactment). NO ONE goes to Gettysburg in the winter. So no one was really patronizing the shops and the restaurants for a good portion of the year. The town residents went instead to Maryland or Harrisburg or Hanover or York for just about everything.

And, as someone who spent almost every day there for more than two years, I think they did a pretty good job. There are high-end yuppie restaurants (The Dobbin House, a house built in the late 1700s where 1700s era food is served and the servers dress in time-appropriate attire; and The Farnsworth House, a Civil War era hotel now converted to a restaurant which serves Civil War era food; and the malt shop), and sandwich shops and Chinese restaurants and bars. There are Civil War-themed gift shops and clothing shops, but also book and shoe shops.

Thanks for the interesting comments. I'm sure your observations are right on the money.