My mailbox is regularly crammed with catalogs from several of the university presses that still do Civil War titles, Plains Wars and western history 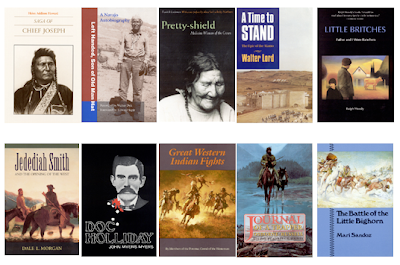 I look forward to seeing some of them more than others. I like to scan them to discover who's written one more of the books I forgot to write. And I like to make note of those interesting-looking new titles about subjects that weren't on anyone's radar. So many presses are quietly doing solid work in the Civil War arena, like Tennessee, UNC, Fordham, LSU, Kentucky, Kansas.

Two of the catalogs that often hold the most promise—for my particular interests—are those of The University of Arkansas Press (lately), and University of Nebraska Press (always). Arkansas' Spring 2007 catalog announces the latest in their phenomenal "Portraits of Conflict" series, A Photographic History of Tennessee in the Civil War, by Univ. of North Texas associate professor Richard B. McCaslin. Previously, the series has covered Georgia, South Carolina, North Carolina, Mississippi, Louisiana, Texas, and Arkansas. All are stunningly attractive works, expensive to manufacture, and expensive to buy—but thank goodness someone is putting these out. I don't actually own any of the volumes of this series, because they cost as much as an iPod Shuffle, and I don't have an iPod yet, even though my collection of unheard KQED Forum Podcasts is burgeoning. But I have seen and examined several books in the Portraits series. I may buy one someday. After I get an iPod.

Another Arkansas series that I like is "The Civil War in the West." The spring catalog has a promising addition to it: Confederate Guerrilla, The Civil War Memoir of Joseph M. Bailey, edited by T. Lindsay Baker—I tried to link to a description, but their web site is maddeningly difficult to navigate.

And Nebraska Press, well, what can you say? Here's what you can say: their history list, and their Bison Books imprint, are the best. Their catalog is, without fail, chock-full of intriguing new titles in all subject areas. I like their history books so much, I've twice applied for jobs there (just a little bit afraid that I might actually get an interview, since I love California—not that I don't have fond memories of Lincoln, where my big sisters went to college, and where once, the Big Red machine was an unstoppable powerhouse). Bison has the masterfully assembled series, "This Hallowed Ground: Guides to Civil War Battlefields" (Brooks Simpson, Mark Grimsley, and Steven Woodworth, series editors).

It's the perfect series: fresh, attractive, well-written, useful. The Spring/Summer 2007 catalog presents The Peninsula & Seven Days, A Battlefield Guide, by Brian K. Burton. He's not a historian most of us would associate with that campaign, but I trust the editors' judgment.

I see over at Civil Warriors, the Wilson's Creek, Pea Ridge, and Prairie Grove guide is out, and there's no one you would want to put together a guide like that besides Earl J. Hess, Richard W. Hatcher III, William Garrett Piston, and William L. Shea. That's as perfect a marriage as you'll find on any one string of battles in the war.

Also in Nebraska's Spring/Summer catalog: Jeb Stuart and the Confederate Defeat at Gettysburg, by Warren C. Robinson, professor emeritus at Penn State (thank you, Nebraska, for paying someone to build a beautiful, easy-to-use web site). I know nothing about this book, and if it came out under any of a half dozen other imprints, I wouldn't consider for one minute buying a book on this subject—I would just go to the Gettysburg Discussion Group archives and read 30 or 40 month-long threads, searching for entries by Licensed Battlefield Guides like the inimitable Wayne Wachsmuth. But because Nebraska published it, my curiosity is piqued.

Nebraska has also brought out Scott Patchan's Shenandoah Summer: The 1864 Valley Campaign. This looks great, and my interest is colored by having spent a couple days with Scott as tour guide on the battlefields of Manassas (Civil War Forum Reunion in 2005). He was impressive. The catalog gives a quote by Bill Miller, saying that Scott "is a 'boots-on-the-ground' historian, who works not just in the archives but also in the sun and the rain and tall grass. Patchan's mastery of the topography and the battlefields of the Valley is what sets him apart and, together with his deep research, gives his analysis of the campaign an unimpeachable authority."

Now, I know Bill Miller, and he doesn't lie. He might even tell you you look fat in those pants, if you ask him, so don't ask if you don't want to know. He doesn't speak well of bad books. Good enough for me—can't wait to read this one.

I read Scott's manuscript for him and made some editorial suggestions.

Having read it in full, I can tell you that it is, by far, the most comprehensive treatment of those events yet tackled. Scott's done a great job with it.

Good choices...you have good taste! I dislike the way U. of Ark. website works as well. BTW, I didn't see that particular title nor any mention on the site of the spring 2007 catalog there.

I noticed many of the presses have their spring catalogs out. Slim pickings in several.

Your endorsement of the Patchan book is duly noted. Glad to hear you think highly of it.

Have you heard anything about the other Nebraska title I mentioned, the William Robinson book on "Jeb Stuart and the Confederate Defeat at Gettysburg"?

Thanks for the note, Drew. Judging by what you write about on your blog, our interests in Civil War books overlap considerably.

I noticed, too, that Arkansas makes no mention of their Spring 2007 catalog at the website (and forget the search engine -- it's useless). That's very strange. Ordinarily, you would expect information on a press's web site to be ahead of the curve, since it's the best place to tell people about your books (and to sell your books) inbetween printings of the catalog.

I turned down Robinson's book on Jeb Stuart. Had it in just before Eric's and JD Petruzzi's manuscript on the same subject hit my credenza. I won't comment on Robinson's work, but let the market speak for itself. Ted

Good to hear from you. Interesting that you had multiple manuscripts on the same topic, more or less. I was surprised to see Robinson's book, since I'd never heard of it, and Gettysburg books are usually more widely touted.