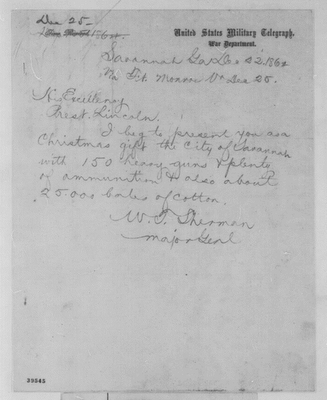 General Sherman to President Lincoln
(Telegram offering Savannah, Georgia as a Christmas present)
—transcription of above—

I beg to present you as a Christmas gift the City of Savannah with 150 heavy guns & plenty of ammunition & also about 25.000 bales of cotton. 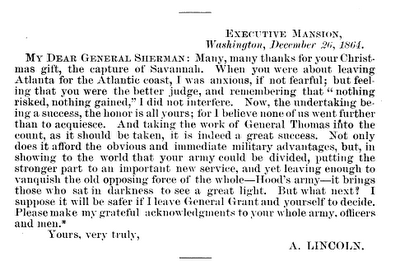 David,
I am very glad you printed Lincoln’s response to the famous Sherman Christmas gift telegram. In it Lincoln gently reminds Sherman of General Thomas’ part in the ‘great success’. Sherman would never really give Thomas the proper credit he deserved for his part in the western battles. Only a few days before the Christmas telegram, before he found out about Thomas’ victory at Nashville, he wrote to Grant, “I know full well that Gen. Thomas is slow in mind and in action..”. General Sherman seemed to be painfully aware that he was promoted over Thomas because of his brown-nosing of Grant ( and also because Grant did not want to leave a real rival behind in the western theatre when he went east). Sherman always tried to put Thomas in a bad light with Grant to help justify Grant’s decision.

Telling indeed. Most authors include only the beginning and end of Lincoln's response as they are wonderfully quotable. I think this is the first time I've actually read the entire telegram.

You're right that Sherman seems to go out of his way to slight Thomas, and Grant & Sherman together appeared to have it in for the man.

Like Drew mentioned, you almost never see the full text of Lincoln's reply, and it is interesting that he makes it a point to include Thomas in Sherman's success.

But I think Sherman's promotions have little to do with "brown-nosing," and everything to do with the fact that Grant and Sherman established a close and trusting relationship from Shiloh through Vicksburg. As often happens, when the big promotion came up, Grant "hired from within."

>everything to do with the fact that Grant and Sherman established a close and trusting relationship from Shiloh through Vicksburg. <

David, I know that is the standard line, but actually they had a very unique synergistic relationship. Grant needed the support of Sherman’s Ohio senator brother, and Sherman always needed long coattails to cling to. It must have been fairly obvious to Grant after Shiloh that Sherman was not much of a fighting general. Can you point out where Sherman ever changed the course of a battle by some act or decision especially once the battle was joined? A measure of Sherman’s lack of tactical skill was his inability to capture Joe Johnston’s army at either Savannah or Bentonville even with overwhelming forces at his disposal. He was a good strategic thinker, but a pretty sorry general overall. Yet Grant picked him to lead in the west. Petty army politics cost thousands of lives, but get no mention in the history books. You historians have a long way to go to get the Civil War story right!