The year 1862 was a remarkably bloody time for the American experiment. 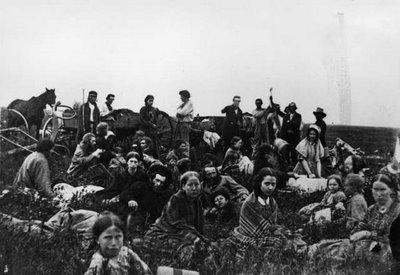 [Photo: "People escaping from the Indian massacre, at dinner on a prairie," Library of Congress, details below]

It's well nigh impossible for people today to conceive of how chaotic and unsettling things must have looked in the 2nd year of the war. All of the enthusiasm for a quick victory, and the anxiety of young men deeply worried that the war would end before they had a chance to participate, was played out and spent in desperate, gory killing fields that had nothing of romance or glory about them.

HIGH TIDE
In April, at Shiloh—to cite an oft-repeated statistic—casualties in the 2-day battle exceeded the combined casualties for Americans in all previous wars (Mexican War, War of 1812, Revolution). In September, casualties at Antietam remain the single highest one-day total in American history. In 1862, the real "high tide" of the Confederacy swelled, and fell back, in all theaters of the war. It was the only year that Confederate armies made major offensive incursions across the board. The Confederate invasion of New Mexico fell short at Glorieta Pass in the Far West; in the Trans-Mississippi, Van Dorn's designs on St. Louis were thwarted at Pea Ridge in the Boston Mountains of NW Arkansas; in the Western Theater, Bragg's movement with the Army of Tennessee surged as far north as Perryville, Kentucky, before the great southward ebb; in the East, Lee's first invasion across the Potomac ended in stalemate at Sharpsburg. Add to all that Jackson's Shenandoah Valley Campaign, the slaughter of the Seven Days on the Peninsula, and another, far-bloodier battle along Bull Run, and surely for many, the erstwhile, gung-ho sense of adventure dissolved into an uneasy feeling of apocalyptic dread.

DARK STAINS
If epic battles weren't enough, the close of 1862 was marked by a series of mass executions, signaling that whatever business was afoot in these disunited states, it was not business as usual. In a span of roughly 10 weeks, between mid-October and the day after Christmas, 1862, at least 60 people were executed—some in summary fashion, the rest after trials of a sort, but none in a way that makes anyone beam with pride today.

Most famous, perhaps, was the execution of 38 Sioux Indians on December 26, in Mankato, Minnesota, in the aftermath of the Sioux uprising there. Lincoln, to his credit, commuted the death sentences of over 250 Sioux, but the mass hanging remains the largest in U.S. history. The "Palmyra Massacre," in Palmyra, Missouri on October 18, was a simple case of murder. On that day, ten Confederate prisoners were ordered shot in an act of cold-blooded retaliation.

Less well known is the Great Hanging at Gainesville, Texas, also in October. There, 40 citizens thought to be overly sympathetic to Union war aims were executed (two others were reportedly shot while attempting to flee). It's a chilling thing to contemplate, and but for the scale, not unlike the internecine bloodshed already well advanced in Kansas, Missouri, East Tennessee, and other places.

Dark chapters, all, and all have been written about with varying degrees of success. For the latter event, most easily accessible is Tainted Breeze, by Richard B. McCaslin.
Lots of things have been written on the Sioux War in Minnesota—I still like an old (1961) booklet by Kenneth Carley, put out by the Minnesota Historical Society.

I'm not sure what might be reliable with respect to the Palmyra killings, though accounts of the event are included in any number of texts on the Trans-Mississippi. One can see the mass grave of the victims here.

[Photo at top by Adrian J. Ebell, created or published August 21, 1862. Library of Congress summary reads, “A Group of men, women, and children rest and eat during their flight from Fort Ridgely, Minnesota during the Native American Sioux uprising. Stephen R. Riggs sits near a woman who stands by a wagon." See image here.]
Posted by dw at 3:34 AM

The Blue&Gray issue Vol. 17 third issue details Porter in NE Missouri and the Palmyra Massacre. It has a fairly recent book-length study as well, but i am drawing a blank on the title and author. I haven't read it so I don't know how evenhanded it is.

Eakin press published a book about the mass hanging of the German-Americans in Texas called DEATH ON THE NUECES: GERMAN TEXANS, TREUE DER UNION by Robert Underwood.

David, wonderful photo. At first I assumed they were captured indians. The pioneers had it rough.

I had forgotten about the Blue & Gray coverage -- I have that issue around here somewhere.

We forget just how much those states of the Old Northwest were on the frontier in 1860 (likewise, with places like West Texas, where the Cheyenne punished outlying settlements upon the withdrawal of troopers).

My great-great-grandfather and his family were on the Minnesota frontier during the Sioux uprising, and we're fortunate to have some diary and letter references to this event, and the need to seek refuge at a fort. I have wondered if one of the bedraggled refugees in the photo might be an ancestor.

>>(likewise, with places like West Texas, where the Cheyenne punished outlying settlements upon the withdrawal of troopers).<<

Are you sure that was Cheyenne and not Comanche?

Yes, of course you're right -- that would be the Commanche.