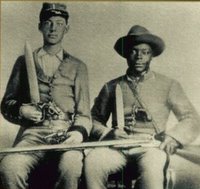 Saw mention of this article over at Kevin Levin's Civil War Memory site — perfect fodder for examining the "memory" of that defining era in American history. Claude Turberville, quoted in The Mississippi Press, is a reenactor, which is to say he engages in "combat karaoke" (a phrase I first saw used by, I think, Prof. Wolfgang Hochbruck).


These days I'm more or less desensitized to assertions, like that attributed to Turberville, that "many people believe the Civil War was fought over slavery. It was not. It was initially about states' rights and taxes." This kind of thing is not going away, no matter what. It's an article of faith in some quarters, like the idea that you'll catch a cold if you go outside with wet hair in winter. It's easy to see the connections. People who go outside with wet hair do frequently catch a cold — albeit from rhinoviruses unrelated to hair. And the Civil War was about state rights — specifically the "right" to perpetuate slavery and to expand it into the vast territories of the growing nation before free soilers got the upper hand to an extent that could never be overcome.


One can make a coherent proposition that places the concept of state rights at the core of the sectional rift. It has to be phrased carefully, and not overreach, lest it expose the unavoidable underpinning that is slavery — not everyone has the stomach for The Apostles of Disunion, or Alexander Stephens's "Cornerstone Speech." But one can at least build an argument about state rights without making things up out of whole cloth. An argument can be offered that allows one to retain a modicum of dignity, and to avoid sounding like a Borg drone parroting a neo-Confederate bible.


But this business about "black Confederates" drives me nuts. As Turberville tells it, "Black soldiers fought alongside white soldiers in the Confederate Army." Sigh. Now, most everyone with a passing interest in the subject of black men under arms for the Confederacy — everyone who's ever argued the point — is well-acquainted with the documentary evidence and anecdotes alike: the pensions, the body servants who picked up a gun, the slaves who rode with Forrest, the teamsters in Lee's retreat from Gettysburg. We've read Richard Rollins's expositions on familial bonds between black and white Southerners, and Art Bergeron's solid accounts of some individuals from Louisiana. We know about the short-lived Native Guard in New Orleans, the phantom black regiment on the Peninsula, the illusive black cannoneers at First Manassas. Likewise, we know about the abortive attempts to field black CS regiments in the waning days of the war. We've seen Walter Williams's column, and the numbers attributed to Dr. Smith of American University. And yes, we realize Williams and Smith are African Americans — that qualification is always included, as if it somehow obviated the need for actual substantiation.


When we lay all the evidence out neatly, and scrutinize it closely, there is one incontrovertible fact that cannot be denied: except in the rarest of instances, black soldiers did not fight alongside white soldiers in the Confederate Army. As a matter of fact, blacks were not allowed in the ranks of Southern armies. That's why, when it did occur, the occurrence was isolated and exceptional. What blacks did do was flee to the protection of Union arms by the 100s of thousands (is that part of Turberville's classroom presentation?). Some 180,000 of them donned Union uniforms and fought against Confederate armies. The idea that blacks in any significant numbers fought in CS armies is a myth designed to disassociate slavery from secession and war. It is an enduring tenet for latter-day proponents of the Lost Cause apologia launched long ago by folks like Edward Pollard, and Jubal Early.

Notice how, in Turberville's telling (or at least in the way he was quoted), it's an important distinction that blacks were segregated in Union armies, but fought side-by-side with whites in Confederate forces. Lost Cause apologists and neo-Confederate fictioneers invariably seek to seal the deal by highlighting racism in the North, as if the near-universal conviction of white supremacy among white Americans of that time had some bearing on the question. Slaves and free blacks fighting for the Confederacy is an extension of the ultimate irony, in keeping with secessionist Fire-eater rationalizations that theirs was a fight for "liberty" (the liberty to enslave others).

And yes, I think I did just make up the word "fictioneer." I kind of like it. I hope it's original.

Let us all humble ourselves. We don't have to make stuff up to honor our ancestors' memories, or to enjoy studying the past (though of course, we do — I don't know why Lost Cause mythology troubles me more than tried and true myths from the American Revolution, or other staples). Still, we don't need to pretend that Lincoln thought blacks were the equal of whites. He didn't. We don't have to pretend the war was one glorious effort at emancipation from start to finish. It wasn't. And likewise, there's no sense in pretending that the future of slavery wasn't the very crux of the sectional conflict — the issue that required difficult compromises between free soil and slave soil to forestall hostilities for decades, the issue, more than any other, that ultimately precipitated secession, and war. Because it was. That's what the historical record tells us. It's what the architects of secession themselves tell us.


If it were only Mr. Turberville and his weekend warriors validating each other's beliefs around a friendly campfire, where's the harm? Or testing their positions against the beliefs of other adults in various forums — who could complain? But going into elementary schools and dressing up fraudulent declarations as the considered conclusions of honest research, that's something else. I'm guessing that when the gentleman in question talks to school groups, and tells them about the mythological integrated armies of the South, he stops short of telling them that as late as 1864 — 1864! — General Patrick Cleburne was nearly run out of the Confederacy on a rail for daring to suggest the South begin enlisting slaves into the army in return for emancipation. I'm confident that Mr. Turberville neglects to tell the children that when the Confederacy had its back to the wall before the spring campaigns of '64, the CS leadership would not consider for a moment giving up slavery to gain the one ingredient it most needed to ensure independence: manpower. Without slavery, what was the point of independence?

You can be assured that, standing before impressionable school children — where his uniform imbues him, in the eyes of the kids, with the authority of someone who knows what he's talking about — Turberville stops short of quoting Confederate Congressman Robert Toombs, who denounced efforts to create slave regiments even with the CSA in its death throes, worrying that if blacks could be soldiers "our whole theory of slavery is wrong."

Again, if it were just Turberville, his buddies and their families, regaling each other with tales of black Confederates, I'd say, "knock yourselves out." But unfortunately, thanks to his casually inane myth-making in classrooms of young children, there will always be new standard bearers to step up and take his place whenever the Lost Cause flame starts to flicker.
Posted by dw at 12:13 AM

Morning. Owww, you heretic, presenting facts......why why you must be unAmerican.....big grin. I have been posting similar summations when i could. Not ONE of the Southron supporters can answer the Gen Patrick CLEBURNE question: If there were so many black confederate SOLDIERS, why did he even SUGGEST it???? All he would have had to do was request a bucket full and have them in his ranks. As an additional point, there was almost VIOLENT opposition to such an idea in the CSA Congress. Several members stated they would walk out if such a measure was passed. What the Southron supporters don't want to agree to or refuse to accept is the basic premise of a SOLDIER: You MUST be SWORN in by taking an oath of allegiance by the ELECTED GOVERNMENT. Oh well, trying to modify the historical record to suit ones point of view is always interesting. What annoys me the most is the amount of time that it takes to REFUTE these hare-brained ideas.... regards dave

Thanks for the feedback. You're right -- if *nothing* else, the notion of legions of black Confederates defies logic. Why was Cleburne's proposal considered so radical, and controversial, if the thing he proposed was already commonplace?

But this nonsense is not going away. Have you ever noticed how the Letters to the Editor section of "The Civil War News" today looks like recycled letters from CWN 10 years ago (arguments over black Confederates and slavery vs. states rights)?