On the naming of the U.S.S. Kearsarge 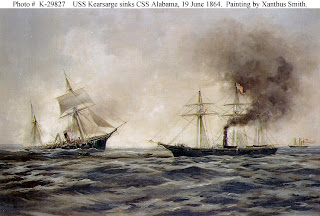 Who came up with the name of the USS Kearsarge, and which New Hampshire mountain does it honor? This is another of those enduring Mysteries of History (the fact that few people today know the matter was ever in question, and even fewer people care about a resolution notwithstanding). I had read about the controversy, but it held no particular interest for me. That is, at least, it didn't until I discovered that a distant relative of mine arguably deserves the credit. Now I'm ready to defend the honor of that remote cousin, and to denigrate the pretenders who would elbow in on my family's glory. 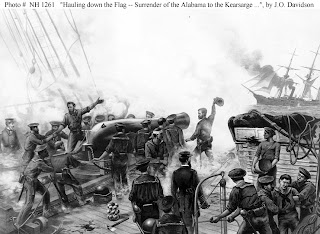 There have been four United States naval vessels named the Kearsarge. Civil War and history buffs, upon hearing the name, will picture the original sloop of War, launched in 1861, which did battle with the infamous Confederate vessel, CSS Alabama, and sent the raider to the bottom of the sea. Interestingly, while the Kearsarges in the U.S. Navy were named for a mountain in New Hampshire, there is a mountain in California named by miners for the Civil War-era sloop itself, commemorating the victory over the Alabama. The naming of the California mountain soon prompted Confederate-sympathizing miners to name a range of Sierra foothills the Alabama Hills (most famous as the backdrop for television and movie westerns). So what we have is a mountain giving its name to a ship, which in turn gave its name to another mountain, which inspired the naming of a range of hills for yet another ship. 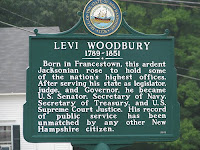 A strong case can be made that the name Kearsarge was suggested by the wife of Assistant Secretary of the Navy Gustavus Fox, Virginia Woodbury Fox, daughter of the supreme over-achiever in my family tree, Levi Woodbury [I wanted to include a photo of Virginia here, but am having trouble locating one]. Levi was, like me, descended from our first ancestor in this country, John Woodbury -- one of the original “Old Planters” of Beverly, Massachusetts -- though my line comes off of one son and Levi’s another. Unlike me, Levi served as a governor (New Hampshire), a senator (New Hampshire), as Secretary of the Navy under Andrew Jackson, as Secretary of the Treasury under two presidents, and as a justice of the United States Supreme Court (nominated by James K. Polk). He tried twice to win the Democratic Party nomination for president, and fell short. My only elective office was a two-or-so year stint as president of a local Civil War Round Table.

My recent Civil War-related revelation was that two of Levi Woodbury's daughters were neck deep in Washington political families during the administration of Abraham Lincoln. As mentioned, Virginia was married to Gustavus Fox, described as the de facto chief of naval operations and a major proponent of ironclad technology. Virginia's sister Mary Elizabeth Woodbury was wed to Montgomery Blair, Lincoln’s Postmaster General and brother of Major General Frank Blair. Mary Elizabeth’s father-in-law was Francis Preston Blair, a political juggernaut who founded Silver Spring, Maryland and the man who arranged the Hampton Roads Peace Conference.
According to Secretary of the Navy Gideon Welles, Virginia Fox Woodbury, a native of New Hampshire, recommended that one of the navy's new warships bear the name of a well known mountain in her home state's Carroll County. Turns out there were two mountains in the state bearing roughly the same Abenaki Indian name, with various spellings, and controversy ensued when a newspaperman in Concord—Mr. Henry McFarland—insisted that the idea for naming the ship was his, and that it was in honor of a smaller Merrimack County peak. McFarland claimed to have made the suggestion in a letter to Secretary Welles, who subsequently disavowed any knowledge of the missive and said he recalled speaking only to Assistant Secretary Fox about the matter.

William Marvel addresses the naming controversy in Appendix 1 of his book, The Alabama and the Kearsarge, the Sailor’s Civil War. When, in 1875, McFarland endeavored to refresh Welles’s memory and gain corroboration for his claim, Welles told him it would be “meet and gallant to commemorate” the Carroll County mountain “in accordance with the suggestions of a lady.”
Nothing doing, said McFarland. The credit-seeking newspaperman soon recruited the president of the state historical society, Nathaniel Bouton, who was also a state legislator, and an effort was launched to change the name of the Carroll County mountain.
William Marvel adds, “Gustavus Fox spared no expense in defense of his late wife’s claim. He hired researchers in London to examine colonial maps, engaged a Catholic priest who was fluent in the Abenaki dialect to demonstrate how the two mountains could have derived the same name from different Indian words, and he interviewed dozens of Carroll County residents who had never known their mountain as anything but Kearsarge, including one who had been born there early in the Revolution.”
Fox presented his assembled evidence to a three-person historical society committee, assembled by Bouton, which summarily rejected his argument and officially called for giving a new name to the Carroll County eminence -- “Mount Pequawket.” McFarland rejoiced in the decision. Years later he endeavored to seal his claim by publishing a book relating his version of the naming of the U.S.S. Kearsarge.
The sheer weight and breadth of McFarland’s crusade to claim credit appeared to have ended the matter, particularly as all of the principals in the naming controversy passed away (Fox and Welles were gone by the time Fox mounted a victory lap with the publication of his “proof”).
The story doesn’t end there, however. Late in the game an elderly Baptist minister. Joseph Gilmore, trumpeted his claim to have named the Kearsarge. His father was the governor of New Hampshire at the time, he said, and when the Navy Department requested some New Hampshire Indian names for the christening of new vessels, the governor assigned the task to his boy. The minister, it turns out, was either feeble-minded, or a liar. Writes Marvel, “Reverend Gilmore’s reputation as a theologian appears to have prevented anyone from pointing out that his father did not take office as governor until 1863 – two years after the Kearsarge was first named.
Fifty years after the end of the Civil War, the U.S. Geographic Board resolved to settle the confusion over the names of the respective New Hampshire mountains. Siding with the preponderance of McFarland’s spurious “evidence,” the Board concluded that Fox’s mountain should be called Pequawket, reserving the name “Kearsarge” solely for McFarland’s Merrimack County peak. Locals ignored the pronouncement – they had always known the mountain by one name and it was going to take more than the proceedings of an obscure government board to change that.
Finally, in 1958, after 43 years of residents refusing to abide by the Geographic Board’s decision, the government changed its mind and sought a compromise, assigning the name “Kearsarge North” to the peak. Needless to say, the locals still simply called it Kearsarge.
Marvel is careful to point out that all of the machinations of McFarland, and the government’s decision to determine the proper designations of the two mountains, tell us nothing about which of the two mountains gave the U.S.S. Kearsarge her name. It was enough to establish that, at the time the warship was christened, Kearsarge North/Pequawket was known to Virginia Fox and others as Kearsarge.
That just leaves the question of who suggested the name to the Navy. Marvel nails it. “The only credible candidates are Henry McFarland and Mrs. Fox. The only evidence that McFarland thought of the name is his own insistence on it . . . . [and his claim to have sent a letter to Welles. Later, in his booklet, he claimed to have sent the letter to Fox, intimating that the assistant secretary stole the idea on behalf of his wife.] Whether or not McFarland submitted such a letter, Mrs. Fox had the better opportunity to influence the secretary of the navy, who could not remember talking about it with anyone but her husband.”

As intriguing as the idea is to me that a relative gave the name to the famous warship, doubly intriguing to me is the likelihood that a relative was a crewman on the Kearsarge during the duel with the Alabama. There was a John C. Woodbury from Massachusetts aboard, and Massachusetts is where it all started for Woodburys in this country -- at Salem, and Beverly, and Cape Ann where they went down to the see in ships. More on that later, if I can connect the lines.
Left: John C. Woodbury, detail from a photo in Marvel's book, page 145, showing the sailor at a reunion of Kearsarge survivors in 1915.