Grant, Sherman, and Sheridan slept here. Joe Hooker and Kit Carson too. . . my kids are unimpressed

The operative phrase is, "according to local tradition."
But it could have happened.


After a tremendous Thanksgiving meal and visit with my brother and his family in Glen Ellen (Jack London country), on the way home we decided to take the boys downtown to the Sonoma plaza, one of the true holy lands in the landscape of California history.

We have three sons spread out over a number of years, and it dawned on me that in the lifetime of our three boys, when visiting my brother we have routinely skirted Sonoma proper in favor of more direct and less congested routes. Even the 19- and 15-year-old would have been too young to remember those occasions when we used to walk around the town square. What a grand opportunity to expose the young'uns to some essential Golden State historic sites. All of our kids, when they passed through 4th grade, participated in the requisite study of the California missions (reportedly, and I believe it, there is an underground market for foam-core models of Spanish missions well supported by 4th grade parents), and here in Sonoma, on the plaza, is the northern-most of all the Californian missions. Not only that, but other historic structures abound, like the barracks, and look over there—a monument commemorating the Bear Flag Revolt which happened right on this spot!

First rule, and I should have known better, don't go down to the town square in Sonoma (or any place in the Wine Country, or any other popular destination in California) on a day when nearly everyone is off work, like weekends or holidays. It's crowded, and the road infrastructure doesn't support the volume. Second rule, don't ever think that your kids will even remotely share your interests in history. Don't think they will shiver in awe at the significance of some patch of grass or pasture, or look in wonder on what today, you have to admit, is just a ratty old shed that preservationists—through herculean efforts and much expense—managed to keep from falling down. When we got to the plaza, the two younger boys insisted on "waiting in the car" while we older trio took a stroll. Third rule, don't even try to force them to come with you, because their clinical lethargy, their superhuman disinterest, and their involuntary robo-chants of "can we go now" will detract from your own very real pleasure. No, just crack the windows and say "see you in a bit."

Review: Voices of the American West 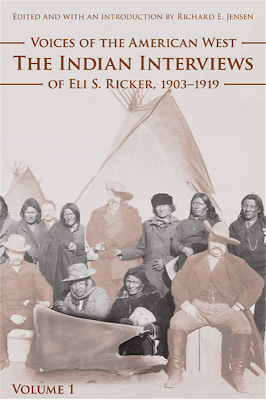 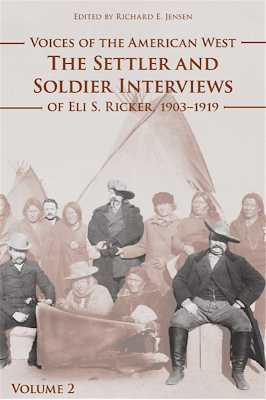 Eli Ricker, a Civil War veteran who marched with Sherman, tried his hand at a number of occupations after the war, including lawyer, judge, and newspaperman. He came to live in Chadron, Nebraska, in 1885, not far from Fort Robinson, where Crazy Horse had been killed just eight years earlier. Chadron was also in close proximity to the battlefields and reservations of western South Dakota, and it was at Chadron around the turn of the century that Ricker began conducting interviews, compiling notes, and doing research on the rapidly changing “Old West.” His intention was to write a book he called, “The Final Conflict Between the Red Men and the Palefaces,” but a quarter century later he was still gathering material.

As early as 1903, Ricker, who spent two full winters on the Pine Ridge Reservation -- began writing down eyewitness accounts about what transpired at Wounded Knee both from the 7th Cavalry perspective as well as from survivors of Big Foot’s Lakota Band. Ricker was sympathetic to the plight of Indians at a time when white Americans nearly universally regarded them as savages. Indeed, he advanced the radical proposition that Indian historical testimony was as valuable and legitimate as that of the white man.  One of Ricker’s notes, quoted in the Introduction, gives a sense of his enlightened sensibilities: “The Indians sneer at the whiteman’s conventional reference to the Custer massacre and the Battle of Wounded Knee. They ridicule the lack of impartiality of the whites in speaking of the two events – when the whites got the worst of it it was a massacre; when the Indians got the worst of it it was a battle.”

Alas, Ricker’s long-researched book never materialized. A stint at the U.S. Office of Indian Affairs in Washington, D.C. allowed him to fortify his research, but also served to overwhelm him with the amount of Indian resources demanding his attention. Already past the age of 60 when he began the project, Ricker died before he could complete more than some sections of a rough draft.

Ricker left behind stacks of tablets containing transcriptions of his interviews -- a treasure trove of unique and invaluable oral histories. Happily, after selling much of his collection, including his library, Ricker’s family donated the precious tablets to the Nebraska State Historical Society, where they were received on November 2, 1926. The collection remained relatively obscure for decades, though some Western historians like Robert Utley have accessed it in support of their own studies (Nebraskan Mari Sandoz cataloged and collated the interviews, and incorporated some of the material in her writings as well).

Finally, the 2005 publication in two volumes of Voices of the American West has made Ricker’s painstaking work readily available to scholars and history buffs alike (being reviewed here are the 2012 paperback releases of both volumes). Editor Richard Jensen has done an expert job organizing the Ricker material, intuitively devoting one volume to Indian interviews, and the other to Settlers and Soldiers. Within each volume, interviews are grouped together into major subject areas. Volume one includes chapters on The Garnett and Wells Interviews, The Ghost Dance and Wounded Knee, and The Old West – Indians and Indian Fights. Volume two chapters include: Wounded Knee, Little Bighorn, Beecher Island, Lightning Creek Incident, Biographical Sketches, and The Old West.

Though there is a heavy emphasis on military affairs in the interviews, they also present perspectives on a broad range of other aspects of the Old West, from life on the reservations to the fur trade. Fully 200 pages of volume one are devoted to interviews with William Garnett and Philip F. Wells, mixed-blood men who spent decades as Lakota interpreters. Garnett and Wells, in addition to discussing warfare, offer insights on treaties, Sun Dances, Sioux customs, religion, and languages. Garnett, sometimes called Billy Hunter, is reported to be the son of Confederate General Richard B. Garnett, who died in Longstreet’s assault at Gettysburg. While stationed at Fort Laramie before the war, Garnett took an Oglala woman, named Looks at Him, as his common-law wife, resulting in the birth of William.

Maps, illustrations, useful appendixes and an exceedingly generous index enhance the text, and Jensen’s voluminous endnotes not only demonstrate his utter mastery of the subject matter (Jensen was a senior research anthropologist at the Nebraska State Historical Society), but render the oral histories exponentially more useful and interesting.

Bison Books, the trade paperback line of the University of Nebraska Press, has consistently released some of the most fascinating and valuable works of American history.  Voices of the American West is another brilliant offering in a catalog of over 900 in-print titles spanning more than 50 years.

150 years ago -- the Gettysburg Address

One of only five known copies of the Gettysburg Address written in Lincoln's hand, this one resides at the Cornell University Library. Lincoln sent it to historian George Bancroft for inclusion in a special publication intended to provide assistance to soldiers. 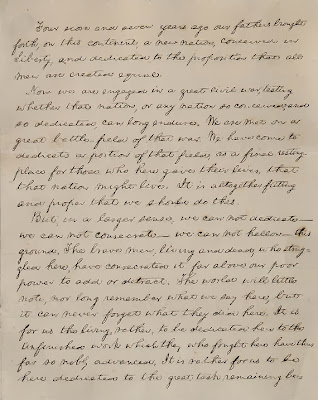 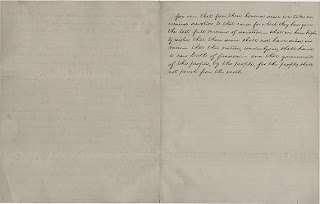 We pass over the silly remarks of the president

In the editorial about President Abraham Lincoln’s speech delivered Nov. 19, 1863, in Gettysburg, the Patriot & Union failed to recognize its momentous importance, timeless eloquence, and lasting significance. The Patriot-News regrets the error. 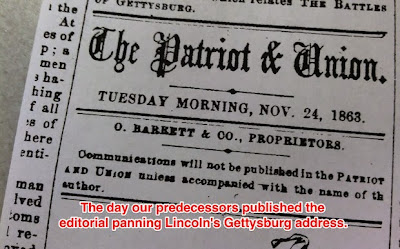