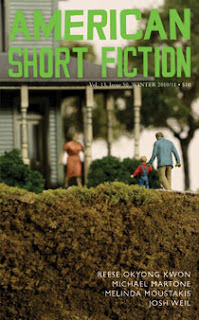 I just finished reading a pretty amazing short work of fiction called, "Solarium: A novella," by Josh Weil. It was published in the journal, "American Short Fiction," vol. 13, issue 50 (Winter 2010/11). I had subscribed to the journal because the previous issue featured a short story by a friend of mine (great job, Rob!), and because I was curious what this resurrected literary journal was doing these days.

I was surprised to find a story set during the Civil War—"Solarium" takes place on a Virginia plantation in 1865, beginning some time before Richmond falls and continuing beyond. But I was really surprised that the author boldly told the tale in the first-person vernacular of mid-19th century master and slave. Generally speaking, I'm of the opinion that if your name is not William Faulkner, the practice should be avoided, but author Josh Weil did an admirable job. So I will modify my recommendation to say don't do it unless you're good enough to pull it off. Seriously, who are you trying to kid?

The story is told in six overlapping narratives—each headlined simply by the narrator's  name (As I Lay Dying)—mainly giving alternating perspectives from a cotton farmer and certain of his slaves. I so want Civil War historical fiction to be as engaging and powerful as the material itself, and I am so regularly disappointed, that I started reading this novella with trepidation.

But I was soon caught up in the strange story centered on the discovery one day of an errant hot air balloon that lands on the farm. Weil skillfully gives us characters to care about (which is to say believable and compelling), and builds an ever-rising tension about the coming of the end for some, and the promise of a new beginning for others.

It's hard to review a 90-page story without giving away elements that would otherwise contribute to the reader's pleasure of discovery, but suffice it to say I found it impressive in its construction, unpredictable, and exciting. What more do you want from historical fiction, other than a reasonable faithfulness to accuracy? It has that, too.

One of the best things you can say about a work of art is that it causes you to reflect on it long after you've moved on. I've been thinking a lot about "Solarium," puzzling out some things I moved over too quickly, suddenly recognizing a larger image that I was too close to discern while reading, or replaying in my head a powerful scene, as if I had seen it acted out. Damn it, I'm going to have to read it again, and life is already too short to read all the books I own once.

I had never heard of Josh Weil, but his biography in the journal indicates he's off to a good start—many prizes and many prestigious fellowships. His 2010 triptych of novellas, The New Valley, is described in some detail on Amazon.

You can read "Solarium" by buying the current issue of "American Short Fiction" at the publisher's website—"Solarium" and three other short stories—for five bucks. Unless I'm mistaken.
Posted by dw at 2:18 AM

Just stumbled upon this, and was touched. Thanks for reading my novella. I'm glad it hit you right. And I'm grateful to you for writing about it here. Thanks. - Josh

Good to hear from you. I was so pleased to discover your novella and look forward to reading some of your other work.