Melancholy, Scot and Robin, The Who, President's Wall, Brave Ulysses 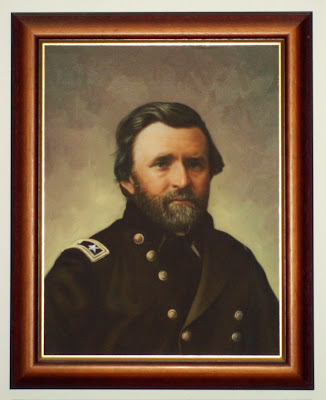 MELANCHOLY
This is the painting that hangs over my computer (my poor digital photograph does not do it justice). I enjoy staring at in it from time to time as I withdraw from the keyboard, sit back, and take a breath. There's something mesmerizing about Grant's countenance. Images of him are weighty, with a wisp of melancholy that is always felt, if not intended.

SCOT & ROBIN
This is a rare, one-of-a kind portrait. It was painted by a street artist in South Korea—commissioned by my good friend Scot Halpin and his wife Robin. Scot handed the man a small photograph of Grant, and returned a couple days later to pick up this stunning painting. Scot, who passed away about a year and a half ago, was an important person in my life, and his untimely death makes the Grant painting all the more cherished. Scot was not a Civil War buff, but he knew about my interest and surprised me with this gift. I have other reminders of Scot—including a few of his own paintings—but the Grant portrait speaks to me every day. Usually, it's very polite, but sometimes it's sarcastic.

I will dedicate another bit of writing to Scot, as this may not be the best venue, but suffice it to say he—more than anyone in my life other than Jerry, my eternal Berkeley Writers Club compatriot—and Robin—inspired me to never give up the dream that artist's dream from a young age, and which the world and life conspire to squelch every day in every way. He, more than anyone I have known before or since, lived the life, and walked the walk—making his way in this world as an artist, a musician, a free thinker. He, more than anyone, served to remind that creating art will always matter more than the reasons we all come up with to put it off, or let it go. What I've been putting off, among other things, is writing. But I've not let go, and am excited more about it now than ever.

Robin has begun an ambitious and fantastically beautiful project to post one of Scot's paintings, and a piece of his musical legacy, more or less every day for a year. See her tribute site here.

THE WHO
Robin's blog was highlighted at The Who's official web site, where the band expressed their condolences, and recounted the night in 1973 when then 19-year-old Scot Halpin was recruited from the crowd at the Cow Palace in San Francisco to finish the set for a passed-out Keith Moon. Scot was Rolling Stone's "Pick-Up Player of the Year." You can see video of Scot's great Who adventure on YouTube. TimesOnline published this obit. Scot's 15 minutes of fame. 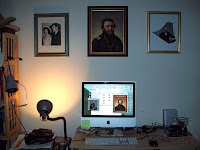 PRESIDENTS' WALL
I'm not a collector of presidential portraits—or at least, I didn't set out to be—the Kennedy photo (left of Grant) was something I glommed onto when my parents died, and is inscribed to my father. The Lincoln photo (right of Grant) is a print of that beautiful glass negative fragment. The Production Director gave that to me after it was used on the cover of a Stanford University Press catalog. We had these images scattered around the house, and it was my wife's idea to collect them together on one wall. Now I love to scrutinize them in quiet moments (with my kids, that means the middle of the night)—they are inspirational figures all.

GRANT
I'm no Grant groupie, and it would never occur to me to take an ad out in the Civil War News to attack Grant detractors, but I'll say unabashedly that he is the Civil War-era figure that I have always gravitated toward in my reading, and that I never tire of studying. Some of my long-time Civil War correspondents will see this as validation of a certain bias, and it's true I believe he was the preeminent general in a war well-stocked with intriguing and successful officers.

He was a small, unassuming man (hmmm, just like me). A failed farmer, an officer who had given up on a military career. By 1854, having risen to the rank of captain, he resigned from the army—a dead end road—and went to work as a clerk in his father's leather shop. In other words, he was pretty ordinary.

When the war started, he struggled to get a commission, finally getting command of a regiment as colonel of the 21st Illinois in 1861. In relatively short order, he was commanding armies. By the end of 1863 he was promoted to Lieutenant General, the first to hold that rank since George Washington, and placed in charge of all United States forces. By 1868 he had completed the transition from anonymous small town store clerk to President of the United States (but he was not the shortest president—in your face, Madison!)

I'm inspired by Grant's calm demeanor, which sometimes showed cracks, to the point of weeping (hmm, just like me!), and his seemingly unambitious rise to the top. He was an enigma to many, a man who gave few hints of potential greatness, then achieved spectacular things. I love that he wore "the uniform of a private with the straps of a lieutenant-general," rather than the full regalia to which he was entitled. To me, that captures a quintessential American spirit, one that disdains ostentatiousness, even in a regimented military culture. He was a brilliant warrior, and a kind and gracious victor. And he left us the best memoirs of any officer on either side of the Civil War.

I've looked at a lot of Grant photographs, and am confident that this is the one from which the South Korean artist created such a beautiful painting. It's nearly the only Grant image I can find where he seems to be looking directly at the camera. The buttons, the ear, the tufts of hair sticking out, the precise pattern of the white underneath the chin and on the collar, the just visible star on the top of the shoulder strap—all seem to be spot on. 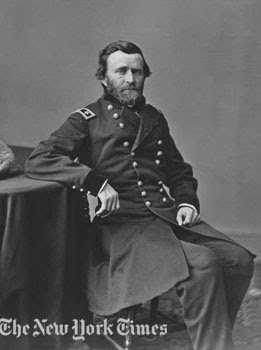 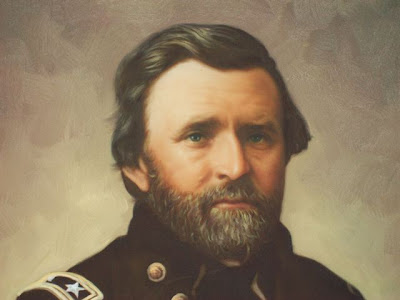 Thanks anonymous South Korean painter.
Thanks Ulysses. And thank you, Scot.
Posted by dw at 3:08 AM

We are about to contract a book on Grant that is quite unique. It is an examination of how the public's perception of Grant has come largely from his own pen (his memoirs), and that scholars have shaped that image by relying on his memoirs in a wide variety of matters (especially with regard to how history has come to view some of his subordinates). According to this author, however, Grant's memoir does not always square with other writings (reports, journals, newspaper accounts, et.al.), which scholars often ignore.

I posted the second part of the cave adventure on my blog: www.savasbeatie.blogspot.com. Check it out and take Atticus.

Enjoyed this post. I share your admiration of Grant. Because Grant affected so many lives, so many issues, and the course of American and world history one can easily spend a lifetime studying him.

I would point out that Grant did not go directly from being a Captain in the Army to being a clerk in his father's leather goods store. He returned to Missouri where he lived for over five years at White Haven, his father-in-law's plantation, trying to make a living as a farmer.

Also, I would be interested in the book mentioned by TPS, but I am skeptical of the premise. First, Grant's Memoirs do not cover his Presidency which had profound influence on public perceptions of him. Also, I'm not sure how perceptions of Grant as a drunk, a butcher, a sphinx, or a failure (all common) could come from his memoirs.

By the way, did you ever find out anything more about Grant's visit to your local suffragette?

I like this "six degrees of separation"-style post, drawing together an artist, a Civil War fan (and one-off drummer), a rock band, and a warrior.

While reading it, another degree occured to me: one of the bonus tracks on The Who Sell Out
(originally releaseed in 1967) was..."Melancholia."

Thanks for the comment. Yes, there was a farming interlude between the army and the Galena sojourn. That would have been the period in which he emancipated the only slave he was known to have owned (distinct from the Dent slaves), William.

I have not confirmed anything more about Grant's visit to the SF Bay Area, though Brooks Simpson confirmed your suspicions -- Grant's post-presidency itinerary up until he left for Europe did not allow time for a trans-continental visit.

That, coupled with the confirmation I found about his one-day sidetrip from SF to San Jose on the later California trip, satisfies me that if he visited Sarah Wallis, it was after he returned from Europe.

Thanks for the note, and the "Melancholia" reference. Nicely done.

Congratulations. YOur blog has been nominated for a 2009 BBAW Award. If you would please email me your email address, I'll send you a note about it.