"You might as well appeal against the thunder-storm as against these terrible hardships of war." 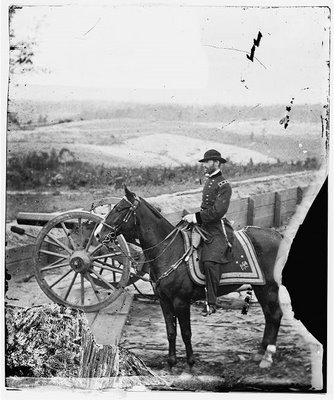 — Sherman to the mayor of Atlanta

In July of 1864, W. T. Sherman's blue columns, after flanking Joe Johnston out of one position, then another, from Chattanooga to the outskirts of Georgia's largest city (with a few futile head-on assaults thrown in for good measure—Pickett's Mill, Kennesaw), joined a series of battles in and around Atlanta.

John Bell Hood—the "gallant Hood"—took over for Joe Johnston, and fulfilled Richmond's expectations within days by striking the Federal armies. Hood aimed to hit the Army of the Cumberland—Sherman's largest—while it was engaged in crossing Peachtree Creek, but too many Federals had crossed before Hood's men were in place, enough to quash Hood's hopes in the July 20 battle.

The Battle of Atlanta (July 22), and Sherman's movement west and south—with more fighting at Ezra Church and Utoy Creek—stretched Hood to the breaking point. Finally, the August 31-September 1st fighting at Jonesboro sealed the deal, cutting off the last rail lines into Atlanta and rendering Hood's position untenable.

Six days later, Sherman initiated one of the most interesting exchanges between two opposing generals, I like to think, in the annals of military history. I do wonder how many instances there are in history of two army commanders, in discussing the disposition of a civilian populace, take the time and trouble to argue the reasons for the war itself. The correspondence between Sherman and Hood starts polite, and becomes increasingly acerbic, reminiscent of some internet message board arguments today, where barely masked disdain flares up into a a series of bitter accusations, before both sides, satisfied with their own impenetrable righteousness, agree to disagree and move along. 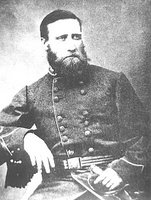 It's worth taking a few minutes to read the Sherman/Hood messages (and that with the city officials who appeal to Sherman to rethink his orders). This site has gathered them into a clean, chronological read, and of course, they can be read at any of the sites that give access to the Official Records, such as Cornell's wonderful Making of America venue.

Originally I posted this correspondence as a combination of paraphrasing, and highlighting some of the great lines (e.g., Sherman's "Talk thus to the marines, but not to me, who have seen these things..."), but it looked silly to me upon re-reading. So I've included the complete exchanges, minus Sherman's note to Halleck, defending his decision to force the evacuation of Atlanta.

The residue of your letter is rather discussion. It opens a wide field for the discussion of questions which I do not feel are committed to me. I am only a general of one of the armies of the Confederate States, charged with military operations in the field, under the direction of my superior officers, and I am not called upon to discuss with you the causes of the present war, or the political questions which led to or resulted from it. These grave and important questions have been committed to far abler hands than mine, and I shall only refer to them so far as to repel any unjust conclusion which might be drawn from my silence. You charge my country with "daring and badgering you to battle." The truth is, we sent commissioners to you respectfully offering a peaceful separation before the first gun was fired on either side. You say we insulted your flag. The truth is we fired upon it and those who fought under it when you came to our doors upon the mission of subjugation. You say we seized upon your forts and arsenals and made prisoners of the garrisons sent to protect us against negroes and Indians. The truth is, we, by force of arms, drove out insolent intruders, and took possession of our own forts and arsenals to resist your claims to dominion over masters, slaves, and Indians, all of whom are to this day, with a unanimity unexampled in the history of the world, warring against your attempts to become their masters. You say that we tried to force Missouri and Kentucky into rebellion in spite of themselves. The truth is my Government, from the beginning of this struggle to this hour, has again and again offered, before the whole world to leave it to the unbiased will of these States and all others to determine for themselves whether they will cast their destiny with your Government or ours? and your Government has resisted this fundamental principle of free institutions with the bayonet, and labors daily by force and fraud to fasten its hateful tyranny upon the unfortunate freemen of these States. You say we falsified the vote of Louisiana. The truth is, Louisiana not only separated herself from your Government by nearly a unanimous vote of her people, but has vindicated the act upon every battle-field from Gettysburg to the Sabine, and has exhibited an heroic devotion to her decision which challenges the admiration and respect of every man capable of feeling sympathy for the oppressed or admiration for heroic valor. You say that we turned loose pirates to plunder your unarmed ships. The truth is, when you robbed us of our part of the navy, we built and bought a few vessels, hoisted the flag of our country, and swept the seas, in defiance of your navy, around the whole circumference of the globe. You say we have expelled Union families by thousands. The truth is not a single family has been expelled from the Confederate States, that I am aware of, but, on the contrary, the moderation of our Government toward traitors has been a fruitful theme of denunciation by its enemies and many well-meaning friends of our cause. You say my Government, by acts of Congress, has "confiscated all debts due Northern men for goods sold and delivered." The truth is our Congress gave due and ample time to your merchants and traders to depart from our shores with their ships, goods, and effects, and only sequestrated the property of our enemies in retaliation for their acts, declaring us traitors and confiscating our property wherever their power extended, either in their country or our own. Such are your accusations, and such are the facts known of all men to be true.

You order into exile the whole population of a city, drive men, women, and children from their homes at the point of the bayonet, under the plea that it is to the interest of your Government, and on the claim that it is an act of "kindness to these families of Atlanta." Butler only banished from New Orleans the registered enemies of his Government, and acknowledged that he did it as a punishment. You issue a sweeping edict covering all the inhabitants of a city and add insult to the injury heaped upon the defenseless by assuming that you have done them a kindness. This you follow by the assertion that you will "make as much sacrifice for the peace and honor of the South as the best born Southerner." And because I characterized what you call a kindness as being real cruelty you presume to sit in judgment between me and my God and you decide that my earnest prayer to the Almighty Father to save our women and children from what you call kindness is a "sacrilegious, hypocritical appeal." You came into our country with your army avowedly for the purpose of subjugating free white men, women, and children, and not only intend to rule over them, but you make negroes your allies and desire to place over us an inferior race, which we have raised from barbarism to its present position, which is the highest ever attained by that race in any country in all time. I must, therefore, decline to accept your statements in reference to your kindness toward the people of Atlanta, and your willingness to sacrifice everything for the peace and honor of the South, and refuse to be governed by your decision in regard to matters between myself, my country, and my God. You say, "let us fight it out like men." To this my reply is, for myself, and, I believe, for all the true men, aye, and women and children, in my country, we will fight you to the death. Better die a thousand deaths than submit to live under you or your Government and your negro allies.
Having answered the points forced upon me by your letter of the 9th [10th] of September, I close this correspondence with you, and notwithstanding your comments upon my appeal to God in the cause of humanity, I again humbly and reverently invoke His Almighty aid in defense of justice and right.
Respectfully, your obedient servant,
J. B. HOOD,
General.
[Inclosure No. 7.]
HDQRS. MILITARY DIVISION OF THE MISSISSIPPI,
In the Field, Atlanta, Ga., September 14, 1864.
General J. B. HOOD, C. S. Army,
Commanding Army of Tennessee:
GENERAL: Yours of September 12 is received and has been carefully perused. I agree with you that this discussion by two soldiers is out of place and profitless, but you must admit that you began the controversy by characterizing an official act of mine in unfair and improper terms. I reiterate my former answer, and to the only new matter contained in your rejoinder I add, we have no negro allies" in this army; not a single negro soldier left Chattanooga with this army or is with it now. There are a few guarding Chattanooga, which General Steedman sent to drive Wheeler out of Dalton. I was not bound by the laws of war to give notice of the shelling of Atlanta, a "fortified town" with magazines, arsenals, foundries, and public stores. You were bound to take notice. See the books. This is the conclusion of our correspondence, which I did not begin, and terminate with satisfaction.
I am, with respect, your obedient servant,
W. T. SHERMAN,
Major-General, Commanding.

Not being much of a Western Theater guy, I really was not aware of this exchange. Wow....that was fascinating.

Sherman certainly was an ornery fellow, wasn't he?

Thanks for sharing that.

Sherman got off some zingers, that's for sure. It's interesting that both officers carried in their minds a running list of grievances, essentially arguing about who started it (and who would be to blame for the ensuing suffering).