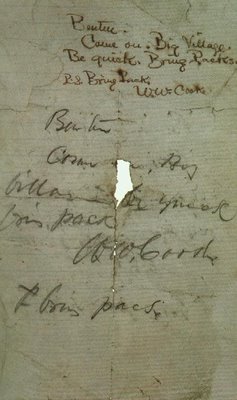 Did I mention that I need you to bring the packs? Pronto? That’s one little note I’m glad was saved. It is, of course, Custer’s last message, written by an adjutant, and carried by a bugler -- one very fortunate Italian immigrant, John Martin (born Geovanni Martini). That little piece of paper proved to be Martin’s ticket to a longer life – good for an additional 46 years. Martin spent quite a few years in the army, finally retiring as a sergeant in 1904, after which he reportedly worked as a ticket taker for the New York City subway (103rd Street Station), a long way from the Greasy Grass. See a later photo of Martin, and his tombstone, here.

The writing at top is apparently Benteen's rendition of what Cooke scrawled. One way or another, by way of Benteen, the note made its way to the United States Military Academy Library. I hope to see it in person one day.

Visiting the scenes of historic events is hard to beat, but history geeks love a good document. I remember when first I laid eyes on Grant's message to Simon B. Buckner, on display at the Smithsonian. There it was, in black and white. I could hardly believe my eyes -- it was just as the books had promised.


HEADQUARTERS ARMY IN THE FIELD
Camp near Fort Donelson
February 16, 1862.

SIR: Yours of this date, proposing armistice and appointment of commissioners to settle terms of capitulation, is just received. No terms except unconditional and immediate surrender can be accepted. I propose to move immediately upon your works.


With obedient servants like that, who needs unfaithful ones?

Since that Smithsonian visit, I've enjoyed many memorable moments looking through our well-preserved documentary heritage in places like the Huntington Library, Library of Congress, and numerous regional repositories. There's something about holding the original of a hand-written, historic document that fires the imagination and gives structure and permanence to the wispy mental images one constructs while reading.

Speaking of historic documents, and speaking of the National Archives -- as I did in the last post -- all Americans need to make the trip to the NARA rotunda, once in their lives, to see the Declaration of Independence, the Constitution, and the Bill of Rights. Get up close and take a look. Powerful stuff.

Of course you Civil War buffs know all about the National Archives. Almost 10 years ago (June 6, 1996), The Civil War Forum hosted an online Q&A session with Michael Musick, Subject Area Expert for Civil War Materials at the Archives. Nobody knows more about the Civil War treasures there than Mike. Here are a couple of highlights from that discussion. Of particular interest, to me, is his answer about some of the most memorable items he's encountered (pasted below). The full transcript is available in the forum (files and messages are treated the same in a search, so select "advanced search," set the range to "beginning of time" and type "Musick" in the keyword box -- that will bring up a plain text document).

from A Conversation with Michael Musick, Thursday, June 6, 1996

CWF: Mike, what one or two things that you've come across stand out most in your memory?

MIKE MUSICK: One which occurs to me is Henry Wirz's order book from Andersonville, which is filed among the records of his trial. Another would be a moving letter from an Illinois mother, whose son was killed at Kennesaw Mountain, seeking to recover his body. There are many similar things in the files.

A third would be a letter from Lemuel T. Conner to Leonidas Polk detailing in passing the suppression of a purported slave insurrection. This has recently been published in Winthrop Jordan's Tumult and Silence at Second Creek. A fourth would be a register of wounded Union soldiers from New York who were patients at a hospital in Alexandria, Virginia. It is tucked in with 11,000 other hospital registers, and contains photographs and biographical sketches of each individual. I came across it through pure serendipity.

A fifth item would be an amnesty application from Nathan Bedford Forrest in which he offers to fight against the French in Mexico as a U. S. officer. A sixth would be my own ancestors draft enrollment record in New York City, and the report of the district provost marshall describing the tenements of German immigrants among which he lived. Another item would be the pension file for the son of Solomon Northup. Northup, Sr. was the author of the autobiography, Twelve Years a Slave, which I found a particularly moving narrative.

Another find would be the patriotic carts de visite found hidden at Mrs. Surrat's boarding house in Washington and entered in evidence at her trial. They include portraits of prominent Confederates, the state seal of Virginia, with the motto "Virginia the Mighty," and other such pro-Confederate items. Another would be the humorous photographs and drawings of military inventions submitted to the Union's chief of ordnance. Many of these have subsequently been published.

For those interested in firearms, a particularly nice discovery were some lists of serial numbers of Civil War pistols and carbines. Many of these have subsequently been published also. Another find which was enjoyable for me were some letters of Shelby Foote's ancestor, Hecekiah Foote, among the records of the Confederate Secretary of War.


CWF: Historian Bob Krick wrote in the acknowledgments to one of his books: "It is literally impossible to do adequate research for a serious Civil War book without Mike's collaboration." How, specifically, are you able to help scholars such as Krick?

MIKE MUSICK: I will interview the prospective researcher in person, or on the telephone, eliciting as best I can what that person is looking for. I try to find out where he lives, and how much time he can spend on his project. We, meaning I and my colleagues, must generally recast questions into a form that relates to our holdings. and how they are arranged and described. Often, we make people aware of other institutions and resources which will help them. You don't need to deal with me if you are doing a standard search for service and pension records.

Also, Bob Krick's kind words notwithstanding, I have a number of extremely capable colleagues who can help researchers at least as well as I. I will try to explain the Archives system to researchers, identify records which may be helpful, and explain how to go about ordering them and obtaining copies. If I know someone is interested in something, when I come across pertinent documentation, I can try to contact that person, perhaps even years afterwards. As someone who has been around a long time, with a keen interest in the War, I may well have come across something relating to the subject at hand, which has stayed in my mind. An example might be Dr. Tom Lowry and his studies of sex in the Civil War. Those kinds of documents one tends to remember.
Comments on this post may be made here.